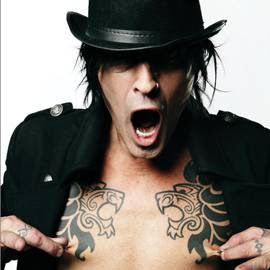 Just got this link from the kind folks at Roadrunner Australia about Tommy Lee’s new album (good timing after yesterday’s Motley Crue article). It seems Tommy’s taking a cue from Nine Inch Nails in offering unmixed track stems for fans to tweak and remix however they want. But wait! The key difference here is that the stems are from Tommy’s work-in-progress CD, and he might actually end up using your contribution on his album! This could be an awesome way for guitarists to get exposure, or at least a neat way to get free legal backing tracks to jam over!

Here are some details:

Tommy Lee, the staple A list Hollywood rocker, has been working hard on the new Methods Of Mayhem record. What you might not realise is that this is not your everyday, run of the mill record. You can actually be apart of it!

At his website http://www.thepublicrecord.com/, Tommy Lee has been posting up unfinished tracks (called stems), which can be downloaded by you the fan. Then you have free reign to record whatever you want, on whatever instrument over the top of Tommy Lee’s tracks. Once you’ve recorded what you think might make the cut of the record, simply upload and Tommy will do the rest!

Public Mayhem is the fitting title for the new album and Tommy Lee, along with the legendary producer Scott Humprhey, has been updating The Public Record website nearly everyday with video updates showcasing the progress of the album, and the material that has been sent in by fans across the world.

Click here to read Tommy Lee’s letter to Bob Lefsetz, defending The Public Record after being attacked by Lefsetz in the media.