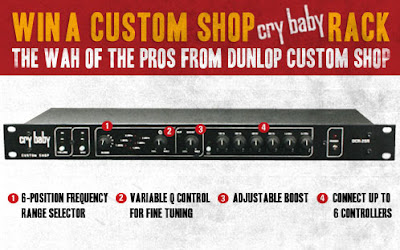 Jim Dunlop is giving away a Crybaby Rack Wah at their site. Now, these units seem pretty hard to come by and they’ve been used by some of the biggest names in the biz. Personally I use a Jim Dunlop Buddy Guy Crybaby and I love it to bits, but I’ve heard such continually high praise for the Crybaby Rack Wah that it’s almost worth going the rack route just to have one for the bragging rights!

Here’s some info on the giveaway on the Dunlop blog.

The Crybaby Rack Wah – the ultimate in control and versatility. Found in the top studios and racks of the world’s best guitarists, the Crybaby Rack Wah is usually reserved for the guitar industry’s elite few. Many swear by it because they can dial in the exact tone they hear for each gig and situation. Well guess what? This month we’re giving one away.

TO ENTER CLICK HERE TO BE DIRECTED TO THE CONTEST PAGE!

For premium, rich and vocal tone, this King of Wahs is versatile enough to handle an astronomically wide spectral range of Wah sound. Dial in anywhere between a vintage sounding thin “quack” to a fully powerful throaty “growl” with a six position switch that lets you select your sweep frequency range. Then for fine-tuning use the on board EQ and the variable Q control, which allows you to determine where the shape lies in the frequency. Go +10db of boost on up to six controller inputs for coverage anywhere onstage. Used by the pros and serious Wah players.