Here’s some cool news about a new signature pickup release by Seymour Duncan for Slipknot guitarist Mick Thompson. These new pickups are based on the Blackouts, which you can read about in my review of the Schecter C-1 BlackJack ATX. 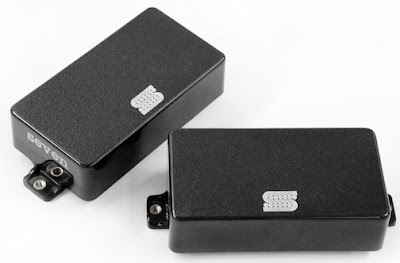 The AHB series conveys a less compressed tone, with a more extended frequency response helping to cancel hum by using balanced inputs. Blackouts are up to 14dB quieter than any other active pickups, while producing more lows, more highs, and more output. Simply put, Blackouts have more tone than other active pickup. And players have noticed the benefits of the reduced hum, especially during recording. Thomson was already an avid fan of the Blackouts when he met Seymour Duncan Head of Artist Relations, Evan Skopp during a discreet backstage meeting at the 2008 Loud Park festival in Japan. Mick stayed involved every step of the way from the precise wiring configuration to the logo and printing on the pickup including his renowned “seven” imprinted right on the side of the cover. Now he depends on EMTY to execute his completely psychosocial tone that defines the Slipknot sound; because to play extreme metal, you need extreme metal tone.

AHB-3 Blackouts EMTY are available as Mick’s two-humbucker set, or in individual neck and bridge models to mix and match with other Blackouts and Livewires Classic II active pickups. All versions come with all necessary mounting hardware, including pots, jack, and a battery clip. For players with active pickups already installed, the EMTY can plug right into the quick connection harness, making it a snap to unplug the old pickup and plug in the new EMTY.