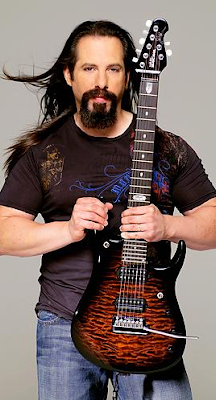 When I looked back on my favourite gear of the year and realised the DiMarzio Crunch Lab pickup was the product that had made the biggest impact on how I played in the past 12 months, I thought, what better way to celebrate the inaugural I Heart Guitar Gear Of The Year award than by talking to the pickup’s inspiration and co-designer, John Petrucci? Dream Theater happened to be in town so thanks to Roadrunner Records John and I had a little chat backstage at The Palais Theatre here in Melbourne on December 7. Here’s the conversation.

I Heart Guitar: So as you know I’ve picked one of the new pickups as my gear of the year…

IHG: The Crunch Lab. That’s my one!

Petrucci: Oh great. What kind of guitar do you have?

Petrucci: Oh great! And it works well in the Ibanez?

Petrucci: And it works good for you? Cool, man!

IHG: So I just wanted to talk a little about the new pickups. So what led to the decision to do these new pickups?

Petrucci: The pickups are like a work in progress, y’know? From the very beginning, even with Ibanez, there were DiMarzios in the first Ibanez that I used, so that started the relationship – Larry DiMarzio, Steve Blucher – and it’s been like 20-years-plus that I’ve been working with them. Steve Blucher is instrumental (CLICK HERE for I Heart Guitar’s interview with Steve Blucher). He knows what I want at this point. He knows what I play through, he knows the Boogies, he knows what the guitar is made out of and he knows what I’m going for. So based on that, he developed the pickups. The pickups have made a couple of changes since they’ve been in the Music Man guitars over the last ten years. And those changes are based on him calling me up and saying, “Hey, I’ve found a way to make the higher strings fatter and the lower strings tighter.” And I’ll be like, “Alright, cool! Let’s hear it!” And he’ll come in, swap out the pickups, and I’ll try it. We had a conversation before I started the latest album about the neck pickup and trying to make that different, get some more clarity out of it. So we finally did that and loved the pickups, loved the way they worked with the BFR, the wood, the way they worked with the Boogies. Then finally Steve said, “We’ve never done a signature pickup for you in 20 years.” So we pretty much both were really, really happy with where the pickups are at now. So we felt it was great timing. We’re not making any more changes. Not to say that we wont! But as of now we’re really happy with them. So then we tried to come up with names, which was real funny.

IHG: What were some of the rejected ones?

IHG: You can’t say it without doing the metal horns.

Petrucci: (Laughs) Exactly, right! I always have to tell people it’s F-I-R-E. I just love the double meaning of that. One of the funny things was trying to think of the spelling for it. Y’know, lick, L-I-C-K W, FIRE…

IHG: The decision to make them available to everyone was pretty cool. People are always going to the Steve’s Special, which I believe are what the original pickups in the Music Man evolved from…

IHG: And now they can have the real thing, which is cool!

Petrucci: That’s a good point, because when I started with Music Man we wanted to really make the pickups only for that guitar, so you couldn’t go out and get only the pickups. So this is the first time we’ve made them available.

IHG: And also with the Sterling by Music Man guitars, people can upgrade the pickups to what’s in the Music Man version.

IHG: Did you use the new pickups much on the new CD?

Petrucci: It’s all of the new CD. All of it. In fact Steve came in and once we nailed it… he actually, at the beginning at the sessions, a lot of times I’ll ask him to do something because I want to hear what it’ll do. And he’ll say “You’re not gonna like it, but I’ll do it,” and we’ll just do it. Or he’ll say “Try this out,” and in doing that you kinda eliminate all the mental chatter. It gets rid of all those questions. You say “I tried all that stuff, and this works.” So we did a bunch of that in the studio, but once we were like, “This is great, I love it,” Steve so kindly came in and changed all the pickups out of my guitars. Out of all the guitars – and I have a lot (laughs). I have an A rig and a B rig, and he changed them all out. So he was changing like crazy.

IHG: So you recently changed your amp rig?

Petrucci: Here in Australia I’m actually using what I call my B rig… I have many rigs, with many different letters, but we’ll call this one the B rig, which is actually a rig comprised of [Mesa Boogie] Mark IVs. I used that rig to do G3, I used it to do Liquid Tension Experiment, I use it when we do fly-in dates – it’s a big smaller. So Mark IV’s down here in Australia. But I did build a new Mark V rig and I used that all throughout the North American run.

IHG: So what’s next after this tour? Are you gonna do another solo album soon?

Petrucci: You know, a lot of people ask me about that, and I did start to write, finally! I got the bug, I got bit by it, I started to write this music and I’ve been in a nice writing flow. So I hope to finish writing the material and get to record next year. So I’m psyched about that.

IHG: Any idea where it’s heading yet?

Petrucci: Yeah, I have a total idea where it’s heading. I don’t like to really talk about it but I think by now people kinda know my style and what I do, and hopefully it’ll be more of that!

IHG: Well that’s our time up.

IHG: Yeah, I love ‘em! They’ve turned that guitar from my backup beater to my main recording guitar.

Petrucci: What did you notice different about it? What did it do for ya?

IHG: The brownness, and the fuzziness but you can still palm-mute stuff and you don’t get that ‘ksh, ksh’ sound between notes.

IHG: And the LiquiFire’s great for the bluesy stuff as well as the really fast stuff.

Petrucci: Yes, that’s a good point. We wanted it to be bright enough that it sounded nice on the blues stuff but where you also really got that pick attack sound. And the bridge pickup, it was more of that: fatten up the high strings, tighten up the low strings.

IHG: And the split sound with the two in single coil mode is kinda thicker and less hi fi.

Petrucci: Yeah, I know what you mean! Cool! Awesome man, glad you like it!

Thanks to DiMarzio, Roadrunner and John Petrucci!