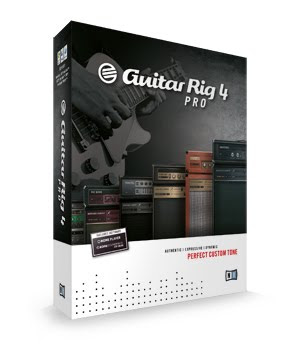 I’ve been using Native Instruments’ Guitar Rig 3 for quite a while – I really dig the edgy clean tones of a few of the models, and am especially into the effects modules. Guitar Rig 4 ups the awesome factor with a wider selection of amp models, once again with effect and micing options all able to be laid out on one screen to make it easier to see exactly what you’re doing. There are now 15 guitar and bass amps and there are several key differences to the Guitar Rig 3, including a bunch of additional Plex models, enhanced virtual microphone control, a master effects section, and true-stereo processing across the entire signal chain. Neat!

Like Guitar Rig 3, a rack of components is displayed on the right side of the screen, including an Input module with input volume and a noise reduction section (you can also use this as a clean boost to push the amp models into overdrive, just like a real amp – there’s a free tip for ya); a Tape Deck module for recording or loading a file to play back through the software – for instance if you wanted to audition various amps for a particular part. It also has pitch and tempo manipulation for learning from a recording; a Tuner module with chromatic, guitar, bass, and various alternate tuning modes; a Metronome module with over two dozen time signatures and a wide variety of sounds for emphasis; another Tape Deck module for recording the entire signal chain, and finally an Output module which includes a limiter section for taming the dynamic range. While I prefer to jam to drum loops I cobble together, the metronome is still very handy to have, and I often use the second tape deck to record song ideas.

Guitar Rig 4 can be used in standalone mode for practice and general riff writing, or as a plug-in for most recording programs. You can also load it onto a laptop and use it in live performance, aided by the Kontrol edition, which includes an incredibly useful floorboard with all your switching and audio ins and outs.

Back to the screen: To the left is a Browser section which lets you choose settings by sound type or amp type, and a Component section which presents visual representations of everything: amps, speakers, effects, etc. The drag-and-drop method of signal chain shaping is very intuitive and it’s fun to mess around with ideas like “What if I took a cranked Marshall head and plugged the speaker out directly into the input of a clean amp?” Try doing that in the real world without getting exploded. Finally there’s an Options section which takes care of various admin tasks.

One of the biggest differences between Guitar Rig 3 and Guitar Rig 4 is the truckload of new Plex models. In addition to the original Plex from Guitar Rig 3, there’s Jump (high-gain take on the classic Plexi tone), Cool Plex (warm but with restrained overdrive when pushed), and Hot Plex, which reminds me of a cross between EVH’s ‘Fair Warning’ tone and the monster sounds Randy Rhoads got on Ozzy Osbourne’s live ‘Tribute’ album. To test each of these out I’ve been chipping away at a track which uses every model in a different way: Hot Plex for a Rhoads style rhythm, Cool Plex plus the flanger stomp model for a dirty clean-toned arpeggio part, Jump for some ringing emphasis chords in the background, and Plex for a Jeff Beck-like, single-coil-and-fingers tone. I would definitely recommend downloading the demo and trying out each of these models within the same track. It’s a great way of comparing their sames and differences. When the track is completed I’ll post it on YouTube and here on I Heart Guitar so you can hear it. 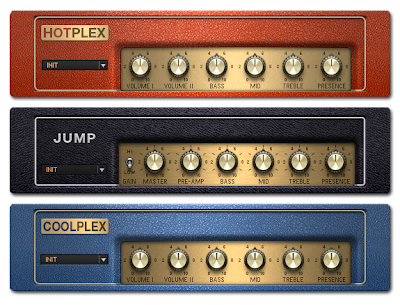 I’m also a huge fan of the Citrus and High White models. The former offers a muscular low end with ringing highs, and the latter excels at open chords in a percussive rock context. I like to use these with my Ibanez Talman, which has PAF-like Ibanez Super 58 pickups, for classic early 70s sounds. Citrus works extra well with the neck pickup and a fuzz pedal model, while High White does the ringing-chord, cranked-valves thing exceptionally well.

I also love the range of tones available from the Gratifier and Ultrasonic models. The Gratifier is by far the best models of you-know-what I’ve ever used. It models each of its channels very accurately, and is great for muscular modern metal riffage. The Ultrasonic is especially friendly with my Ibanez Jem, and the two of them pair up nicely to create Steve Vai ‘first G3 tour’ era tones, especially with a little Quad Delay from the effects section.

The real star of Guitar Rig 4 though is the Control Room module (see pic below), which allows you to mix up to 8 different virtual microphones placed on the one cabinet. You can balance the respective volumes and pan them anywhere in the stereo field. There are universal Air, Bass and Treble controls for overall tone colouring, and although it’d be nice to have individual versions of these for every virtual mic, it’s still an incredibly versatile system which goes even further in aiding Guitar Rig 4’s authenticity. 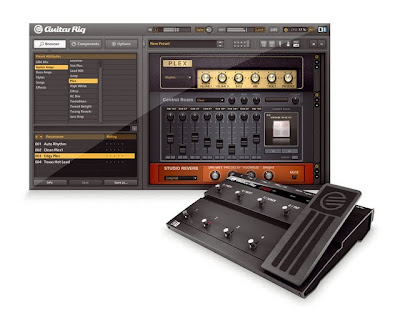 The addition of the extra Plex models and the Control room function are standout features for me, but the pedal models also deserve riotous applause (especially an incredible sounding ‘Cat’ distortion – pair it up with the 800 model for instant Nuno). I tend to keep an open mind to my amp modelling needs so I’ll never settle on a single program, but there are certain things I’ll use Guitar Rig for every time. It also achieves its tonal mojo with less processing power than some other amp sim plugins, which means I spent less time chucking picks across the room in anger when Pro Tools hangs up in the middle of a session, and more time rocking out in glorious high fidelity.