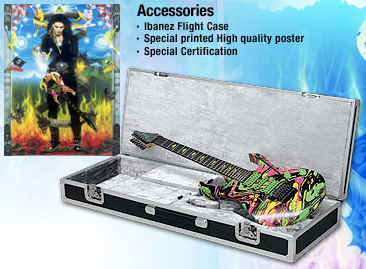 Here’s another of my favourite things from NAMM so far: The TSA. This little amp actually has a Tube Screamer overdrive pedal built in. I heard it yesterday and the tone was refreshingly warm and responsive. Kinda reminds me of Al DiMeola on San Marco (Moderna), the opening track of Consequence of Chaos, and as a result I haven’t been able to get that song out of my head ever since! 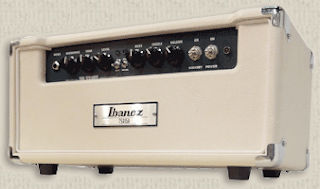 Guitarists normally have to depend on a separate effect pedal to get the distinctive, warm overdrive sounds of a tube amp. No more! The new TSA15H Tube Amp has a genuine Tube Screamer circuit, built right into the front end, for all the warm tube overdrive punch and crunch you’ll need. Includes foot-switchable function, with Tube Screamer Overdrive, Tone, and Level controls. TSA112C speaker cabinet and IFS2G footswitch sold separately.

Great work, Ibanez. I hope to see the line expand into 50 or 100 watt heads some day.

One of the NAMM booths I made a note to return to today is ProCo. I’ve always had a soft spot for the Rat – even though I’ve never owned one, I’ve reviewed a few and the way they respond when beefing up an already overdriven amp is nothing short of kickass. Here’s some news on a few new products Pro Co are releasing this year.

Kalamazoo, MI—Pro Co Sound, Inc., announces the introduction of the new RA1 Reamping Box to its line of TradeTools™ Audio Interface Devices. The RA1 Reamping Box is scheduled for availability beginning in February 2010. The RA1 is planned to be on display at Pro Co’s exhibit at the 2010 Winter NAMM Show in Anaheim, CA January 14th through 17th.

The Pro Co RA1 Reamping box is designed to take line level play back of a dry recorded track and convert it to guitar level. This allows the engineer to take the “best take ” of the day, and feed it through various effects pedals and/or amplifiers. This process is also useful for recreating/adjusting microphone placement for an impending session.

The RA1is built with the highly acclaimed Pro Co MBT-1 Microphone Bridging Transformer. It features a three-way pad circuit for the correct level in each situation. “This is a great solution for the small environment studio owner who wants to use real amp tone (as apposed to modeling) for the creative process,” commented Les Batts, a product manager at Pro Co.

A studio utilizing the reamping process will typically record a reference track through a direct box (such as a Pro Co DB1 or DBA1). The reference track is played back through the reamping unit into the amp and or effects chain of choice. An engineer who reamps will likely have a collection of amplifiers and or effects pedals for a broad tonal palette.

Kalamazoo, MI—A legend returns. Pro Co Sound, Inc., announces the re-issue of its world-famous ’85 “Whiteface” RAT distortion pedal. The Limited Edition ’85 Whiteface RAT will be produced in a one-time limited quantity and is scheduled to be available for distribution as early as February 2010. The Whiteface RAT is planned to be on display at Pro Co’s exhibit at the 2010 Winter NAMM Show in Anaheim, CA January 14th through 17th.

The Limited Edition Whiteface RAT is a re-issue of the RAT model that was in production at Pro Co from 1985 until it was discontinued in 1989 in favor of the current RAT2. The ’85 Whiteface is characterized by its small, square “indestructible” steel enclosure, which was a departure from the large steel boxes Pro Co had been using to package the RAT prior to that time. The ‘85 RAT is further identified by the RAT logo silkscreened on its face. The Pro Co and RAT logos appear reversed out of a white field that is enclosed by a white ruled box. This is where the term “Whiteface” comes from. The RAT gained worldwide popularity in the late 1980’s when its use was publicized by several major artists, including Jeff Beck.

The 2010 version of the Whiteface RAT has been painstakingly researched and designed to produce a pedal as close to the original in appearance and sound as is possible today. This includes the accurate reproduction of the ’85 RAT circuit and the inclusion of the LM308 chip. The LM308 chip is believed to be one of the main ingredients to the famous ’85 RAT tone.

Kalamazoo, MI—Pro Co Sound, Inc., announces the introduction of the new iGate Audio Gateway to its line of Portable Audio Player Interface Devices. The iGate is scheduled for availability beginning in February 2010. iGate is planned to be on display at Pro Co’s exhibit at the 2010 Winter NAMM Show in Anaheim, CA January 14th through 17th.

The iGate Audio Gateway is a rack-mount universal interface designed to conveniently feed the outputs of various “real world” audio sources into professional sound systems. iGate takes a high impedance, headphone, or line level signal from popular sources like iPods/MP3 players, mono or stereo unbalanced line inputs, guitar, bass or keyboard inputs, and computer audio outputs and converts their (various impedance level) signals into low impedance balanced microphone signals that can be inserted into any professional mixing console. It’s like having an iFace and DB1 all together in a convenient single rack space package. A low impedance microphone pass thru input is also included as a convenience to the operator/user.

The rack mount package makes the iGate ideal for use in studio, live sound, education and corporate audio applications. It is housed in Pro Co’s rugged 19-inch “Unibox” enclosure with easy-to-read laser-etched control graphics on both the front and back panels. Each iGate is hand crafted and tested by Pro Co, in Kalamazoo Michigan, and comes with Pro Co’s no nonsense “Any Excuse, Even Abuse” warranty.