I certainly make no secret about my Devin Townsend geekiness, and as you may remember I’ve been excited about the forthcoming Peavey Devin Townsend signature model for some time. The extreme awesomeness of Devin’s current album Addicted has only increased my gearlust, and I finally got my hands on the new model at NAMM. Here’s a photo I took at NAMM – note that the version on display has a different bridge and a neck pickup that aren’t present on Devin’s original one as seen on the display behind the guitar. 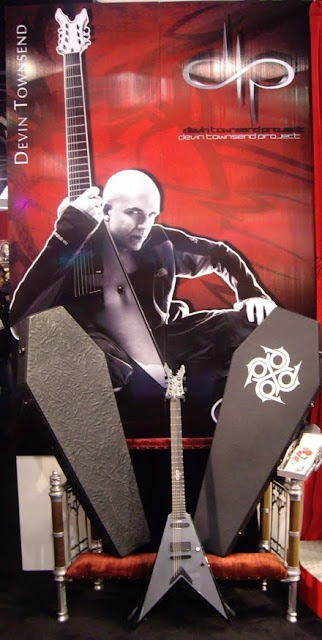 Let’s zoom in to the guitar itself, shall we? Note the cool DTP (Devin Townsend Project) logo at the 12th fret. 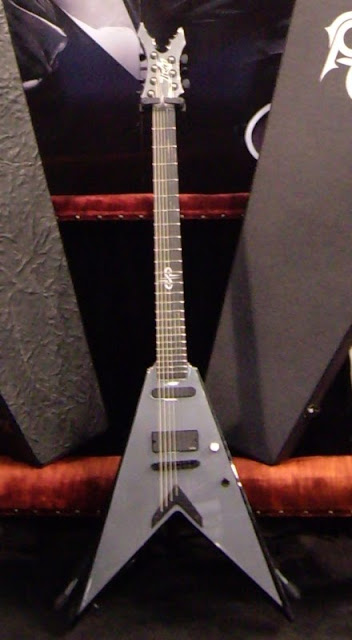 And here’s the press release:

“When Peavey and I decided to collaborate on this project, I knew that I wanted an instrument that could crush everything while maintaining a high level of quality and elegance,” said Townsend, the renowned producer and mastermind of The Devin Townsend Project and Strapping Young Lad. “This quest has redefined how I view the guitar. To have a company that knows how to get things done behind me with a metal axe like this is a real sense of power.”

The PXD Vicious Devin Townsend Signature Model has a 28″ baritone scale, seven strings and a maple neck-through-body design that gives the instrument incredible sustain. A pair of EMG pickups—including a custom EMG 81 7-string humbucker in the bridge position and an EMG 7-string single coil at the neck—give Devin’s Vicious guitar menacing rhythm and lead tones, as well as striking clean tones in the neck position. This gun-metal gray guitar is appointed with locking Sperzel® tuners and an ebony fretboard with jumbo frets.

The Peavey PXD Vicious™ is available in two additional models with a range of feature options, including an adjustable bridge with a string-through design and Coffin Case® hard cases or gig bags. PXD guitars feature high-output Peavey VFL™ active pickups or EMG® 60 and 81 pickups with the EMG Afterburner™ tone circuit, which boosts input gain up to 20 dB for the highest levels of saturation anywhere. See below for full feature options in the Peavey PXD Vicious guitar line.

The Peavey PXD Series is a new breed of extreme electric guitars that captures the aggression and attitude of modern metal players. With supercharged active pickups coupled to menacing slabs of tone-sustaining mahogany, the Peavey PXD Series is the sound of aggression and the perfect complement to the legendary Peavey 6505® Series guitar amplifiers. True to the music that inspired them, PXD Series guitars are built for speed, slicing leads and razor-sharp riffs.