One of my favourite stops during NAMM was at the Performance Guitar booth in Hall E. I’ve heard of Performance for many years and I know that both Frank Zappa and Steve Vai were early fans of the company, but apart from playing one for about 30 seconds at a guitar clinic by Aussie shredder Joe Cool when I was about 16, I’d never seen one close up. A recent Premier Guitar feature on the company piqued my interest further, so when I saw them at NAMM I zoomed right over to say hello and check out their gear.

I knew about Performance’s guitars, but let’s face it, their guitars come with a price tag which is as high as their quality level (ie: you get what you pay for, which is a good thing!). But what really surprised me was their pedal mods under their TTL (Top of the Line) brand. At NAMM, Performance had set up a rig where you could A/B the modified and unmodified versions of various pedals. I was particularly taken by their Boss DS-1 mod. Performance’s website says: 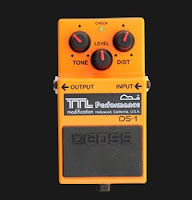 Original Characteristics:
The original DS-1 has a simple, yet well designed circuitry. It has the right amount of gain and the symmetrical distortion produced by diodes.

What has been Modified and Improved:
The input impedance has been changed to the tube amp standard of 1MΩ. Improvements have been made in the area of picking nuance, quicker response time, and overall sound definition. The even harmonics, especially the second harmonic, have been emphasized to recreate the sound of a fully-driven tube pre-amp. This resulted in the thin sound becoming eliminated completely and the overall sound becoming much richer. The gain factor has been re-evaluated at various frequencies to achieve great distortion, even with a single coil pick up. With respect to the original design principle, no switches were added and overall modifications were kept simple.

The company makes a couple of its own pedals too, including the FZ-85, a filter modulation pedal designed in collaboration with Frank Zappa in the 80s. The site says: 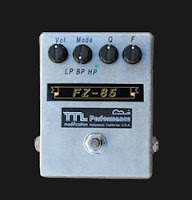 There’s an early ’80, Frank Zappa wanted special his own sound. Frank and we collaborate each other to make special effect for Frank. It control and emphasize the particular frequency. This effects pedal has 3 mode select SW. There are low pass mode, band pass mode, high pass mode.

I was also blown away by the Snake Skin guitar (autographed by Warren DeMartini of RATT) which I used when testing out the pedals. It was very responsive to pick attack and despite the hard rock vibe of the snake skin finish I found it great for bluesier, Hendrixy riffing.

Here are my photos from the Performance booth. Check out that Vai-style flame guitar! 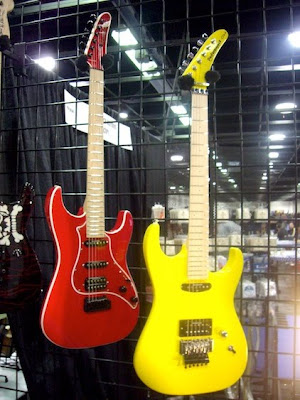 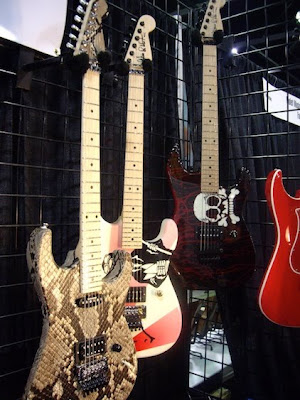 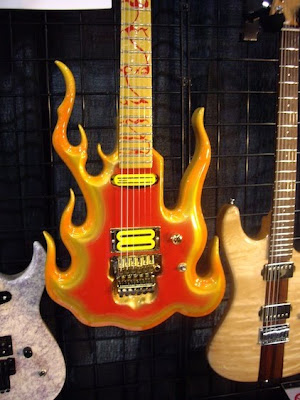 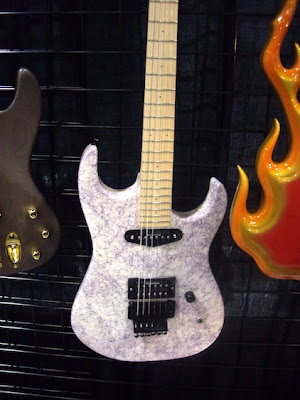