I’m all for pushing the envelope in pedal design (actually, I really wish this was an article about an envelope filter), so I’m super-psyched about this new Keeley phaser. Who wants a mere second or two phasing duration when you can stretch that sucker out over a full ten minutes? I’m almost tempted to get one of these, jam some white noise into the front end, set the duration to ‘so slow you won’t even notice it actually changing until 5 minutes later,’ plug it into a loooooooooong delay and use the results to create a new subgenre of new age. Nobody steal my idea, please. 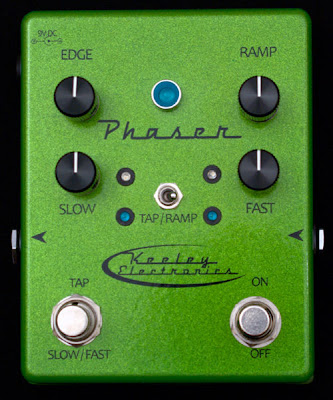 The Keeley Phaser is the first OTA analog phaser with tap tempo and Leslie style ramping. The control of the pedal is separated into two modes: Tap mode and Ramp mode. In Tap mode, the pedal’s phase rate can be controlled by a tap tempo or the speed knob. The Keeley Phaser is the first analog phaser to offer both tap tempo and speed knob options in one pedal. The tap tempo is capable of producing very slow speeds. The slowest phasing recorded to date is ten minutes, which appears to be the record for an analog phaser! When using ramp mode, the second footswitch becomes a way to change between fast and slow speeds that are set by knobs on the pedal. Users can switch between two speeds in an instant or have the pedal gradually go between speeds.

OTA style phasers are well known for their lush sound and shimmery characteristics. This six stage phaser delivers with great sound in any mode. High quality components are used in every part of the signal path.

Again, we are shipping the first pre-orders of the Keeley Phaser on Monday, January 4, 2010. The current price is $249.00.
LINK: Keeley Electronics.