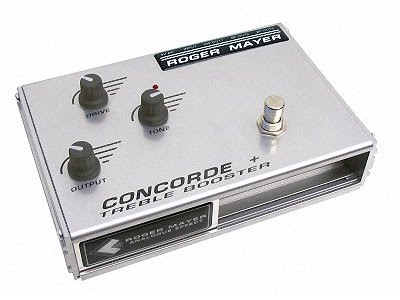 Ok, you’ve got your fuzz, your overdrive, your distortion and your clean boost. That’s all, right? Wrongo. The treble booster is an almost-forgotten member of the distortion family, and without it we wouldn’t have such classic tones as Black Sabbath’s ‘Paranoid,’ pretty much all of Led Zeppelin 1, and everything Brian May’s ever done. So what’s a treble booster and why is it different to just turning up the treble knob on the amp? Well not quite a fuzz, not quite an EQ, treble boosters were typically based on very simple circuits and they promoted the idea of boosting the strength of the signal to the amp while tailoring its tone curve to attain maximum tonal goodness.

The Concorde +, like the other pedals in Roger Mayer’s Vision Series, has controls for Drive, Tone and Output, a sturdy and stompworthy footswitch, twin buffered outs and a hardwired bypass out, an input, a slidable battery cover and a super-strong casing. The electronics combine a low noise class A silicon drive circuit with passive tone shaping to drive a fully optimised germanium treble booster, allowing you to add drive and distortion with EQ before the actual treble booster section – think of it kind of like two pedals in a signal chain, which you can balance for the perfect interaction.

Mayer notes that you can also set the silicon drive section to drive the treble booster section much harder than any guitar pickup could ever do, without any added distortion but with the added feature of having EQ prior to the treble booster, so you get the qualities of soft germanium type distortion overload characteristics or more radical germanium distortion sounds.

Using an alder-bodied, Bigsby-loaded Ibanez Talman with vintage-output Ibanez Super 58 pickups, I flipped to the neck pickup and unleashed my inner Iommi for some ‘Paranoid.’ With a setting of about 3 o’clock on the Drive control and 2 o’clock on the Tone, there was just enough dirt and grizzle around the notes but still punch and definition on the low end. If you turn up the Drive a bit further you get a fuzzy buzz between the notes which works great for sludgier riffage. There are also some great Jimmy Page tones available. With everything set to the midway point the Concorde + is perfect for ‘Whole Lotta Love’ and ‘Communication Breakdown’ – that barky, aggressive tone which begs for you to alternate between muted chugs and chord stabs. Wind back the Drive control a little for a bright, punchy clean tone which begs for heavy gauge strings and single coil country licks.

The Concorde + isn’t just for the player who wants to get closer to those classic Page, Iommi and May tones; it’s for the experimentalist seeking new levels of tone control, or anyone looking for a different character to their overdrive and distortion.