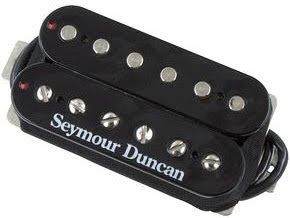 Seymour Duncan’s Blackout and Livewire active pickups are utterly killer, with their unprecedented power and monster tone, but not everybody wants to play actives. Some don’t like their attack, some don’t like their tone, some don’t like their headroom. Some simply want a fat-sounding humbucker with plenty of output. For them, Seymour Duncan offers the Alternative 8 passive humbucker. The 8 in the Alternative 8’s name is derived from the Alnico 8 (Aluminium/nickel/cobalt alloy) magnet at its heart – in fact, this pickup marks the first time this magnet has been used by Seymour Duncan.
The Alternative 8 has a DC resistance of 17.68k, making it one of the hottest passive humbuckers in Seymour Duncan’s history, almost stepping on the toes of the mighty Distortion Parallel Axis, a ceramic magnet humbucker which weighs in at an imposing 21.3 k. The pickup features hot coils wound for maximum output, enhanced further by the natural qualities of the Alnico 8 magnet. While a ceramic magnet might sound tight and bitey, Alnico adds warmth and presence to the midrange as well as the upper mids, while reeling back a little on the fizzy buzz factor inherent in ceramic magnets.

END_OF_DOCUMENT_TOKEN_TO_BE_REPLACED

When the Morpheus Droptune debuted a few years ago, it was the first pedal to offer reliable polyphonic down-tuning. Other pitch-shift pedals might have offered the ability to drop the pitch of everything you’re playing and to fade out the original note, but they weren’t specifically designed to sound good with chords. The Droptune changed all that, offering up to 3 1/2 steps down as well as full octave drop and octaver effects. It was, to put it bluntly, freaking cool. Next came the Capo, kind of a ‘reverse Droptune’ which allowed the user to virtually tune their guitar up by up to 3 1/2 steps, as well as featuring octave up and 12-string effects. Again, it was super-cool.

The Bomber is cut from the same cloth as its two predecessors, but it approaches its task from a slightly different perspective. It features pitch up a second, fifth, one octave or two octaves, as well as pitch down a second, fourth, fifth, one octave or two octaves and a 3-octave-down Dive Bomb mode. It’s not designed to replace your Droptune or Capo exactly, because while it is able to polyphonically shift your guitar sound up or down, it offers a smaller selection of intervals with which to do so, while providing foot pedal control.

END_OF_DOCUMENT_TOKEN_TO_BE_REPLACED

Wah can be an incredibly expressive effect, but it’s hard to find a wah unit that is perfectly suited to bass. And it’s even harder to find one that’s suited to grooving bass. Oh sure, anything with a low enough frequency range can handle the intro to “For Whom The Bell Tolls” with a bunch of distortion, but what about if you need a phat, philthy, groovy pulse? Source Audio think they’ve found the answer: the Tri-Mod Wah, from the company’s Soundblox range, offers three flavours of (mostly) automatic wah wah effect – Low, Bandpass and Multipeak, through eleven distinct variations.

END_OF_DOCUMENT_TOKEN_TO_BE_REPLACED

If you follow me on Twitter or the I Heart Guitar Facebook page you would know that a couple of nights ago I had the incredible honour of jamming onstage with Steve Vai at his Alien Guitar Secrets masterclass here in Melbourne. It was an amazing experience and when my buddies at Gibson.com heard about it they asked me to write a few words. ‘A few’ quickly turned into 1200 or so but what the heck, I like long articles. If you want to read about my experience, check the article out here. And a big big big thanks to Thump Music for making a dude’s dream come true.

(Oh and if you’re wondering, it was a tough decision but the guitar I chose to use was my Ibanez UV777BK Universe with DiMarzio Crunch Lab and LiquiFire pickups).

On the weekend I was one of the guest judges at the Demon Rock Off at Rockstar Bowling (along with Leah Gallin from The Sound Lab, Joe Matera, Dylan Boyes from The Fireballs and Greg Agar from Syndicate. Oh, and Satan.