If you’ve ever spent any time hanging around a guitar-related Facebook page or forum, you’ve probably found yourself tangled up in a debate about the nature and origin of tone. Is it all in the fingers? Is it all about gear? If it’s a combination of the two, what’s the ratio? Can you sound like Player X if you get their exact same equipment? Is signature gear just an elaborate red herring to make us think we’re buying the same stuff some guitar hero uses, but in reality they’re using one-off custom equipment forged in some far-off village by a guitar-building hermit?

Well unless science comes up with some kind of algorithm for quantifying the exact percentage of influence each factor has in tone generation – from the material and gauge of string to the density and pressure of the fingertip pushing it down, to the various gasses and particles in the air between the speaker and the listener – I don’t think this one will ever be resolved. Certainly as long as companies design signature gear with famous axemen, there will always be fans buying that gear so they can tap into some of their hero’s mojo.

My theory on this whole matter is that there are two completely separate factors at play: tone and sound. They both conspire to make a player who they are, but they’re both completely different. Even though they sound the same. Confusing? You bet. I’m only on my first coffee of the morning and I think I just gave myself a headache.

Here’s how I see it. ‘Tone’ can be summed up as anything and everything that conspires to make up the rawest qualities of the output of the guitar: the type and construction of the pickup, the string gauge, the guitar’s body wood, bridge type, construction (is it bolt-on? Set neck? Neck thru?), potentiometer values, the type of cable, any pedals, the type and design of the amp, the settings on that amp, the speaker wire, the speaker, the mic recording it, the room it’s being recorded in, and on and on and on. Imagine if you could rig up one of those chair-testing machines at Ikea – you know, the ones that simulate a butt plonking down on a cushion 100,000 times over a week – to strum a single open-string note on Joe Satriani’s guitar while plugged into his rig. Then, if you constructed an identical rig, with the exception of tiny variables such as changes in the guitar’s wood over time or differences from plank to plank and any possible minute variation of circuit component values, the tone of the two rigs should be very much the same, and measurable for frequency content and stuff like that. So why is it so hard to sound like Player X even if you buy their exact same gear?

My feeling on that is because it’s not just their tone that makes them identifiable, it’s their sound. We’ve all heard the saying ‘tone is in the fingers.’ But I think that’s a bit misleading. While certain picking and fretting techniques can introduce a little more treble to the overall sound, for instance, you can’t exactly simulate a Dimebag-style scooped-midrange EQ curve just by changing the pressure of your fretting fingers or something. So what exactly does ‘tone is in the fingers’ mean? Does it mean there’s an unquantifiable X factor inherent in an individual’s fingertips, separating the guitarists from the mere guitar-players?

To me it refers to the way a guitarist interacts with their rig to influence the relationships between each item within that rig. In a recent posting at a guitar forum I visit, a user said they had Steve Vai’s exact amp, guitar, pickup and pedals but they didn’t sound like him at all, and they wanted to know what piece of gear they were missing. My feeling is that if you’re after Vai’s sound and you already have the amp, guitar, pickup and pedals, then what’s missing is that you’re not playing the way he does, which means the rig isn’t responding to the input of your fingers the way his rig responds to what his fingers are doing. You may have the tone, but not the sound.

So perhaps, if my little theory is true, then tone isn’t in the fingers after all: it’s in the ears. Your fingers are guided by what you hear, and if you find that you like the way a certain rig responds when you strike and manipulate a note or chord a particular way, then your fingers will retain the muscle memory to make it happen, and it will become a part of your style. 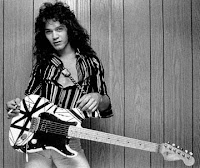 When I was 13 and had been playing guitar for a few years, my teacher taught me Van Halen’s version of ‘You Really Got Me.’ He said something that made a huge impression on me – something like, “The cool thing about Eddie Van Halen is that he’s so in control of everything he does on guitar that he can make every note sound exactly the way he wants it to.” That one sentence (or at least the general content of it, since it was a loooooooong time ago and I don’t remember it word for word) was a more important lesson than my teacher ever could have known, because it made me think about how the string responds to everything a guitarist does. I started experimenting with different fretting pressures, different types of vibrato, different picks, different pick grips, different ways of applying phrasing after striking a note, and all sorts of time-consuming stuff like that. I started to notice that if I did something a certain way, it sounded like a certain player, and I got to be a pretty good mimic, to the point where it was kinda my party trick at a regular blues jam I used to play at, that the other guys would call out the names of famous guitarists and I’d have to play like them.

It was a handy skill to have because it taught me to think a bit more about phrasing and just generally interacting with my guitar, although the downside is that perhaps it might have taken me a little longer than I would have liked before I found my own style. Still, I don’t regret being a guitar impressionist for a few years there, because inevitably these little tricks mutated through my own tastes and experiences, and now, for better or worse, I pretty much sound like me.