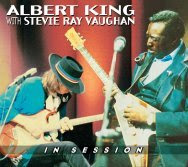 Y’know, just last night I was thinking “It’s about time I went through another SRV-listening phase.” Then this morning I found this in my inbox:

Among blues guitarists and fans of the craft, Albert King was the master. Austin, Texas’ Stevie Ray Vaughan, 31 years King’s junior, exploded onto the scene in 1983, first as guitarist on David Bowie’s “Let’s Dance” followed by his own smash hit “Pride and Joy.” When the two met onstage at Antone’s in 1973, they formed an ongoing friendship. This bond culminated with the December 1983 live recording titled In Session. This remastered version of the 1983 performance by two blues legends is the only known recording of them playing together.