Hey folks. Well, Christmas is over (along with its general pressures and stresses), my massive magazine deadlinepocalypse is now behind me and I can get back to working on the fun stuff. Like music. This week I recorded a track using solely my Ibanez Iron Label 8-string with Seymour Duncan Pegasus and Sentient pickups. In this case I wanted to just use the Sentient so I could show off just how versatile it is, so that’s all you here here, on every guitar part. Even the ‘bass’ is actually the 8-string with the lowest string tuned down to E. I used IK Multimedia’s AmpliTube 3 for amp sims and T-Racks Custom Shop for EQ and dynamic processing, in Presonus Studio One for recording and mixing. The drums are Drumkit From Hell Superior by Toontrack. And here’s the song, with a little more info about it afterwards…

END_OF_DOCUMENT_TOKEN_TO_BE_REPLACED

I’ve long been a big user of IK Multimedia’s AmpliTube series – while I use quite a lot of different amp sims, I definitely return to AmpliTube the most often, and no less a discriminating pair of ears than Steve Vai’s complimented me on the tones I pulled from AmpliTube 2. (Well, the mouth part of Steve Vai said that, not his ears… but I kinda backed myself into a corner with that sentence and the only way to get out again was to write this sentence…). Well now IK Multimedia is launching AmpliTube 3, and it looks like it’s going to be absolutely killer, adding some monster sounds from AmpliTube Jimi Hendrix and Metal, as well as quite a few other additions and improvements. The addition I’m most excited about is the freely movable microphone placement. Awesome! 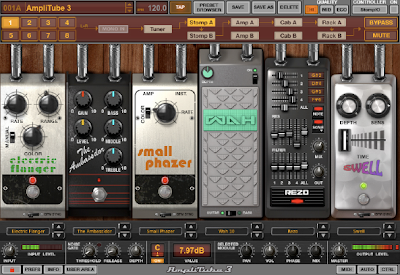 Take it away, press release:

January 2010, Modena, Italy – IK Multimedia is proud to present AmpliTube 3, a massive upgrade
of the leading guitar and bass tone gear-modeling software. AmpliTube 3 raises the industry standard of sound variety, realism and creative power – with over 160 precisely modeled pieces of vintage and modern gear available in one package, it is the ultimate tone gear collection for players, producers, engineers.

More Gear — Infinite Combinations:
AmpliTube 3 contains over 160 pieces of gear, more than double the amount of other packages,
including models from the most sought-after vintage collections and modern day workhorses. You’ll get 51 individual stompboxes and effects, 31 amplifier, preamp & power sections, 46 speaker cabinet models, 15 high-end stage and studio mics, and 17 post-amp rack effects. Plus, with the new AmpliTube 3 open architecture, you can add more packages as you need them, like AmpliTube Fender™ and Ampeg® SVX.

More Feel — True Dynamic Response:
AmpliTube 3 gear models give you THE most realistic playing feel — not just the tones — but the actual dynamic response of their hardware counterparts. Nothing comes closer to the feel and touch of playing through a real rig than AmpliTube 3. Plus, with IK’s proprietary VRM™ (Volumetric Response Modeling) technology, you can add ultra-accurate rotating speaker effects, free dual mic placements, plus room ambience and response to customize and craft your tone.

More Power — Creative Inspiration:
Face it — the better you sound, the better you play. AmpliTube 3 unleashes more creative power than ever, helping you to easily carve new, truly unique voices for your guitar, bass, keyboard, drum and vocals. Our new creative effects let you create sounds you’ve never heard before, and the new “drag & drop” effects’ configuration feature lets you quickly experiment with effects in the signal chain to get that totally unique sound.

More Tone — Every Sound You Can Imagine:
AmpliTube 3 is the voice for your soul. With the largest collection of ultra-accurately modeled gear, creative effects and flexible routing features, you’ll never run out of sonic possibilities. Every sound you’ve heard before, and even ones you haven’t dreamed of yet…find them here in AmpliTube 3.

More Gear. In fact, twice as much gear!
– Over 160 gear models included (with nearly 100 added models), more than double the amount
of other packages, from the most sought-after vintage collections to modern day workhorses
– 51 Stompbox effects, 31 Amps, 46 Cabinets, 15 Studio Mics and 17 Rack effects
– 30 brand new models for the most complete anthology of gear, ever
– 70 re-worked and superior sounding models from packages like AmpliTube Metal™ and
AmpliTube Jimi Hendrix™
– A new collection of bass gear models makes it also the most complete package for any bass recording or performance needs’ musician or engineer
– Can be directly expanded with packages like AmpliTube Fender™, Ampeg® SVX™ and future packages
– New preset management and keyword system allows you to organize and quickly recall the massive library of included and custom preset tones

More Feel. Nothing even comes close to AmpliTube 3…
– New cabinet module inside now provides double miking per cabinet, with freely movable microphones thanks to IK’s VRM™ (Volumetric Response Modeling) technology, giving you a level of control and sound accuracy never before experienced in software
– New impulse-based reverbs are now used in the entire chain, from spring reverb to room ambience, which ensures the most realistic possible representation of your recording environment
– New rotary speaker module sets the new standard for accurate emulation of these types of cabinets – until now, there had never been such a great sounding rotary cabinet in software
– All models in AmpliTube 3 have been ultra-accurately “remastered” with our new 3rd generation modeling technology (the same found in AmpliTube Fender™), using IK’s exclusive DSM™ technology (Dynamic Saturation Modeling), then painstakingly “A/B” compared with the originals to ensure that the sound you hear from the software is the same sound you hear from the gear 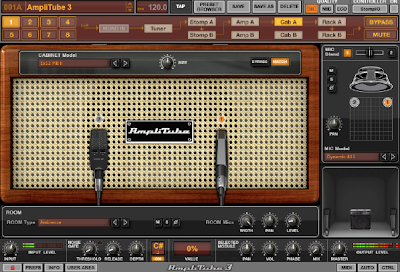 More Power. Unleash more creative power.
– New creative Effects featuring the new StepFilter, StepSLicer, TapDelay, Rezo and Swell stomp
and rack effects that allow you to sculpt your sound and create inspiring rhythmic patterns or
amazing drone and pad-like effects
– New full-stereo path allows you to use the huge collection of analog and digital effects on your
vocal tracks, keyboards and drums
– New Drag & Drop function in the stomp and rack modules now makes experimenting with
effects’ combinations a breeze
– New “MIDI Learn” feature allows you to assign any software control or parameter to an
external controller with a simple click on the parameter’s knob
– New, integrated 4-track recorder/player allows you to capture and layer your ideas quickly and easily right at the moment of inspiration.

Preorders are already available in the IK Online Store and in our network of selected dealers and distributors worldwide.