Wow, check this out: some pics posted by Takeshi Ishiguro, taken at the Musical Instruments Fair Japan 2014 featuring some new additions to Ibanez’s Indonesian-made Premium line: the AT10 Premium Rosewood Andy Timmons model and, in the background there, the PGM800 Premium Paul Gilbert model. Andy has been playing a version of this white axe onstage recently. And of course Paul is on tour with Mr. Big playing all sorts of beautiful Ibanii.

I know what I want for my birthday.

PRESS RELEASE: From August 11-15, 2014, musicians of all ages and levels will converge in California’s scenic Central Coast for the G4 Experience with guitar virtuosos Joe Satriani, Paul Gilbert, Andy Timmons, and Mike Keneally. This unique music camp that combines entertainment, education and a vacation experience will be held at the picturesque Cambria Pines Lodge in Cambria, California, halfway between San Francisco and Los Angeles.
END_OF_DOCUMENT_TOKEN_TO_BE_REPLACED

“I was on MTV with Danger Danger, and I met the artist relations guy and I said “I think Ibanez is a company I’d like to deal with. That’s where I imagine myself being.” And he basically said “We love you but we hate your band. We want to work with you!” That was the beauty – that complete honesty. That honesty prevails in my relationship with Hoshino to this day. It’s all about quality, and that’s really important to me.

“Once we came up with a guitar that I felt was home, back in 1994, I felt like I’d found a guitar that was for me. Several years later, when I was heading in more of a solo direction, we developed the AT-100. And the main thing for me on that guitar that was so important was that I wanted it to be exactly like my guitar. I thought there was no point in having a signature model if it’s not what I play. So along the way we were developing it, and I of course chose the most expensive option at every turn! But it was more about integrity. The neck had to feel right, it had to have the versatility and it had to sound like my guitar. And I still pick up production models of the AT-100 and some of them sound better than my old guitar. But I just won’t let that one go until it falls to dust. My luthier has suggested that if I have a few of these guitars, I should start playing them because that one’s going to fall apart! END_OF_DOCUMENT_TOKEN_TO_BE_REPLACED

Check out this great video from DiMarzio of Andy Timmons talking about his Ibanez AT100 guitar and DiMarzio AT1 humbucker (as well as showing some love for the DiMarzio Cruiser pickup too).

CLICK HERE to buy the DiMarzio AT-1 from Musician’s Friend.

Thomann has now updated their website with a photo of the Ibanez AT100CL-SB, the newly reissued Andy Timmons signature guitar which will be out in 2009.

Thomann has opened up preordering for new 2009 Ibanez guitars, and while not all the photos are on the site yet, you can tell a lot from the specs. They’re talking about these over at the official Ibanez forum and at Jemsite, which is where I first heard about the Thomann links, so I figure it’s ok to re-post the info here now that it’s out there in the public domain.

No news yet on the rumoured Paul Gilbert Fireman (reverse Iceman) or new Steve Vai Jem models – let’s wait and see what else is posted on Thomann before NAMM in January.

Regarding the reissued Timmons model, Andy recently posted the following on his website: 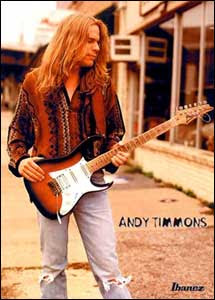 I’m very proud to announce that Ibanez and I have agreed to re-issue the original AT100 on a global scale. As opposed to the original AT100 which was a limited production (we think @ 300 were made), the AT100CL will be available worldwide and will be made to the exact specs as the original including the hand shaped neck!!

As you may recall, I announced a while back that I had parted ways with Ibanez and that I just wanted to play whatever I felt like playing. I never had any intention of signing with another guitar company as many had speculated. I did get approached by many companies once word got out (which I was very flattered by) but it was more important to me to remain independent and avoid a reputation as an “endorsement hopper”.

What I discovered in this time period is that I do love to play Strats occasionally as well as SG Specials, Teles and Les Pauls but nothing feels like “home” like my original AT100. Tone, feel and expression. It’s truly MY guitar.

As I was coming to this realization, Hoshino invited me to play for their 100th Anniversary concert in Japan w/Steve Vai and Paul Gilbert. I was very honored to be asked to do so and I thought it was cool for them to ask considering I wasn’t currently an endorsee. During my visit they approached me with the idea of re-issuing the AT100. It was just perfect timing…it felt “right”!

I know there has been a lot of interest in this guitar in the past, so I’m so happy to say that it will finally be available in 2009!

The guitar will be unveiled at the January NAMM show (and available for pre-order) in Anaheim and should be in stores by Spring.

The Andy Timmons Band will appear opening for Paul Gilbert and Racer X as part of the NAMM festivities. Good stuff indeed.