You may remember Scott Ian of Anthrax discussing his badass Jackson King V in our interview recently. This incredible guitar is now available to the public in two versions, including a USA-built behemoth. Jackson has also announced new signature models for Misha Mansoor, Phil Collen, Mark Morton and Dave Davidson. END_OF_DOCUMENT_TOKEN_TO_BE_REPLACED

Anthrax has done what few bands get to do: put out one of the best, most memorable, most crushing albums of their career a good three and a half decades in. For All Kings is everything you loved about Anthrax, amplified and brutalized. Scott Ian’s rhythm guitar is as aggressive and tight as ever and his tone is massive. I caught up with him to talk about the record and how he gets that sound. END_OF_DOCUMENT_TOKEN_TO_BE_REPLACED

PRESS RELEASE: Megadeth, Motörhead, and Anthrax – three of the greatest heavy metal bands in the world – will perform at the first annual Motörhead’s Motörboat cruise onboard the Carnival Ecstasyfrom September 22-26, 2014. In addition to these three rock giants, “The Loudest Boat In The World” will also feature performances from Zakk Wylde, Jim Breuer, Danko Jones, Fireball Ministry, Wilson, and some big surprises…more bands to be announced soon.  Motörhead’s Motörboat will sail from Miami, visiting the ports of Key West, Florida andCozumel just off Mexico’s Yucatan Peninsula. While onboard, guests will have a once-in-a-lifetime opportunity to interact with band members and will see unforgettable performances on various stages throughout the ship.  END_OF_DOCUMENT_TOKEN_TO_BE_REPLACED

The latest in the Metal Masters clinic series has been announced, with a huge line-up of legends from some of the biggest names in thrash and prog metal. And although it occurs during NAMM Week (and NAMM is industry-only which presents certain challenges), Metal Masters is open to everyone. It’s at the House Of Blues in Anaheim, California, in Downtown Disney and right near the Anaheim Convention Centre where NAMM is held. So if you’re heading there for NAMM anyway, this seems like a great way to kick off the week. And if you’re not NAMMing but you’re in California, go go go go go! And if you’re not gonna be there, it’ll be streamed online! Here’s the press release.  END_OF_DOCUMENT_TOKEN_TO_BE_REPLACED

Wow, didn’t see this one coming. Guitarist Rob Caggiano has left Anthrax after two albums and a gazillion tours. Fans on Twitter are already calling for former lead guitarist Dan Spitz to return to the band. And Dan tweeted this a couple of hours ago:

“Now playing….
Caught In A Mosh….
With the lead break (I wrote) note for note perfectly executed. Anybody want to listen to it”

But back to Rob. He says:

“I’m extremely proud of my time in Anthrax. Actually, that’s an understatement! We accomplished so many great things together over the years and I shared some of the best times of my life with these guys. As a band, we also weathered quite a few storms along the way. It’s been a wild ride (to say the least) from Day One and I wouldn’t change one single thing about the last 12 years. This is an extremely difficult and emotional decision for me to make but my heart is just steering me in a different direction right now. END_OF_DOCUMENT_TOKEN_TO_BE_REPLACED

Have you seen what MONO is up to? They offer a range of environmentally, zoologically and aesthetically friendly cases for we guitarists, as well as plenty of other items too – wallets, laptop sleeves, iPad sleeves, backpacks, pedalboard cases, DJ storage stuff… The company has a clear and identifiable design style  too, which gives their products a lot of character. Y’know how products by companies like Apple and Fender always feel ‘Apple-y’ or ‘Fendery’ yet retain their individuality as an item? That. I had a chat with MONO founder Daniel Kushner about the company’s philosophy, product offering and jam-friendly company culture.

How did Mono begin?

MONO was born out of 3 colliding factors: 1. My desire to build a design-driven company, 2. My desire to reconnect with my musical side, and 3. My frustration at the time with the state of soft goods in the music industry. I felt I could really make a difference in the industry designing pro level products for my favorite activity – going to play music. “Go Play” became my mantra, and continues to be our mantra!

END_OF_DOCUMENT_TOKEN_TO_BE_REPLACED

Pearl Aday and her band play kickass high-energy, slightly dark-tinged rock. It’s no surprise that the band rocks so hard. In addition to Pearl’s impressive resume and family history (for instance, she’s toured as a backing vocalist for Motley Crue as well as for her dad Meat Loaf), the band Pearl consists of the members of Mother Superior – who for a while were the new Rollins Band – and her husband Scott Ian of Anthrax. Being surrounded by rock her whole life, Pearl kicks off her debut album – Little Immaculate White Fox – with a raging anthem called Rock Child which immediately shatters any idea that rock is anything but in her blood.

“It’s just a rock song, high energy rock and roll. It’s pretty straight forward,” Pearl says. “The lyrics are about how I guess I am a, y’know, rock child. My dad’s a rock singer, and the lyrics are pretty autobiographical. When I was little my mom worked in a recording studio, and an open guitar place was a really good place for a baby to sleep if you put in a blanket and a pillow. So I actually did sleep in a guitar case. We just felt it was a fun song and a really good opener to kickstart the album.” Pearl could be forgiven for skirting the issue and not writing a song about it, but what would be the point? “I’m not ashamed of it,” she says. “I’m proud of where I come from. It’s part of who I am and what I do, so why not celebrate it?”

END_OF_DOCUMENT_TOKEN_TO_BE_REPLACED 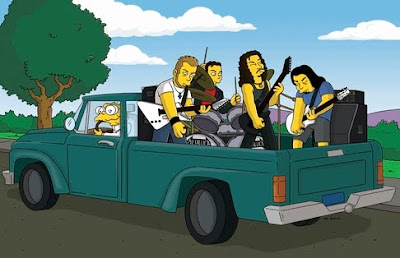 Forgive the netspeak, but… ZOMG! WTF! The rumours are true! Metallica, Megadeth, Slayer and Anthrax are hitting the road together! The mythical Big Four Tour is going to become a reality… at least in the form of several festival appearances in mid 2010.

Metallica, Slayer, Megadeth, and Anthrax . . . the rumors are true!

You’ve been posting and chatting about it for months and we’re here now to confirm it . . . Metallica, Slayer, Megadeth, and Anthrax will all share the same stage for the first time EVER! Look for the four of us at the Sonisphere shows in Warsaw, Poland and Prague, Czech Republic on June 16 and 19, 2010 with a few more of the festival dates still in the works, you can be sure these shows won’t be the only ones.

In the words of Lars: “Who would have thought that more than 25 years after its inception, thrash metal’s big 4 would not only still be around and more popular than ever, but will now play together for the first time…what a mindfuck! Bring it on!”
What more can we say??

So it won’t just be Sonisphere, it will be some other festivals too… could a full tour be in the works after that? We shall see!

CLICK HERE for my September 2009 interview with Dave Mustaine.