I like plugging into a nice clean solid state bass amp as much as the next dude, but there are times when you really need to growl and snarl. That’s where the Eden WTB300V comes in. Eden has revamped their E300T amp into the WTB300V to make look as rockworthy as it sounds. As part of the new design you can see the valves from the front, making the amp look that extra bit evil. There’s also a groovy light-up Eden logo. But you can’t judge an amp on looks alone or we’d all be playing through little portable Pignose combos. So let’s check out the WTB300V’s innards. 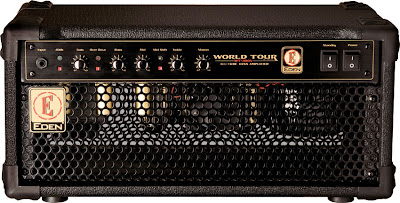 Next to the input is a pad switch which reduces input gain by 10dB. Next there’s a gain control and an Overdrive button. The gain control is active whether you use the Overdrive button or not so you can balance it with your master volume to get the right amount of cleanliness or edge even if you’re using a clean setting. Next we have Bass, Mid and Treble pots with a Mid Shift button between the latter two which operates on the 500Hz and 2.2KHz frequencies. Finally there’s a Master Volume plus power and standby switches. Internally there are six independently biasable Ruby KT-88 output valves cranking out 320W RMS of pure rock power into 4 or 8 Ohms. Around the back we have 1/4” and NL-4 speaker output jacks, DI and tuner outputs, the 4/8 Ohm impedance selector and a footswitch jack. The included footswitch has two buttons, Mute and Overdrive, so even though the WTB300V is a single channel amp, the ability to switch the Overdrive section on or off remotely effectively turns it into a two-channel beast.

I tested the WTB300V with an Ibanez SR5006 Prestige Soundgear 6-string bass with active Bartolini pickups and a Yamaha Attitude bass with passive DiMarzio pickups. I used a Hartke 4X10 cabinet for testing. With the overdrive left off for now, the tone was be nice and even with good separation between the frequencies and good note definition even when blazing out fast passages. Something extra special seems to happen harmonically around the 12th fret which is great news for players who like to climb up there. Some of my favourite sounds occurred somewhere between clean and overdrive, where a softer pick attack resulted in cleaner notes while digging in harder bought out an angry, compressed edge. This was especially evident using slap and pop techniques on the 6-string. Nudging up the gain a little bit and flattening out the 6-string’s EQ brought out some warmth and colour which helped knit together tapped chords and picked arpeggios, really showing off how well-suited this amp would be not only for supportive bass players but also those who take lots of solos. I’d have no hesitation using it for a fusion gig, then packing it into the car and letting rip at a metal club. The distortion isn’t quite enough distortion for full-on extreme metal so we tried it out with a Big Muff fuzz to see how it handles ultra high gain and it sounded like doom on wheels. In a good way. We also ran a chorus through the effect loop and lowered the gain a little for a very convincing New Order tone. Switching to the Yamaha and reaching for a pick brought out those clicky, driving David Ellefson Megadeth tones, while going pickles and cranking the overdrive unleashed a Billy Sheehan-like firestorm. Also great for Tool tones if you bring the mids down a bit and crank the treble.

This is a great amp for those who need earthier textures, whether for rock, funk, jazz, blues, soul, some metal genres… in fact I can’t really think of a genre that wouldn’t benefit from having the low end coming out of the WTB300V if you’re after a warmer, smoother tone than that provided by solid state rigs.