The Pearly Gates is one of my favourite Seymour Duncan pickups. Designed with Billy Gibbons, its voice is vintage and sweet but with a slight edge to it. (Joe Satriani liked this pickup so much that he had them installed in one of his chrome Ibanez JS signature guitars and named it ‘Pearly’ – unfortunately that guitar was stolen in 2002). Many years ago, Billy asked Seymour if a pickup could work under water. They decided to try it by submerging a very early Pearly Gates pickup into a pickle jar and testing it to see if it still had a signal. It still worked – so they decided to put a lid on the jar and test it again some other time. That was almost 30 years ago. It lives in Seymour’s office and he and Billy still take the jar out every now and then to test the pickup. It looks pretty damn gnarly by now, covered in gross brown stuff, but it still works perfectly. Below are some pics of MJ from the Seymour Duncan Custom Shop testing the pickup a couple of weeks ago when I was at Seymour Duncan HQ.  END_OF_DOCUMENT_TOKEN_TO_BE_REPLACED

TV Jones, Inc was formed 1993 by guitarist and luthier Thomas V. Jones in Whittier, California. Now based out of Poulsbo, Washington, the company is known for their brilliant recreations of classic Gretsch Filter’Tron pickups in the form of the TV Classic, as well as more modern variations on the theme, like the TV Classic Plus, Magna’Tron, Power’Tron, Power’Tron Plus (developed with Billy Gibbons of ZZ Top) and Super’Tron. They do plenty more too: for the full range check out TVjones.com

d you get started? Did you follow the classic ‘accidentally destroy a lot of cheap guitars as a kid’ route, or more traditional luthiery?

As a kid I took my guitars apart out of curiosity. Later on I did many repairs and even attempted to build a double neck electric guitar (6 string and mandolin). Around 1990 I decided to become more serious about guitar repair and construction, so I got a job at a violin shop called The World of Strings in Long Beach, California. I worked in the guitar department for almost three years, and learned to repair and construct stringed instruments based on orchestral instruments. So I got started as a luthier.

What is it about the FilterTron tone that is so magic for you?

The growl, clarity in the bass, and compression –– it is magical.

I imagine you must have disassembled, analysed and reassembled quite a few vintage pickups over the years – what have you learned from this process? Was there as much variation between FilterTrons as there was between classic-era PAFs?

END_OF_DOCUMENT_TOKEN_TO_BE_REPLACED 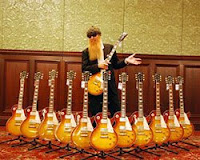 Okay, below is a visual approximation of what just happened to my face when I visited gibson.com:

O_o
>.<
o_O
Then I spat some coffee and got on the phone to Vegas and told them to put it all on red for me cos somehow I’ve now gotta come up with $25,882 quick.
The Billy Gibbons ‘Pearly Gates’ Les Paul Standard

It’s finally here, and it’s bad to the bone. And now you can own it. Billy Gibbons’ favorite axe has always been his beloved Pearly Gates – a rare 1959 Gibson Les Paul Standard with legendary angelic qualities. It has appeared on every track of every ZZ Top album to date, and sings with a “God-like voice” unlike any other guitar. And now, the master craftsmen at Gibson Custom have recreated it in excruciating detail – right down to the last scratch and ding. Gibbons’ legendary Pearly Gates – a rare 1959 Gibson Les Paul Standard – is like no other guitar in the world, and now you can own a painstaking replica of this sacred instrument. Admit it; this is the artist model you’ve been waiting for. Now it’s here, so don’t wait any longer. There are three different models for you to choose from – all in very limited quantities. They won’t last long, so act now. The Billy Gibbons ‘Pearly Gates’ Les Paul Standard is now available. Find your nearest authorized Gibson Custom dealer and check it out.

The Billy Gibbons ‘Pearly Gates’ Les Paul Standard will be produced in a very limited quantity of only 350 guitars – 250 will receive Gibson Custom’s patented V.O.S. finish, 50 will be aged to look exactly like the original Pearly Gates, and another 50 will aged and personally signed and played by Gibbons himself. We know … try and relax … take a deep breath. And remember, we’re not responsible for what happens when you actually play one. 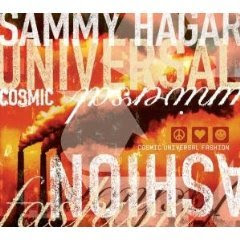 My first ever Van Halen album was For Unlawful Carnal Knowledge (I think I bought it on cassette with my birthday money when I turned 13) and I thought Sammy Hagar was the coolest dude alive – well, after Steve Vai and Eddie Van Halen, anyway.

My opinion of Sammy was elevated further by a kickass rendition of the song ‘High Hopes’ on the Late Show with David Letterman in about 2004, where Sammy chugged out a chunky riff and let fly on a blazing guitar solo on an Ernie Ball/Music Man Edward Van Halen signature guitar.

Sammy’s new album, ‘Cosmic Universal Fashion,’ is unique in his discography because it wasn’t written and recorded from start to end as an album: instead it comprises a bunch of disparate tracks written and recorded in a variety of different settings over a number of years for various projects. Yet there’s a unity to the tracks which helps them sit together in the same collection even though the moods vary wildly.

‘Cosmic Universal Fashion’ is not immune from moments of guitar brilliance. In fact the CD opens with a wild, high-speed guitar lick, and with axemen including Journey’s Neal Schon, ZZ Top’s Billy Gibbons, and the Wabos’ Vic Johnson, there’s no shortage of guitar fire on this one. Tracks two and three, in particular will be especially appealing to guitar geeks like me. These two songs, “Psycho Vertigo” and “Peephole,” are the only recordings of Sammy’s short-lived supergroup, Planet Us, which included Schon, Van Halen bass player Michael Anthony and drummer Deen Castronovo (Joe Satriani was later added to the line-up, but aside from a Rockline performance nothing was ever recorded with him). These songs are dark, powerful, moody and atmospheric, and are not a million miles removed from Sammy and Mike’s work on Van Halen’s ‘Balance’ album.

The album’s first single and title track is a collaboration with a young Iraqi musician, Steven Lost, and the song’s theme and music video (see below) both echo Van Halen’s 1991 single, ‘Right Now,’ while updating the theme to the present day. The music couldn’t be any more different than the Van Halen track though, with heavy, semi-industrial drums, creppy synths and huge guitar chords.

‘Loud’ is a straightforward, top-down, foot-to-the-floor rocker with funny lyrics and a guitar solo straight out of big 70s rock, and ‘When The Sun Don’t Shine’ has country elements and a sunny, summer feel which remind me of Sammy’s ‘Livin’ It Up’ album. ‘24365’ has a tight funk-metal guitar riff which reminds me of Extreme in their ‘III Sides To Every Story’ era, and ‘I’m On A Roll’ could fit quite neatly if added between ‘Good Enough’ and ‘Why Can’t This Be Love?’ on Van Halen’s ‘5150’ album.

There are a few misfires on the CD – Sammy’s cover of the Beastie Boys’ ‘(You Gotta) Fight For Your Right (To Party)’ might be a fun track in a live setting, but it doesn’t really work here and Sammy seems to strain a little bit with the vocals. And ‘Switch On The Light’ has some cool grooves, some tasty Billy Gibbons guitar and a bold, progressive chorus, but it kinda loses its way a bit. But for the most part, there’s a good balance of ‘Party Sammy’ and ‘Serious Sammy’ here, and the opportunity to hear the two Planet Us songs is a very welcome surprise which, combined with the strength of ‘Loud,’ ‘24365’ and ‘I’m On A Roll,’ makes the album well worth checking out.

Holy Cow was released in Japan on October 22, but it’s not yet showing up on the Amazon.com release schedule, so I’m not sure when it’ll see a wider release.
In the meantime you can pick it up from CDJapan here and you can hear samples of each song here.

1. In A Week Or Two (I’ll Give It Back To You)
2. Dynamic Exhilarator
3. A Lit’l Bit’l Do It To ‘Ya Ev’ry Time
4. A Bloodless Casualty
5. Make It To Another Day (I Keep Rolling On My Way)
6. Another Broken Promise
7. Just Another Humanoid
8. Turning Point
9. Two People Can Keep A Secret (If One Of Them Is Dead)
10. Theme From An Imaginary Sci Fi
11. Cell Towers
12. Swimming Underwater