Steve Vai and Carvin recently announced a second generation Legacy amp, but today I’m looking at the original Legacy, which comes in two configurations, the VL100 head and the VL212 combo. Each version has the same layout – two channels (clean and lead), separate volume, middle, bass and presence controls for each channel, master reverb, switchable 50 or 100 watt output (a definite plus, as thing thing’s volume level is a little on the extreme side), cabinet-voiced line out, effects loop, five 12AX7A tubes, and a bias switch to choose between the supplied EL34 output tubes or, if you prefer to tailor your tone, 5881 or 6L6GC.

There are three matching speaker cabinets to choose from, the C412T 4X12 angled top and C412B straight bottom boxes and the C212E 2X12 extension cab, each loaded with Celestion Vintage 30 60 watt speakers at Mr Vai’s request. Early production models featured 75 watt Celestions but when Vai changed them in his personal cabs, Carvin was quick to adapt the production models to match.

THE AUDIENCE IS LISTENING
I reviewed the VL100 head, testing it with an Ibanez Jem 7VWH, Vai’s mainstay white workhorse. The Legacy’s clean channel sounds confident and loud, yet with enough dynamic sensitivity to cover everything from twangy country to warm jazz. Of course anyone who plugs a Jem into an amp designed by Vai is probably going to do what I did and launch into “Sisters.” While that track was recorded direct, it says a lot about what Vai looks for in a clean sound, and it’s here in abundance.

The Legacy’s lead channel is darker than its clean-toned buddy. At lower gain settings, vintage tones are within reach – think classic Led Zep or early Sabbath. Gradually nudging the gain up adds further harmonic complexity, until you get just past 6 when the ‘Vai hidden feature’ kicks in, signalling a hefty jump in gain after which the sound gets more and more saturated. The idea behind this is that if you keep the gain around 8, you can use the guitar’s volume knob to bring the gain back down to below-6 levels for rhythm work. Rolling the guitar volume back to about half and switching to single coils cleans up the tone significantly, and even minute changes to picking and fretting techniques are emphasised by the amp’s overall sensitivity and responsiveness.

Back up at full gain, the Legacy is extremely responsive – it’s one of those amps that gives back whatever you put in, and seems to emphasise whatever you do, whether it’s good or bad, so you’d better have your chops together if you want to go up against it. Legato techniques seem to bring out an almost wah-like quality, while complex chords sound huge and defined. Giving in to the temptation to play some Vai licks, I was able to identify a few touchstone tones, like those from “Fever Dream,” “K’m-Pee-Du-Wee,” “Giant Balls of Gold,” and pretty much everything from the “Live At The Astoria” DVD.

Though the Legacy sounds great on its own, it also sinks its teeth into effects like Homer Simpson scarfing shrimp at an all-you-can-eat seafood buffet. I plugged in my Boss GT8 using the ‘four cable method,’ which allows you to run effects like wah and overdrive before the amp’s preamp as well delays, reverbs or whatever else you choose in the effects loop. Delays and reverbs sounded natural and clear, while wahs and phasers sounded chewy and lively. But harmonizer and Whammy Pedal effects seemed to come into their own with the Legacy, with the dark, thick nature of the amp’s tone doing away with the digital artifacts usually imposed by such effects. 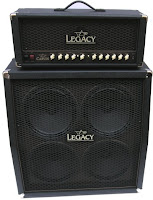 I put the Legacy through its paces at a trio jam. As the only guitarist I need a tone which can cover a lot of sonic ground, and the Legacy fulfilled that requirement admirably. Make no mistake, this thing is LOUD. With the volume on 2, it was powerful enough to cut through the band with ease. Beyond that, hearing protection is a must. At higher volumes the sponginess of the Legacy’s saturated sound is complemented by a more solid attack and more lush harmonics, and low B seven string excursions are clear and punchy. But the biggest surprise was just how much the Legacy loved my custom Telecaster with Seymour Duncan Quarter Pounder single coils. The guitar sounded thick and chunky, no mean feat for a Tele, and even minor adjustments to phrasing produced drastic changes in tone.
CLICK HERE to hear Steve Vai demonstrate the Legacy.

LEGACY-ING IS LEGA-BELIEVING
If you’re after a high gain metal amp, the Legacy may not be for you. It’s more suited to lead playing, and open, round, dark tones rather than scooped-mid, ultra-distorted mega meltdowns. And despite what you may think if you’re more familiar with Vai’s “Passion & Warfare” album of 1990 than anything that’s come along since, the Legacy doesn’t rely on nor demand effects to get the most out of it. It sounds best in its natural, unadorned state, where it takes whatever you throw into it and spits it back out, enhanced with extreme volume and harmonic sophistication.

CLICK HERE to buy the Legacy direct from Carvin.

Just spotted this on Blabbermouth.net… Steve Vai’s press conference launching the Legacy II amp for Carvin at NAMM. In the video, Steve talks about the design concept behind the amp, including the new added channel, which is a boost for the clean channel. Unfortunately he doesn’t actually play through the amp in the video.

The Legacy II will be released at the end of February.