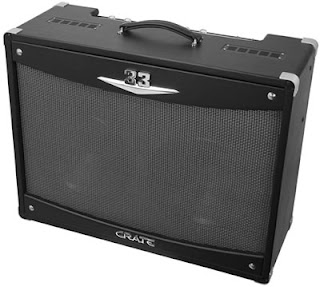 There once was a time when Crate amps were considered, to loosely quote Billy Corgan, “The amp your mom bought you when she was too cheap to buy you a real amp.” Those days are long, long gone, with a long list of high profile endorsers including ZZ Top’s Billy Gibbons, the late great Bo Diddley, Living Colour’s Vernon Reid, Sammy Hagar, Ministry’s Mike Scaccia and Al Jourgenson, and pedal steel virtuoso Robert Randolph. My first real amp was a Crate GT-200H, a very cool hybrid head with 2 valve and 2 solid state channels. Yngwie Malmsteen used to advertise the combo version as his practice amp, so there ya go.

The V33 is a world away from Crate’s more metal-toned offerings. To a certain degree, the V33 might remind some players of another well-known amp with an association to the letter ‘V’. It’s a 33 watt, all valve Class A amp with four 12AX7 preamp valves. One 12AX7 greets the guitar signal pretty much right there at the input jack; two operate on the clean channel, and another is added when you select the overdrive channel. There are two more 12AX7s following the spring reverb and effects loop. The V33 has two 12” speakers fed by a power section running on four EL84 cathode biased output valves.

The EQ section is shared by both the clean and overdrive channels. There’s a Boost button to engage a 10dB boost at 900Hz for adding more guts to the midrange, and a presence button which provides some extra sparkle.

The manual deserves a lot of praise for containing a very detailed article about valves – what they are, how they work, and how to care for them. It’s a great read, and the writer resists the urge to get too techy, without dumbing things down either.

PUT DOWN THE MANUAL, GEEK BOY

Time to put down the manual and crank this baby up. The clean channel has a great sparkle, giving way to a satisfyingly hot chunk when cranked up. The gain level never quite makes it to distortion territory even when pushed. Instead there’s a chimey, almost acoustic character which is ideal for blues, jazz, indie and country styles – especially with a slapback delay in the effect loop. The overdrive channel has a warm, slightly mushy compression which seems to love single coil pickups for a bit of Hendrix growl. Humbuckers give the amp a more fusion-ish tone. The gain never quite gets out of control, but this is an amp for more refined players who need to hear exotic intervals and careful note articulation, rather than a box of doom for metal monsters.

This amp is a great option for those who dwell on the lighter side of rock, the heavier side of jazz, right smack bang in the middle of the blues, or country players who need some meat for solos but require a rhythm channel that can take a spankin’ from a Telecaster. 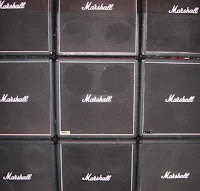 Here’s a simple glossary of amp terms. I find it’s handy to keep this kinda stuff as a reference when writing reviews, and I add to it from time to time.

Balanced connector: A 3-conductor connector which carries a signal over 3 wires, commonly used in microphones but also in some guitar and bass amp recording outputs. Also called XLR or Cannon.

Bright switch: Increases the treble of an amp, either by adding extra treble or by shifting the range of frequencies the amp’s treble control operates in. Can have a similar effect to a Presence control, but is not variable.

Cascading: Wiring preamp stages in series for more gain. Common in Crate amps, where the Sequential Cascading Gain feature makes each potentiometer affects the one after it for greater tonal control.

Channel switching: Changing from one amp channel to another, achieved either by a switch on the amp itself, a foot switch, or MIDI. Some units allow you to combine effect units with particular amp channels to be recalled at the tap of a foot.

Class A: Circuit in which the device is always conducting electricity to some extent, drawing power even if there is no signal at all.

Class B: Circuit which amplifies only half of the input wave cycle. Circuit switches off the amplifying element half the time for greater efficiency, but with a large amount of distortion.

Class A/B: Circuit in which the signal mostly stays in the Class A region, but with efficiency benefits of Class B, without much of the associated crossover distortion.

Combo: An amplifier which contains its own speaker, instead of requiring a separate speaker box.

Compression: Evens out a signal’s dynamic range by capping the volume level while simultaneously increasing the volume of quiet signals. Can be achieved with a pedal, built into an amp, or applied in the recording studio. Valve amps also offer a type of compression when cranked.

Crossover distortion: Distortion created when the top and bottom devices in a push-pull amplifier circuit are amplified at slightly different times.

dB (decibel): A measure of volume.

Depth (1): An amp control which increases the bass frequency response. More commonly found on modern amps built for metal, or for baritone or 7 string guitars.

Depth (2): A control for setting the character of effects such as chorus, phaser or flanger, which may be built into an amp.

Distortion: Technically, amplifying a signal until it’s louder than the circuit can take. Originally a problem which engineers tried to design out of amps, but now appreciated as the greatest thing ever invented.

Dynamic range: The relationship between the minimum and maximum signal level. Can describe how an amp responds to hard and soft pick attack, volume swells, etc.

Effect chain: A series of sound effect devices wired one after the other.

Effect loop (Series): A point in an amplifier’s circuit where a single effect or an effect chain can be inserted into the signal. This usually occurs after the preamp but before the power amp, allowing the effects to add ambience or colour to the main guitar tone.

EQ: In a nutshell, tone controls (at least in the context of amps). This can refer to knobs or sliders.

Extension speaker: A speaker cabinet which can be added to an amplifier. Technically it can refer to any cabinet plugged into an amp, but is more commonly used to refer to adding an extra speaker cabinet to a combo amp.

Jack: The hole a plug plugs into. Or some guy who jumps out of a box.

Feedback: That squealy sound when a microphone or guitar pickup re-processes the signal from a speaker broadcasting it. Some feedback is ugly and people spend thousands of dollars trying to eliminate it from acoustic guitars and PA systems. Other feedback is glorious and controllable and should be encouraged. Check out the intro to Joe Satriani’s “Flying In A Blue Dream” for controlled feedback in a musical context.

FET switching: A FET circuit which is used to turn on effects in amps or pedals, or to switch amp channels.

Footswitch (momentary): A different kind of switch which can work in the same way as a latching switch, or which can be tapped multiple times to set a delay or modulation rate, or to kick in effects only when the pedal is being pressed down.

Gain: Another term that has many meanings, but in this case usually means ‘amount of distortion.’

Gain boost: Usually an extra gain stage that can be turned on and off with a footswitch, especially for solos.

Headroom: The difference between peak tone and peak volume. For instance, ‘Clean headroom’ refers to how loud a clean sound can get before it distorts.

Impedance: Measured in ohms, the total opposition to the flow of alternating current in a circuit.

Master volume: A global volume control for setting the overall volume of an amp. There may be individual channel volumes too for setting the ratio between rhythm volume and solo volume.

Ohm: The unit used to measure electrical resistance or impedance.

Power amp: The part of an amp which drives the speakers. Can be part of a head or combo, or a separate unit for use in a rack system.

Power amp in: Can be another name for an effect loop return. Can allow a head or combo’s power amp to be driven by an external preamp.

Power attenuator: A device for absorbing some of the speaker load so an amp can be cranked for best tone without being too loud.

Preamp: The part of an amp which contains the gain control and tone controls. The main voice of the amp.

Presence: A control which adds additional treble to the circuit.

Solid state: In this context, refers to diodes and transistors instead of valves.

Wattage: How much power an amp handles.