Congratulations to Kiko Loureiro​ on officially joining Megadeth! Dave Mustaine officially broke the news a few hours ago, saying: “I first met Kiko around 8 years ago for a cover shoot for Burrn! magazine. I had no idea who he was, other than the fact he was tremendously talented and that the staff from Burrn! held him in high regard. Since then I’ve come to see what a guitar virtuoso he is, and I’m deeply encouraged by his depth and talent. Very few Megadeth alumni have had the same feel and ability as Kiko. As Frank Sinatra says, “the best is yet to come!”

If you’ve never heard Kiko play, check this out: END_OF_DOCUMENT_TOKEN_TO_BE_REPLACED

It’s a shame that news of this leaked early because it’s been fun following the official Megadeth site’s drip-feeding of information about the band’s 15th album. They’ve just confirmed – via a memory game on their website where you had to match images of Megadeth album covers, pics of adorable lambs, and images of various film depictions of God (George Burns, Morgan Freeman and Alanis Morrissette). A press release has also been sent out to media and you can read it below. So who will the guitarist be? There are rumours about that too but let’s just wait and see. I’m quite enjoying how the band is choosing to put the information out there.  END_OF_DOCUMENT_TOKEN_TO_BE_REPLACED

While at NAMM I had a chat with Mr. Dave Mustaine for Seymour Duncan. I’ve interviewed Dave several times before but always over the phone, so it was really great to finally do a face-to-face chat. Enjoy!

Despite earlier (as in, a couple of hours ago) reports that Megadeth had pulled out of the Soundwave festival, Dave Mustaine now seems to be open to remaining on the bill Dave has just posted on Facebook: “All I asked for was an apology for blaming me for something I didn’t do. I am still willing to play, but the promoter would rather not apologize and prefers to say I asked him to lie, which I didn’t. Am I the only one that sees how easy it is to fix this? The AJ Maddah that I know is a wise and caring man, and I don’t know what has happened to my old friend. My bags are packed Aussie fans.” Below is the earlier report: END_OF_DOCUMENT_TOKEN_TO_BE_REPLACED

It’s safe to say that metal as we know it simply wouldn’t be the same without Megadeth. The other ‘big four of trash’ bands contributed certain elements to the form – Anthrax brought the humour, Slayer brought the evil and Metallica brought the gruff manliness. But Megadeth contributed intelligence, social awareness and instrumental virtuosity in a consistent and incredibly assured way. Megadeth’s lineups have changed throughout the years but the one constant is Dave Mustaine. In many ways he is Megadeth – he’s the band’s songwriting anchor, and his rhythm guitar style defines the whole band’s approach. Megadeth are returning to Australia for Soundwave 2014, and their performance is sure to be a highlight of the festival. How could it not, with classics such as “Holy Wars …The Punishment Due,” “Hangar 18” and “Symphony Of Destruction” to draw from, as well as material from latest album Super Collider, which sees the band returning to the more melodic vein previously explored in albums like Youthanasia and Cryptic Writings?  END_OF_DOCUMENT_TOKEN_TO_BE_REPLACED

Burbank, California – Heavy metal legend Dave Mustaine has switched to Cleartone Monster strings; and the California-based guitar string manufacturer will release a signature set of .010-to-.052 gauge strings that pay tribute to the Megadeth founder and front man. According to Mustaine, “The first time I played Cleartone Strings, I noticed a ton more volume. They were bright, felt solid and durable, but really loud.” That’s because all Cleartone strings, including the heavy metal-centric Monster series, employ VolumeBOOST™. According to an independent sound lab, VolumeBOOST gives Cleartone strings up to 36% more loudness compared to uncoated strings. END_OF_DOCUMENT_TOKEN_TO_BE_REPLACED

Th1rt3en is Chris Broderick’s second album in one of the most coveted guitar jobs in the world: Dave Mustaine’s sparring partner in Megadeth. Broderick has some pretty big shoes to fill (Marty Friedman, Chris Poland, Glen Drover), but that’s old news: he brings his own style, feel and technique to the band in a way that they hadn’t really had since the early days of Friedman’s reign in the 90s. Th1rt3en finds Broderick once again shredding with the best of them and weaving in and out of classically Megadeth riffage with confidence and ease. I caught up with Broderick to talk Th1rt3en and, of course, guitar.

Hi, is this Peter?

Yes it is. Nice to meet you again! I met you a couple of years ago NAMM.

Oh did you really? Where at? What booth?

And now you’re with Jackson. How’s your new signature guitar working out for you?

It’s awesome! Dare I say, it’s perfect, for me personally. Because you have to understand, when I approached Jackson they were the only ones that never said no. They said “Yeah, we can do that, and we can do that.” So I built that guitar from the ground up thinking about everything I could from the ergonomics to the weight distribution to the placement of the tone knob. Even the placement of the pickups, in addition to the fretboard radius, the stainless steel frets, extremely tall narrow frets. I built that guitar up to be exactly what I’d want, so for me it definitely is the perfect instrument.

Are you using the seven-string version with Megadeth, or is that more of a ‘just because you can’ thing?

No. Well, I’ve always been more of a seven-string player than a six-string player, ever since they were available in the late 80s, early 90s. So for me I’ll always be playing more seven-string stuff. But since Megadeth is more of a traditional thrash band we stick to six strings just to keep those traditional thrash roots more in focus. So whenever I’m onstage with Megadeth it’s always six string, and when I do my own stuff it’s definitely seven-string.

END_OF_DOCUMENT_TOKEN_TO_BE_REPLACED

WOW! Here’s one I didn’t see coming. David Ellefson has rejoined Megadeth. Did you ever think you’d see the day? Crazy! 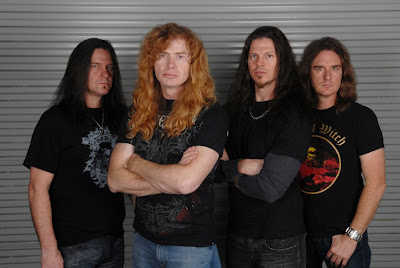 Megadeth founder and frontman Dave Mustaine has announced the return of original bassist David Ellefson (1983-2002) to the iconic multi-platinum group. This reunion is appropriately timed to Megadeth’s upcoming historic month-long Rust In Peace 20th anniversary tour which launches March 1 in Spokane, WA. At these incredibly special shows, Megadeth will play their landmark, genre-defining 1990 album Rust In Peace in its entirety, in addition to other Megadeth favorites.

“This shows the power of brotherly love and forgiveness,” Mustaine says. “David Ellefson belongs in Megadeth. Next we are going to show you the power of getting your asses kicked…HARD!”

David Ellefson concurs: “This is a huge moment for all of us, band and fans alike. It is a great celebration of the music from one of the biggest landmark albums of our career.”

Ellefson will join Mustaine and Megadeth band members Shawn Drover (drums) and Chris Broderick (guitar) on tour in support of the group’s current CD Endgame, which has received some of the highest critical accolades of the band’s career.

“We’d like to thank James LoMenzo for several years of loyal service on the bass, and wish him the very best,” Mustaine adds.