The mighty DragonForce have always brought the epic energy, triumphant power-metal riffage, anthemic choruses and intense shred to their work, but what makes their new album Maximum Overload stand out a little from the rest of their catalog is their willingness to step outside of their established sound just far enough to keep it fresh. Vocalist Marc Hudson has well and truly settled in now (he joined prior to the recording of previous album The Power Within, and Trivium’s Matt Heafy contributes his vocal power to three tracks as well. And for the first time DragonForce have worked with an outside producer, Jens Bogren, who has also produced, mixed or mastered the likes of Soilwork, Symphony X, Pain of Salvation, James LaBrie, Devin Townsend. Throw it all together and you have Dragonforce’s biggest-sounding album yet. END_OF_DOCUMENT_TOKEN_TO_BE_REPLACED

It’s no secret that ESP has been planning to hugely revamp their line in 2014, with the roll-out of the new E-II brand, new signature models and other fun stuff. They’ve just dropped a whole bunch of new models onto their website for us to drool over ahead of NAMM, and many of them sport some pretty damn tasty Seymour Duncan pickups, like the Mystique FR with a Custom 5 in the bridge position and ’59 at the neck. But some of the biggest news is that ESP is opening its own USA factory this year! It’s in North Hollywood, and here’s what ESP President Matt Masciandaro has to say about it: “This is a significant milestone for ESP. For years there has been a demand for a domestic factory, allowing us to create guitars that are 100% made in the USA. Weʼre very excited about the new opportunities for ESP dealers, and new choices for our customers.” END_OF_DOCUMENT_TOKEN_TO_BE_REPLACED

Wow! Didn’t expect these to be announced so soon, but Music Radar has the scoop on several killer new Ibanez models for 2013, including the RG550-XH, effectlively a new version of the RG2011SC, the 30-fret beast released a few NAMMs ago (and used in the studio by Dragonforce, according to Herman Li in my April 2012 interview), the new Iron Label series and … a Premium version of the venerable ‘green dot’ Universe 7-string!!! The UV70 features DiMarzio Blaze pickups and the same basic styling as one of the most missed early Universe models. Get the lowdown here.

It’s always tough on fans when a singer leaves a band. Sure, Van Halen did fine with Sammy Hagar, and AC/DC didn’t exactly flounder when Brian Johnson joined, but there’s always that moment of “Oh jeez, will this work?” Post-Lane Warrant, heck, even post-Hagar Van Halen – there’s lots of scope for a misstep. Well the new Dragonforce album, The Power Within, will immediately shut up anyone who expects the band to lose some of its edge following the departure of ZP Theart. About a year after Theart walked, Dragonforce announced they’d enlisted Marc Hudson as their new voice. And what a voice. Dragonforce still sounds like Dragonforce, but even more musical, more powerful and more exciting. For a band who dishes out killer riffs and impossible guitar licks as easily as walking, kicking it up a notch is quite a feat. But The Power Within delivers.

Hi Herman! We haven’t met before but I remember you kicking around on the Jemsite forums back in the day.

It’s been great to see forum regulars like you and James McIlroy (Cradle of Filth) going on to such big things.

Yeah! Actually James gave me the contact with Ibanez to get my deal!

Well, first question: What did the switch to Marc bring to the creative process?

With the switch of singer we definitely turned the whole recording process, the rehearsing, the whole band thing upside down and changed everything around. I think it was going to happen anyway, because after we finished the last album I wanted to really look back at the ten years we’d been doing the band – y’know, how we did it, how we wanted to change things, how we could make it better. So for this album and the recording process, I suppose I can almost say it’s completely different from the last album, the last two albums.

END_OF_DOCUMENT_TOKEN_TO_BE_REPLACED

This video contains clips of Marc in the studio recording demos of new DragonForce work in progress.

Here are some more sweet ESP/LTD models unveiled at MusikMesse. While ESP does a great line of vintage-inspired designs, there’s nothing particularly old school about these new models.

First up are LTD Okkultist and LTD Shadow models for the Guitarists of Dimmu Borgir. 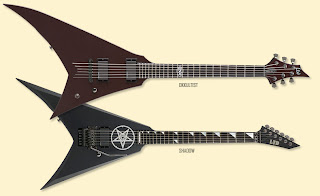 ESP says: Taking the darkness of black metal to profound new depths, the guitarists of Dimmu Borgir join the legendary ranks of ESP artists with their new ESP Signature Series models: Silenoz’s Okkultist and Galder’s Shadow. These guitars scream with metal attitude, equally good at shining in the spotlight or dwelling in the deepest of shadows.

Next is the LTD FL-600 Bass from Frédéric LeClercq of DragonForce.

ESP says: As the thunder that holds down the bottom end of DragonForce, Fred LeClercq is a force to be reckoned with on his own. His innovative bass playing spans the realm from ultra smooth to chainsaw harsh, and his new ESP Signature Series LTD FL-600 bass allows him to combine melody, power, and speed into an unmistakable sound.

Then there’s the monstrous LTD Hex-7 from Nergal of Behemoth, which I wrote about here.

ESP says: If you like your blackened death metal extra dark, there’s no better place to turn than Behemoth. Their founder and frontman Nergal has designed his ESP Signature Series LTD Hex-7 to be about as extreme as a guitar can be. 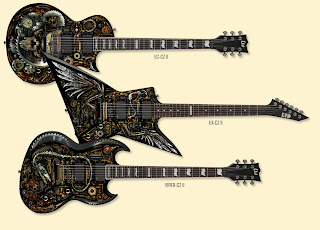 Renowned UK-based artist Mister Sam has once again created the ultimate hybrid of man and machine with his custom artwork on the new limited edition Clockwork Zombie Graphic Series guitars for LTD. The EC-CZII, EX-CZII, and Viper-CZII combine skeletal remains with metal cogs, flywheels, and gears on these sinister and unique instruments.

Kudos to Jon from Guitar Noize for bringing this to my attention via this article.

UK power metal phenomenon Dragonforce has returned with Ultra Beatdown, an intense collection of anthemic, riff-happy, solo-frenzied chaos and symmetry the likes of which haven’t been heard since …well, since their last album of equally awe inspiring metal mayhem. But this time around the band has upped the stakes with freaky new sounds and more involved vocal arrangements. I spoke with keyboard player Vadim Pruzhanov just after the band put the finishing touches to the album, and I was privileged to hear some rough mixes, some of which were yet to have solos added: in their place were hilarious comments from the band warning off potential music pirates. This interview was originally published in Mixdown magazine in August 2008. It’s presented here cos Vadim’s approach may be quite interesting for guitarists as well as keyboard players.

VADIM PRUZHANOV: What kind of magazine is this?

PETER: It’s a musician’s magazine, with lots of stuff about gear.

PETER: Bring it on! I’ve been cranking the new album. It’s pretty intense.

VADIM: We’re pretty pleased with it! It sounds pretty awesome. We finished mastering five days ago and it turned out really cool. It took us 11 months to do this record, and our demos were really rough and really bad. We thought it was going to be a pretty crap album, but it turned out to be the best album so far. There’s such a progression on each album, and this one has the balance right. It has the melody, the catchiest stuff we’ve ever written. Inhuman Rampage was a bit of chaos, with great melody and brutal at the same time, but on this one everything is balanced out. You can have it as the background when you’re having a lovely meal with your girlfriend, you can listen to it and rock out in the car when you’re driving, and headbang to it as you’re driving. You can play air guitar or air keyboards to it. There are much more keyboards on this album, more solos. More variety actually. There’s so much depth on this album. Some influences were taken from tango music. There are some samba and jazzy fusion influences too. And we even did two or three songs mid tempo. But still the majority of the songs are pretty much the same speed, but there’s more variety and better flow.

PETER: You guys have got the speed and the sound, but the energy really comes through too, which is a hard thing to record.

VADIM: If you only try to be fast for the sake of it you’re going to lose out on the melody. On this album, we tried to improve the songwriting aspects. We tried to make the chorus overwhelmingly catchy. That doesn’t mean this album had less work done on it, because this album has more work done on it than anything we’ve ever done. Over the 11 months the songs would evolve and change all the time. It’s pretty good for us because the way we see it, the song remains fresh. I can’t wait for the fans to hear it.

PETER: What went into the keyboard sounds on the album?

VADIM: Imagine 30 keyboard tracks on each song, excluding the effects and other bits I used. I used DJ scratching, I used a Korg KAOSS pad for dynamic effects. I used this thing – I’m really proud of it – it’s called a Theremin, I don’t know if you’ve ever heard of it?

VADIM: I used it to produce all these waily, ghostly noises, and I pretty much used it on every song. On one song, it sounds like a roaring, really whacked out sound. You’ll think it’s a guitar or a human voice, but it’s not human. It’s kind of alien, like an unknown language. The Theremin goes really ballistic. Without being big-headed, I’m just going to try and say this: I’m the first person in the world to use Theremin on a power metal record.

PETER: You’ve gotta get an endorsement! Get your own signature model. You can buy Theremin kits on eBay you have to put together yourself.

VADIM: I might do that, man! I bought mine already made. I’m really crap at putting things together. This is amazing. Two antennas, one for pitch, one for volume, go for it. I put it through the guitar rig. I put it through delays and reverb on the guitar processors, and I also used a talk box, so I could sing and pronounce words. I tried a lot of whacked stuff with it. I put it through a Triton Extreme sampler and messed around with it on my computer. There’s so much stuff. The KAOSS pad was used to much on every track. It’s like a new instrument, a new level, between the Theremin and KAOSS pad.

Ultra Beatdown is in stores now