As a guitarist, I’m always in the pursuit of the “perfect tone”, and I was beginning to get a little tired of how my Marshall DSL401 combo amplifier was lacking low-end authority and high-end air. Long story short, I lugged my amp down to my friends at Eastgate Music and tried a handful of cabinets. After a chat with Marcello and a quick wander 20 metres down the road to the bank-which-is-suspiciously-convenient-in-it’s-location, I became the proud owner of a BadCat 2×12″ cabinet. 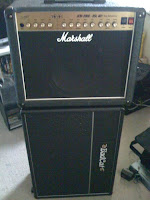 As soon as I got my new toy home, the tiny anthropomorphic dog on my shoulder exclaimed “Ruh-roh, romethings rwrong!” – it seems that I had failed to account for stacking the amp on top of the cabinet. The feet on my DSL were long gone, having disintegrated at a gig sometime, and the handle of the BadCat was an inch tall. The temporary solution I came up with was flipping the cabinet up on it’s side (like you might do with a roadcase in a truck) and plonking the combo on top. Ungraceful, and quite frankly pretty ugly looking. Clearly this wouldn’t do. Scooby agreed.

So I hit The Googles in search of “screw on amplifier feet”, which was a fairly fruitless search until I realized that I should really be searching for rubber door stoppers (which look an awful lot like amplifier feet). A search on the Electronic Bay, or “eBay” as the kids call it nowadays

, brought up bags of 100 door stoppers in the dimensions I needed. I only needed four! A hardware store would have them, but that seemed like conceding defeat. So I continued to agonise over it.

As an aside, I did actually find a company who make screw on rubber feet – Component Force in the UK stock many different sizes and apparently will ship multiple free samples of the same item to anywhere in the world (and then call you at midnight local time from a blocked number to ask if you’ve received them yet). The ones I ordered will be going on my little Vox Pathfinder 15R.

Eventually, I decided that creating rails to screw underneath my amplifier would work. 1×2″ is a very common size of wood, and I probably had some in the garage along with screws to fit. To protect the amplifier, I decided I would glue some felt to the underside. 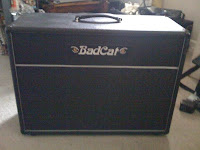 Just a quick note about resale value: If you’re doing this to a vintage amplifier, STOP and think about the value of your amp! Then if it has screw-on feet, go ahead and do it anyway, since if you do this correctly it should be completely reversible. Just make sure you use screws of the same diameter as the ones used for the screw-on feet so you don’t gouge the holes out too large. Or if you do, then superglue toothpicks inside the hole until the original screws hold the original feet back on, just like repairing a strap button.

So what dimensions do the rails need to be? This can be determined with a little bit of patience. Firstly, measure the height of the handle in its flattest position: mine was just under an inch tall. Secondly, measure the depth of the amplifier so you know how long the rails need to be. Mine were 235mm. The third dimension can be anything really – wider rails will be more stable, but as long as they’re as wide as they are tall, anything will do.

My final dimensions were 25 x 50 x 235. Yours will obviously vary. I also measured out the positions of the screw holes: these were 40mm and 220mm from the back edge. The offcut I found in the garage was 40mm wide instead of 50, but this was the least critical dimension so this was fine.

After cutting the wood to size (and sanding the scrappy ends), I proceeded to use a nail punch to mark the starting points for my holes, and then drilled them with a bit large enough for my screws to simply drop most of the way through the holes. I then countersunk the entry of the hole down about 5mm – this way the screws turn freely in the holes (like in real amp feet!), and the screw heads are hidden up inside the rail away from my cabinet. A test fit assured me that yes, this crazy plan would work nicely. 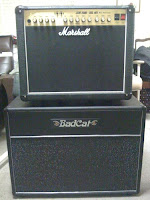 I painted the rails black with a spray can – but probably should have primed the wood first. Seriously, do it – the paint soaks right into the wood and there’s probably some ill effects here that I’m not currently aware of. I ended up having to do about 3 coats to get the rails to look black on the outside. A trip to the craft store and $3.50 later, and I had some adhesive felt which I cut to size with a Stanley knife. A hole punch helped me create holes in the felt where the screwholes were on the rails.

“Walla! A Viola!”, as they say in string circles. My DSL401 was now proudly standing atop BadCat Mountain, after its failed attempt at scaling the peak merely days prior. Total cost was a couple hours of work (including drying time) and about $6 (for the felt and paint). With wood, this project would probably still come in at under $10.

Brendan is an audiovisual technician and also the lead guitarist for melodic heavy rock band Slumberfist who are currently auditioning for bassists in the Melbourne, Australia area.

I just found this tucked away on the website of Melbourne msuic store Eastgate Music. A little while ago to not much fanfare, Eastgate posted about the forthcoming Ibanez RG30AH, a special version of the RG550 being released to celebrate 30 years of Ibanez availablity in Australia, where they are distributed by Australis Music. The guitars will feature a maple fretboard with a special Southern Cross star inlay, original Wizard neck shape and original Edge trem. They will be limited to 60 numbered pieces. Eastgate has pictures of the prototype, which has the old school Ibanez ‘swoosh’ logo, but the final version will have the Prestige logo instead. Recommended retail price is $2,495, and Eastgate will be getting 2, one of which is already sold, according to their website.
These look an awful lot like last year’s RG550 20th anniversary reissue, which were built largely to 1987 specs but with improved neck construction and hotter versions of the original pickups. The 20th annversary version was available in black, desert sun yellow and roadflare red.

It seems more information about this limited edition guitar is very scarce. I’ve only found one other reference to it, from way back in March at the Ibanez Collectors website. If anyone’s seen these popping up in stores already, or if you have one, I’d love to hear about it.
In the interests of full disclosure, I have no association with Eastgate other than playing a bunch of guitars there and geeking out over Ibanez with them. If they happen to stumble across this page, hi guys! Hehe.