It’s about time! Judas Priest’s Richie Faulkner has been flying the flag for the mighty Flying V for years now, and his customs with the oversized pickguard are some of the coolest Gibsons ever. Now there’s an Epiphone version with Floyd Rose, EMG 66 and 57 pickups and that distinctive pickguard.

Okay, that headline might be a bit hyperbolic but what the hell, I’m gonna own it: these are the two coolest Flying Vs ever. Just look at them. Look at them! The Flying V Standard and Flying V Custom take cues from the Les Paul Standard and Les Paul Custom respectively (duh) and they both look fantastic. Or as Gibson says:

Gibson Custom’s Flying V Standard takes its design cues from the the late-’50s “futuristic” design that took the guitar world by surprise. From that starting point, we’ve complemented the now iconic Flying V design with Les Paul-inspired aesthetics including a two-piece, figured-maple top, single-bound body and neck, as well as a lightweight, solid mahogany back tastefully finished in cherry red. The Flying V Standard’s undeniably Gibson tone comes from a matched set of Custom Bucker pickups.

Gibson Custom’s Flying V Custom reflects the kind of “what if” thinking that is the luxury of being the world’s most recognized guitar brand. At its heart, the Flying V Custom is the “futuristic” design of the late ’50s, when it was first released to a world obsessed with space, science and forward thinking. From there, we’ve taken liberties and additional design cues from the stately aesthetics of the original “Black Beauty” Les Paul Custom. What results is a wonderfully balanced guitar with real vintage V tone, dressed to its best for a look that exudes style and distinction.

It’s here at last: the Epiphone Brent Hinds Flying-V Custom! Brent has well and truly earned his right to have a bitchen signature guitar, and he’s combined two of the coolest things ever: Silverburst (the most metal of guitar finishes) and the Flying-V. The guitar also includes Brent’s signature Lace Hammer Claws humbucking pickups. Here’s the press release and some video. END_OF_DOCUMENT_TOKEN_TO_BE_REPLACED

Awesome to see Grace Potter (from Grace Potter and The Nocturnals, obviously) honoured with her own very stylish Gibson Flying V signature model. I like the art deco vibe of the pickguard, although if this was my axe I’d echo that on the truss rod cover as well. Interestingly, the fretboard wood is Chechen (also known as Poisonwood or Caribbean Rosewood).
Here’s some info:
“Crafted from Grade-A tonewoods and loaded with premium hardware and two of the finest contemporary recreations of legendary PAF humbucking pickups, the Grace Potter Signature Flying V is the hippest tone machine to head down the pike in a long time. Its unique look, designed by Grace, includes a hand-sprayed Nocturnal Brown gloss nitrocellulose top finish and satin natural back, sides and neck, and cream-painted Lexan pickguard with custom silkscreened art deco border.
More details here.

Here are a bunch of new 2009 Schecters. Just click the images to see the full-sized versions. I especially like the ATX V-1, and it’s cool to see Seymour Duncan Blackout pickups rapidly finding their way into production guitars. 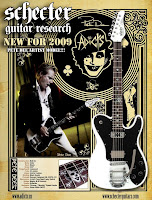 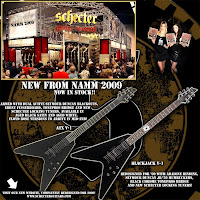