As someone who writes instructional columns (you can read Unleash Your Inner Rock God in Mixdown magazine every month), I’m all for learning from magazines, websites and YouTube. But if that’s your only method of learning, it could take you years to catch up to things you would learn very early on with a teacher. Fretlight, who have long offered innovative illuminated-fretboard guitars for learning purposes, are now bringing teachers right into the equation with their new Certified Teacher Program and Learning Center, which connects students and teachers and lets the student see the teacher’s fretting illuminated on their own guitar. This is a really great idea which I can see helping a lot of players to really optimise their learning time. Here’s the press release: END_OF_DOCUMENT_TOKEN_TO_BE_REPLACED 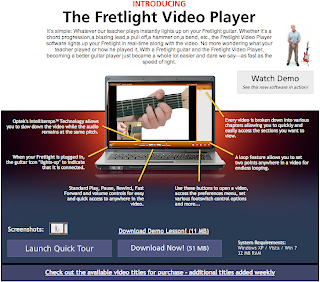 This looks pretty cool: Optek’s Fretlight technology has now integrated with video lessons. I’ve never seen Fretlight stuff here in Australia, but I used to secretly envy it whenever I saw it in guitar magazines. Anyone tried the Fretlight system over the years?

With the Fretlight Video Player, guitar players will now get their very own teacher at their disposal 24 hours a day, 7 days a week. Whatever the teacher plays on his guitar in the video instantly appears in real-time on the student’s Fretlight guitar. Optek’s patented Intellitempo™ technology allows the video instruction to be slowed down by the user without changing the pitch of the audio tracks.

“Most people today are visual learners,” said Rusty Shaffer, President & CEO of Optek. “There are thousands of guitar videos on YouTube and other web sites, not to mention video games like Guitar Hero and Rock Band that people are trying to mimic. However, these videos and the toy instruments that come with the video games, do little to accelerate the learning process because finger placement is the biggest hurdle that individuals face when learning to play guitar. The Fretlight Video Player solves this problem because the teacher on the screen is literally triggering the guitar in your hands. It’s almost as if the teacher is reaching through the computer, grabbing your fingers and placing them in the right place. It’s truly a breakthrough for guitar education.”

Unlike Guitar Hero and Rockband, which utilizes plastic guitar-shaped toys, the Fretlight guitar is a real six-string wooden instrument that is played and sounds like any other electric or acoustic guitar. Optek sells a wide range of Fretlight guitar models at varying price points for beginner, intermediate and advanced level guitar players. With the ability to learn and create music at the individual’s pace, the Fretlight interactive guitar learning system represents a significant advancement in the guitar industry.

For a product demo please go to: http://www.fretlight.com/quicktour/FVP/fvp1.html.

The Fretlight Video Player for Mac will be released in early 2009.

For more information, visit their web site at www.optekmusic.com.