Recently while at the Fender factory and Visitor Center in Corona, California I stumbled upon this little beauty: the very first Fiesta Red Fender guitar ever. It’s a 1957 Jazzmaster prototype, and not only was this the first Fiesta Red guitar, this very guitar was also the first ever Fender to feature a custom colour. And if that doesn’t make it historic enough, Fender’s George Fullerton later added an experimental neck with a round-laminated fretboard made of lacquer-coated black vulcanised fiber – the same stuff used to make pickup bobbins.

Here’s some more info on the guitar from Fender.

We get so used to thinking of guitars as these commodities, mass-produced items that you can see half a dozen of lined up at your local store. But stuff like this particular Jazzmaster, and like visiting the Fender factory in general, reminds me that each one is a unique instrument with tonal properties particular to the individual pieces of wood, the individual trees, that they were made from. And then when you think that before this instrument was made there was no such thing as a Fiesta Red Fender, and that this is the actual first one to ever feature this finish – it all just makes it hit home that little bit harder, the history of this wonderful instrument that we all (if you’re reading this site) use to express ourselves.

The G&L story is quite a familiar one by now. Leo Fender and George Fullerton formed the company in 1980 to carry on the work begun in the 40s by Leo’s former, somewhat successful guitar company. Along the way they created such classic instruments as the Legacy and ASAT, as well as the Rampage model favoured by Alice In Chains’ Jerry Cantrell.

Leo Fender invented the electric bass at Fender, so you would expect any such instrument from either of his namesake companies to be something pretty special. So how does the L-2500 stack up?

SPEC CHECK
The L-2500 is a 5-string bass which mates a swamp ash top to an American tilia back, with a bolt-on maple neck and rosewood or maple fretboard. The frets are a little smaller that I would expect in width, and also in height, but it all adds up for playing comfort and helps to offset any learning curve associated with the soft vintage V-shaped neck profile.

The test bass was finished is a gorgeous honey colour that’s practically edible, but it’s available in a range of finishes. Tuning keys are G&L’s Ultra-Lite design, and they are very solid in both operation and stability. The bridge is G&L’s innovating saddle lock design, with brass saddles for extra tonal punch. Electronics are a pair of G&L humbuckers which feed an active/passive preamp system consisting of 3 pots and 3 mini toggle switches.

CLEAN UP IN AISLE 3 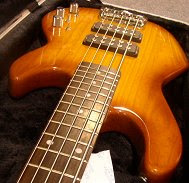 Okay, now that the specs are out of the way… this is one heck of a bass. It feels like it’s a living, breathing thing, and notes sustain practically for days. The natural unplugged tone is good enough and full enough that it you were able to mic it up adequately, it could sit perfectly well within a pro mix – and it only gets better once you plug it in.

In terms of attack the L-2500 responds equally well to pick or fingers, and rolling back the treble makes way for a powerful, resonant John Paul Jones sound. The preamp system includes a 3 way toggle for pickup selection, another for series or parallel operation, and yet another to turn the preamp off, on, or on with a high end EQ boost. It might sound complicated but the only tricky thing about it is figuring out which sound to use, since they’re all great. With the flick of a switch you can go from a meat-and-potatoes rock sound to a hi-fi studio funk sound and back again. It’s exhilarating to have such versatility in a single instrument, and while other companies might try to pack a variety of sounds like this into their basses, what makes the L-2500 special is that each of its voices sounds good enough and ‘real’ enough that each could stand on their own if it was the only sound offered by the bass.

GIMMIEGIMMIEGIMMIE
I would be quite comfortable – in fact ecstatic – to add a bass like this to my recording arsenel and I’m a little sad to have to give it back after the review. The perfect playability means there’s nothing to get in the way of playing exactly what you hear in your head, while the huge range of tones means you can summon any sound you need with a minimum of fuss.