Geoff Tate has just announced the line-up for his version of Queensrÿche in a post on the newly redesigned Queenryche website and it includes some pretty surprising names. Tate says, in part:

“Today is a new day and I am thrilled to announce the new Queensrÿche.

Joining me are: Rudy Sarzo, Bobby Blotzer, Glen Drover, Kelly Gray and Randy Gane.
Together we shall embark on a new musical journey that will be a greater extension of where Queensrÿche has ever been.”

So what do you think? Is there room in the world for two Queensrÿches? The core band – Michael Wilton, Scott Rockenfield and Eddie Jackson – are already working on the next Queensrÿche album with Parker Lundgren and Todd La Torre and have already played gigs under the Queensrÿche name, so this is probably gonna get a bit messy before it all gets resolved in court in November 2013.

Here are a pair of Dean VMNTs with artwork from Rust In Peace and United Abominations, respectively.

Glen’s tenure in Megadeth only lasted for one album and a few tours, but he sure used some cool custom-painted guitars in that time. Here we have a pair of ESPs (Countdown to Extinction and Peace Sells …But Who’s Buying graphics) and a Dean Vendetta with the United Abominations cover. 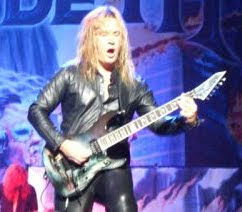 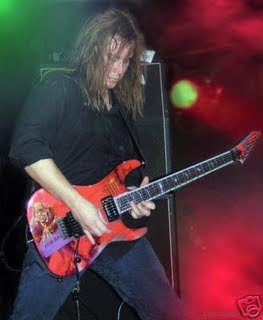 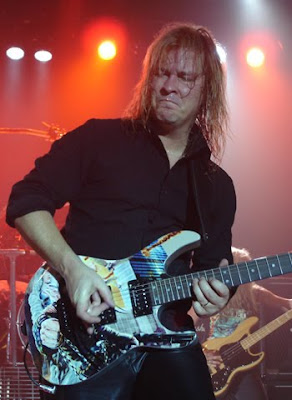 This is an off-the-shelf Ibanez S5470 with a custom hand-painted image taken from the booklet to Megadeth’s new album, Endgame. Chris told the Megadeth forum this one will be re-fitted with DiMarzio pickups. 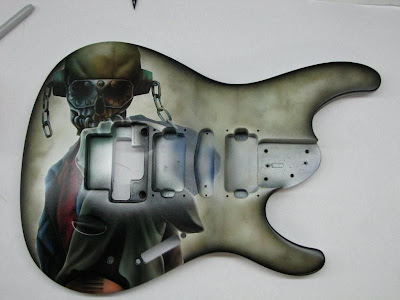 Are there any more I’m missing? Let me know if you’ve seen any others out there! 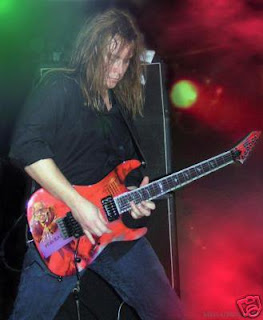 Former Megadeth guitarist Glen Drover is auctioning his famed ‘Peace Sells’ ESP. I saw Glen with Megadeth four times and this axe always got a strong reaction from the crowd (although I liked his ‘Countdown To Extinction’ model even more).

CLICK HERE to see the guitar or place a bid.

This guitar was made for Glen Drover in 2005 and given to him by ESP guitars at the 2005 NAMM convention in California, for the ESP anniversary party. It was also used by Glen for all touring for 2005 and 2006 with Megadeth.

This is an “ESP” version of the LTD Deluxe M1000 and designed to Glen’s specs.

Easily the most popular guitar from Glen Drover’s collection used while in Megadeth.

If Vs are more your style, Dean offers a few graphic Dave Mustaine models, including the low-cost VMNTX with the ‘United Abominations’ album cover, and the new ‘Rust In Peace’ VMNT. 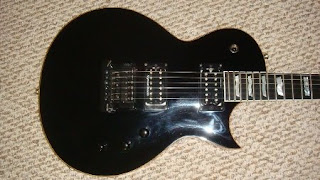 Former Megadeth guitarist Glen Drover is selling his last ESP guitar, a Custom Shop Eclipse, which was given to him near the end of the Blackmail The Universe tour in 2004. The guitar was also used on Gigantour 2006.

The guitar is black with a gold trim and Seymour Duncan pickups. Perhaps most interesting though is that it includes a Kahler 2200 tremolo system.

Serious inquiries can contact Glen’s webmaster at mailto://hallowedapparition@gmail.com. Price is US$1,400. Glen will sign the guitar upon request.

I’m pretty sure this is a different guitar to the one Glen was selling recently, cos that guitar was descirbed as being given to him before Gigantour 2. 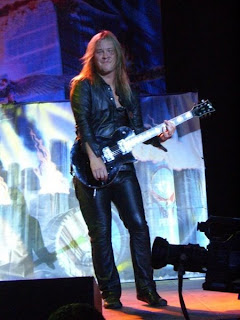 Former Megadeth/King Diamond guitarist Glen Drover is selling one of his custom ESP Eclipse guitars made for him during his Megadeth days. He used the axe on the second Gigantour festival.

This would be a great score for a Megadeth fan, but even if you’re not into them it’s a cool opportunity to own an ESP Custom Shop axe with a bit of history.
Specs are:

* Custom black finish by ESP for Glen Drover before Gigantour 2
* Kahler locking system
* Two Seymour Duncan pickups
* Distortion in neck and 59 in bridge
* One-piece body
* This is a “custom shop” model — not the “standard series.”