The new GTR line is Ormsby’s affordable range built by their partners at World Instruments. For full specifications, and ordering, check out the information page: http://www.ormsbyguitars.com/gtr-production-models.html. Pricing is from $1499 Australian Dollars, with a hardcase and interest free payment plans. ETA February! Pictured above is the TX GTR EATON SPECIAL, in washed black. $1749 AUD. My brother Steve has ordered one of these already and I’m going to beat him up for it. And below is the HypeGTR Multiscale 8, in Magenta ($1750 as shown, Australian Dollars). 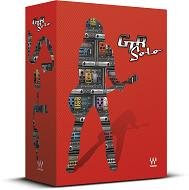 There are a lot of amp sims out there at the moment. Each of them seem to model the same few classic amps, yet each has their own unique pros and cons. Waves offers GTR Solo Pro, which features 10 amps, 13 stomp effects and 10 cabinets. Let’s look at what it has to offer.

GTR Solo has amp models based on classics by Fender, Marshall, VOX and more, as well as a few models created with the assistance and endorsement of Paul Reed Smith. This kind of cross-branding should definitely work in Waves’s favour in getting GTR Solo to stand out in a crowded modelling market. The amp models are called Clean, Sweet, Edgy, Drive, Overdrive, Crunch, Shredder, PRS Scorch and PRS Crush, and SolidState Bass Amp. The stomp boxes don’t claim to be exact reproductions of anything in particular, and as such they’re probably a little more versatile than if Waves tried to model some niche variant of an obscure pedal produced for two months in 1983 out of someone’s garage. The stompers are OverDrive, Distortion, Phaser, Flanger, Chorus, Delay, Wah Wah, Spring, Pitcher, Vibrolo, GateComp, EQ and Volume. There are also 10 cabinet models that are designed with particular emphasis on emulating not just the sound of the speaker itself but also, as Waves says, “the aural sensation of real speakers moving air”. They are 12″ Open Back, 2×12″ Closed Back, 2×12″ Open Back, 4×10″ Open Back, 4×12″ Standard, 4×12″ Vintage, Acme12″ Custom, Bass 8×10″ Pro, Acme 4×12″ Vintage Gibson Skylark and Acme 8″ Open Back Hiwatt.

My favourite models are Drive, for blues-rock and AC/DC moments; PRS Scorch (with the gain control lowered a bit) for singing fusion; and Crunch for chunky rock. The SolidState bass model is also very useful and adaptable. I’ve used it with the EQ effect module to get snappy slap-and-pop sounds, and also on its own with a little ambience for old school treble-reduced 60s psychedelic tones.

I’ve had a lot of fun queuing up my favourite songs and trying to zero in on the guitar tones. Perhaps the most accurate reproductions I’ve hit upon so far are Joe Satriani’s ‘The Mighty Turtle Head’ and Nuno Bettencourt’s ‘Waiting For The Punchline’ sound. The modular nature of the amp and effects means it’s easy to shift different elements around to examine their effect on the tone. For instance, if you’re using a clean tone you can place the delay after the amp for the cleanest, most hi-fi sound, or before it for a little warmth and grit. It also presents a good opportunity to experiment with the placement of pedals such as chorus. I personally prefer my chorus before distortion but most prefer it after. With Waves you can just drag and drop the module to test both methods for a particular song. Try that in the studio without a session-ruining knock to a mic.

One of my favourite applications in GTR Solo is the ability to shift back the perceived distance of the microphone. This is especially handy for getting the same kind of distance ambience you hear on Yngwie Malmsteen’s debut CD, Rising Force. I couldn’t resist dragging out my battered old Strat copy and cranking up a few harmonic minor riffs. Another great asset to this program is the complexity of its off-axis microphone settings, which can add a great out-of-phase honk to the tone – awesome for nailing those bold Mattias Ia Eklundh solo tones, which are very hard to achieve otherwise.

SO WHY GTR SOLO?

So with dozens of amp sims on the market, why should you choose Waves? Well what I like about it most is its ambience and the harmonic complexity of its overdriven sounds. I like all the micing options and the way they add dimension and depth to the guitar within the mix. Waves is running a ‘get GTR Solo free for one year’ promotion where you get 12 months full access to the complete program. By the end of those 12 months, hopefully you’ll have decided it rocks your socks off and you have to pay for the license to keep it.

This is pretty cool. Waves Audio is offering the GTR Solo amp and pedal simulation program as a free download with a 1-year license, and not only do you get amp models from Fender, Marshall, Vox and more, there are also models designed in collaboration with Paul Reed Smith.

This is a pretty bold move by Waves and I can’t wait to download it and crank it up. I use a different program for amp simulation at the moment and I’ve been itching to try out Waves, after hearing great things about it from a sound engineer a little while ago.

I’ll try to do a review with some sound clips some time soon, but I’ll probably be pretty snowed under with NAMM coverage for the next week, so why don’t you head over to waves.com and try it for yourself?