I don’t know who wrote the copy for these Yamaha ads from 1992-93 (which I recently tracked down in some old guitar magazine issues) but they were a marketing genius. These ads are informative and fun, and they lodged themselves in my brain immediately when I saw them as a kid, staying there for a frankly embarrassing number of years since then.

Observe this brilliant piece for the RGZ (Guitar School, September 1992)

Aaaahahahaha. Or what about this, for the super-cool-but-where-is-it-now Weddington (Guitar World, July 1992):

Or, to bring things back around to the shreddier end of the spectrum for a moment, this Pacifica ad.

And the APX acoustic isn’t left out. Behold! (Guitar Player, May 1993)

Hey! Did you see that interview with Aaron Kusterer recently in Guitar Player magazine? Aaron’s CD Language of Emotion is released on December 30 with a launch at BRG Music of Perry & Ames Iowa. Go check it out if you’re in the area! If you preorder the CD from Aaron it’ll ship January 6. Aaron’s an amazing guitarist, a super-nice guy and an awesome ambassador for Buddy Blaze guitars – in fact that’s how I first met him, when I recognised the Blaze logo on his guitar case at an airport. Aaron also gets some amazing tones out of AmpKit.

END_OF_DOCUMENT_TOKEN_TO_BE_REPLACED

Los Angeles, CA – June 13, 2011 – The deadline to enter Guitar Player magazine’s annual Guitar Player’s Guitar Superstar 2011 competition is this Wednesday, June 15th at 11:59 pm.  Entering is simple and free at: www.truefire.com/gpgs2011. The contest is open to guitarists of all styles who are at least 18 years of age, and who live in the domestic U.S. and Canada. The winner will receive a one album recording deal with Guitar Player Records, a newly developed label with MI5 RECORDINGS distributed by EMI!

Five finalists will be selected and flown out to Nashville to compete for the top prize during this summer’s NAMM Show. All finalists will play with a house band of industry pros. All submissions need to be a video of you playing original material, solo or in a band.  No covers, no singing, just your chops in under 6 minutes.  If you’ve got some YouTube videos already done, use one of them.

END_OF_DOCUMENT_TOKEN_TO_BE_REPLACED

Dweezil Zappa was featured on the cover of Guitar Player recently with a unique and utterly gorgeous Paul Reed Smith. Well that killer guitar was no one-off: 50 of these babies will be made. I had a chance to check out the guitar close-up and talk with Dweezil about it and he loves it to bits (he’s also an incredibly nice guy). Can’t blame him! I took these pics at the Paul Reed Smith press conference at NAMM yesterday. Expect more PRS NAMM stories over the coming days as I work through all the info!

Limited to a run of 50 guitars, the new Dweezil Zappa Private Stock semi-hollow model features a unique Custom 24 mandolin shape and is modeled after the guitar Dweezil designed with the Private Stock team.

END_OF_DOCUMENT_TOKEN_TO_BE_REPLACED 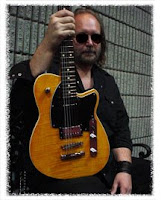 Head on over to the Music Player forums to see Reeves Gabrels’ new tour diary for Guitar Player! The first update is on now, and Reeves will write a diary entry each day of the 10-day, 10-city tour.

15 July 2009 — Greetings. This is the first report from ten shows in ten cities in ten days by Reeves Gabrels and his Imaginary Friends. This summer mini-tour is my first time on the road since recovering from lyme disease, and it’s a different world. GUITAR PLAYER Editor Michael Molenda thought it would be interesting to share what it’s like to tour in the present economic climate and music industry maelstrom. A saner group of people quite possibly wouldn’t bother, but my imaginary friends and I just like playing live too much to do the sensible thing.

And I also found this to be particularly interesting:

I’m playing through a Koch 50-watt combo with one 12-inch speaker and a Mesa/Boogie Rectifier cabinet with two 12-inch speakers. As a spare — in case I should run into any unexpected amplifier problems — I have my trusty Crate Powerblock. I brought three guitars: a soon-to-be-announced Reverend signature model, a Fender Custom Shop Stratocaster, and my Fernandes with a sustainer and a 1967 Telecaster neck. I don’t usually bring three guitars, but I’m treating myself.

CLICK HERE to read more and make sure you check back daily.

Reeves has been a huge influence on the weirder side of my guitar playing, ever since I got into Bowie through the album 1.Outside. You should totally check out his album Rockonica.

QUICK! This week is the last chance for guitarists to apply to Guitar Player’s 2009 Guitar Superstar Competition. Dammit I really wanted to enter this but time got away from me and I haven’t had a chance. GRR!!!

Ten finalists will be chosen by Guitar Player’s editors to face off at the event in September. Guitar Player editor Michael Molenda (one of my personal journalistic heroes) tweeted the other day that he was personally reviewing the applications.

This is the fourth year in a row Guitar Player has found its heroes from the Sonicbids community. Last year, Vicki Genfan was one of the 10 Sonicbids artists Guitar Player selected. She went on to win the competition judged by Joe Satriani, Steve Vai, the Cars’ Elliott Easton, George Lynch and Brendan Small from Metalocalypse (Here was the story in the Wall Street Journal).

Guitarists can get more info and apply here: http://www.sonicbids.com/guitarsuperstar

Guitar Player has opened up submissions for its 2009 Guitar Superstar Competition. Ten finalists will be chosen by Guitar Player’s editors to face off at the event in September.

Here is the press release:

This is the fourth year in a row Guitar Player has found its heroes from the Sonicbids community. Last year, Vicki Genfan was one of the 10 Sonicbids artists Guitar Player selected, and she went on to win the competition judged by Joe Satriani, Steve Vai, the Cars’ Elliott Easton, Dokken’s George Lynch and Brendan Small from Metalocalypse. (Here was the story in the Wall Street Journal)

Guitarists can get more info and apply here.

I’d love to know if any I Heart Guitar readers enter. I’m thinking about doing so myself. 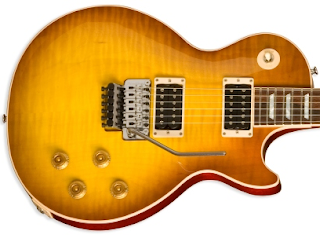 A couple of times over the last few days I’ve happened across photos of Gibson Les Pauls with Floyd Rose bridges (namely, Alex Lifeson in the current issue of Guitar Player, and a shot of one of Eddie Van Halen’s guitars from the 80s), and it’s got me thinking about the new Les Paul Axcess.

The Axcess was released in early December 2008 and it’s has a few playability enhancements compared to the Les Paul Standard, including a thinner body, special neck joint and ribcage contouring and, of couse, the Floyd Rose. There’s also a coil split accessed via a push-pull pot. Chuck a middle humbucker in there, Frampton-style, and I’d be in heaven.