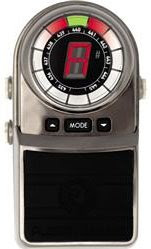 Tuners. They don’t really inspire collector fervour the way crusty old boutique pedals do. You don’t really see vintage models changing hands for thousands of bucks on eBay, and as far as I know there aren’t any coffee table books chronicling their development and evolution. I guess part of the reason for this is that tuners just don’t have that romantic mysticism of a box of potentiometers and transistors cobbled together in a sardine tin in someone’s mother’s basement, sprayed with hammertone paint and sold from the back of a ute. But what the Planet Waves Chromatic Pedal Tuner has to offer is a sturdy tuner in pedal form that feels so solidly built you could confidently use it to hammer in nails or maybe do some light panel beating work.

QUADRAPHONIC SOUND, A WATERBED, AND NOW A STROBE LIGHT
The Planet Waves Chromatic Pedal Tuner (made by J.D’Addario, known for all things stringy) is made of die cast metal and finished in a shiny metallic gloss, the kind of colour that looks either grey, black, silver or brown depending on the lighting conditions. A circular illuminated display sits at the top of the pedal, with a multi-segment, oversized note indicator in the centre. The combined display section is very bright and easy to see on a dark stage – crucial if you care at all about tuning (and why shouldn’t you? Grunge died years ago. Hehe. Sorry).

Below the display, a Mode button and a pair of Up and Down keys allow you to select the display function and calibrate the tuner. The footswitch either mutes the output or removes the tuner from the signal chain completely, depending on which of the two outputs you use (Bypass or regular Output). Planet Waves says the tuner is true bypass, so when you’re not using it it won’t suck the tone and dynamic range out of your pure guitar signal. It’s such a logical inclusion, but one often neglected in tuner designs. What’s the point of making sure you have a perfectly tuned guitar if the tuner itself squishes the sound so much that chords lose their note definition and a bunch of noise is introduced to the signal? However I’d like to point out this comment by I Heart Guitar reader Mario Feegrade (check out Mario’s site here): “I’ve had the CT-04 over a year now and I can tell you it is not “true bypass”. First, Planet Waves claims it is true hard bypass – generally if there is any word between true and bypass, it is probably not true bypass :) Second, there is a 680K resistor in the bypass signal path – true bypass means there cannot be anything connected to the bypass line so this tuner isn’t.”

Another extremely welcome touch is the 9v output. Not only can you choose to run the tuner with a 9v battery or a ‘wall wart’ power adapter, but you can also purchase an additional daisy chain lead which allows to you run other pedals off the power from the tuner, effectively turning it into a power source. Again, it’s a feature seen in some other models but is hardly the norm, and it’s just another cool thing this particular tuner has going for it.

THE PITCH IS BACK
The tuner owes part of its clever design to the strobe tuner concept. This variety of tuner utilises a bank of lights and a rotating disc. The disc spins at a particular speed for each note, while the lights flash at the same frequency as the note you play into it. When you’re out of tune, the light pattern on the disc appears to move around, and when you’re perfectly in tune, the result is a stationary strobe effect. It’s an extremely accurate way of tracking pitch, and it looks pretty cool too. It’s important to point out that Planet Waves Chromatic Pedal Tuner isn’t a strobe tuner itself, but it borrows from this time-tested design in its display method. In Strobe Mode, when the input note is flat the red lights on the circular display chase each other around counter-clockwise. If the note is sharp, they run clockwise. It’s a no-brain method of telling you “the note’s too high, you nut.” As you zero in on the correct pitch, the lights circle the display more and more slowly until you hit the target note, then they stop and you’re in tune and ready to rock again.

In Sweep Mode the red LEDs sweep left for flat or right for sharp, more like a traditional tuner. Either mode has its uses. I found the Sweep Mode was best for easy tuning on the go, while Strobe Mode gave the kind of fine-tuned accuracy needed to intonate a guitar – which I’m doing a lot right now as the weather cools down and all my guitars cry out for their seasonal adjustment. I also really appreciate Strobe Mode when using the fine tuners on my locking tremolo equipped guitars.

GLORY GLORY HALLETUNER
I’ve immediately become a big fan of the Planet Waves Chromatic Pedal Tuner. Sure, there are other tuners out there that do some of the things it does, but it’s rare to find them all packed together into one unit, especially one so obviously well built. Each of its special features would be selling point enough in another brand – true bypass, strobe mode, pedal power provider – but combined they form an unstoppable killing machine of tuning accuracy. It also looks like something out of Darth Vader’s utility belt, which has gotta be a good thing.

Aaah, Boss tuners. Who hasn’t flung one of these into their gigbag and later had it save their life?

BOSS is proud to announce the availability of a new full line of tuners for every price range and level of musician with the TU-1000, TU-12EX, TU-12BW, and TU-88 digital tuners.

Featuring a huge, striking, high-intensity LED meter for visibility on dark stages or outdoors, the flagship TU-1000 offers ultra-smooth, accurate motion and superior brightness to make tuning fast and easy. Its unique floorboard design powers up to six effects processors and includes two audio outputs. The TU-1000 is the new tuner of choice for the professional touring guitarist.

The TU-12EX features the famous BOSS needle-type meter and LED tuning guide in a sleek thin-line body and compact size. New features include a flat tuning function, reference tone, auto-off, and Accu-Pitch???, which helps musicians verify their tuning by sounding a beep when the correct tuning is reached.

The TU-12BW features an expanded tuning range to correspond to a wide range of brass and wind instruments. Featuring the famous BOSS needle-type meter and LED tuning guide, the TU-12BW also includes a Contact Mic and dedicated Holder to attach on music stands.

The BOSS TU-88 brings stylish, portable, and accurate LCD tuning to musicians at an affordable price. In addition to authentic BOSS’ tuner and metronome features, the TU-88 features a built-in headphone amplifier, so players can directly monitor or record sounds from stomp boxes or electric guitars with the built-in speaker simulator. Guitarists can also jam along with songs from a CD or MP3 player with the new mix input function.