Yowza, yowza, yowza. Just saw this press release over at the very extremely excellent Guitarsite. It combines two of my favourite things: Bigbsy tremolos and guitars with points so sharp you can use them to bring down a rampaging wildebeast.

Using Gibson’s Les Paul Standard as its base design, the new 2009 Limited Run Series Les Paul Florentine with Bigsby Tailpiece combines the Les Paul’s iconic form with avant-garde features that keep it one step ahead of everything else. The standard Les Paul cutaway gives way to the wider and deeper Florentine Cutaway.

First used in 1902 on Gibson’s O-style guitars, and traditionally found on legendary Gibson models such as the Byrdland, the ES-175 and the ES-295, the Florentine Cutaway comfortably enhances your reach to the higher register of notes. Like all the guitars from the Limited Run Series, only 350 of these unique Les Pauls will be produced and distributed. Each one comes with a black Gibson hardshell case and a special Limited Run Series certificate of authenticity.

The Les Paul Florentine’s most prominent feature is its chrome Bigsby vibrato tailpiece. Essentially the same design as when it was introduced in the mid 1940s, the Bigsby vibrato tailpiece model B7 allows you to bend the pitch of notes or entire chords for vintage-style vibrato. It has been a fixture on many Gibsons, and was named after its late inventor, Paul A. Bigsby, who sold his Bigsby Guitar company to former Gibson President Ted McCarty in 1966. This classic piece of guitar hardware performs flawlessly thanks to several added enhancements — including a white graphite nut for smooth string action, a set of locking Grover tuners to help keep the strings in tune, and a Schaller roller bridge to help the strings return to the original tuning after using the Bigsby vibrato.

The rest of the Les Paul Florentine with Bigsby Tailpiece is a traditional Les Paul. The body consists of a solid mahogany back topped by a AA-grade maple top with single-ply antique crème binding. The Florentine also sports the traditional Vintage Sunburst finish, and the neck is the standard Les Paul mahogany neck with a rounded profile and rosewood fingerboard. Other unique appointments include the new Quick-Connect control pocket assembly, which keeps your guitar cord securely connected to the guitar, and a set of Dunlop locking strap pins. 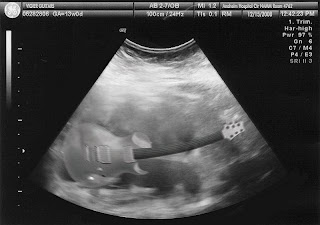 Here’s something very cool I saw on GuitarSite.com.

Vigier is preparing to release their first ever single cutaway electric guitar. It obviously seems to be very much Les Paul-inspired, with that general outline and pair of humbuckers, but check out what appears to be a stylish-as-heck carve on the bass side (it could just be a trick of the light and I’ll be on the lookout for a proper photo for confirmation), and an aggressively pointy treble side cutaway.

Over to you, press release (I always feel like Jason Lee saying ‘NOW, Silent Bob’ in Mallrats when I say that).

Vigier has introduced a new addition its family-the very first Vigier single-cutaway electric guitar. This elite baby will deliver the hottest sounds of all guitars in Vigier’s product line. The single-cut body design reflects a combination of modernism and tradition, which is exactly what this new Vigier model is about.

Like all Vigier instruments, the new single-cut guitar features a wood neck reinforced by a carbon-fiber bar that utilizes the company’s exclusive 10/90 system (10% carbon fiber/90% wood). The guitar is equipped with the new Vigier nut made of Teflon, which dramatically reduces friction at the nut, where most tuning problems typically occur. With a carbon-fiber reinforced neck and the new Teflon nut, overall tuning is greatly improved and the instrument itself is extremely reliable.

This sharp-looking babe has a solid alder body with a beautiful flamed maple top.

The bridge and tailpiece are Vigier’s original design and include a unique feature that makes it possible to lock any pieces of the bridge in place once the setup is done. This useful attribute guarantees an improvement in tone, greater sustain, as well as better tuning. The new single-cut model is equipped with a pair of humbuckers, a 5-way pickup selector switch for a variety of sounds, volume and tone controls.