BOSTON, MA – (Thursday, May 12, 16) Johnny Ramone’s vintage Hamer guitar will be featured in an upcoming live auction event from Boston-based RR Auction. The vintage white Hamer right-handed custom electric guitar, embossed with its serial number on the reverse of the headstock, “0185,” and signed and inscribed on the back in black felt tip, “To Adam, Johnny Ramone.”  END_OF_DOCUMENT_TOKEN_TO_BE_REPLACED

One of the coolest guitars on show at the Winter NAMM Show this year was the Framus Idolmaker, a unique instrument designed by guitarist Stevie Salas with Framus’s Marcus Spangler and Hans-Peter Wilfer. It’s an incredibly original guitar that only vaguely recalls the merest possible hints of anything you’ve seen before, and when Salas was in Australia recently I jumped at the chance to interview him about it. But I also took the chance to chat about something very near and dear to my heart: his most triumphant guitar solo at the end of Bill & Ted’s Excellent Adventure. Here’s our chat.

So what the hell are you doing in Australia?

Y’know, I’ve been there many times before but I came down to do one song with a band from the Northern Territory, the kids of the band Yothu Yindi. They have this really cool band (East Journey) and somebody asked me if I’d come down and cut a track with them. And any chance I have to come down to Australia, I’m gonna take it.  END_OF_DOCUMENT_TOKEN_TO_BE_REPLACED

Few guitarists are as endlessly creative as Living Colour’s Vernon Reid. One of those rare individuals who seems to be able to summon inspiration and individuality to them on request, Vernon’s playing ranges from the subtle and traditional to the sublimely outrageous. Living Colour are in Australia for the Soundwave festival and a few of their own side shows with Alter Bridge. I Heart Guitar caught up with Vernon recently to talk about it.

Correct me if I’m wrong but did you guys book this through Twitter? It kinda looks like that’s how it happened! I saw the Living Colour Twitter account tweeting to Soundwave that you’d like to do the festival, and a few weeks later it was announced.

I guess that’s the power of social media!  END_OF_DOCUMENT_TOKEN_TO_BE_REPLACED 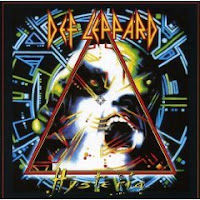 Before I jump into this review, a little background. I turned 10 in 1988. I know some of you were probably at the end of your rockin’ teens then, and others of you weren’t even born yet. But for me, at the age of 9 years and 51 weeks, all I could think about was Def Leppard. I didn’t even have an album yet, but I videotaped a few songs off the TV (on Beta video tape: ask your history teacher), and I was an expert at drawing the Def Leppard logo on my pencil case, in between Voltron and Santa. I begged and pleaded to my parents: my birthday’s coming up, please please please please please can I have Def Leppard’s ‘Hysteria’ tape?

My birthday finally rolls around. My first present is an awesome, 80s-style boom box with TWO TAPE DECKS and, oh sweet lord, a 5-band graphic EQ. I thought this was instantly the coolest thing in the world. My next present was obviously a cassette, all wrapped up and bursting with rock potential. This was my Def Leppard tape! Finally I could embark upon my life as a little denim-clad rocker. Before that, I listened to The Beatles, Paul McCartney & Wings, and Songs Of A Psychedelic Age, a double cassette set my dad had, which included not only Jimi Hendrix and Cream, but also an ad for a Vox wah wah. Awesome. But I digress: My shaky little hands nervously unwrap the cassette, and I hold my breath as I await the first sight of my very own cassette copy of Def Leppard’s ‘Hysteria.’

What do I see instead?

Now, for those of you who don’t know who Jason Donovan is, he was an actor on an Australian soap, and he made an ill-advised foray into pop music. This video will tell you all you need to know.

Of course, being a whiny little 10 year old, I begged, pleaded and cried until I got ‘Hysteria’ too, and to this day I still have that very cassette. It’s in my car’s glove box right now.

Anyway, enough of that. On to the review of Cheap Trick and Def Leppard at Melbourne’s Rod Laver Arena.

Cheap Trick were initially supposed to come to Australia last year as part of a double bill with Thin Lizzy, but that tour fell through. It seems that plans to come to Australia often fall through for the band: guitarist Rick Nielsen famously planned to move here in 1972 but changed his mind when the immigration department wouldn’t let him bring his dog). Despite vocalist Robin Zander nursing a sore throat and feeling a bit under the weather, the band still put on an energetic, powerful show. Never having seen them before, I’m not sure if Nielsen usually does the majority of between-song banter, or if he was covering for Zander, but he was a huge part of keeping the show flowing, even taking a vote from the audience on whether he should keep a guitar given to him by a local luthier (he seemed pretty unhappy with the axe from where I was sitting, and elected to ditch it). Nielsen threw about a trillion guitar picks into the audience over the course of the night (sometimes whole fistfuls at once; sometimes flicked from under his leg, sometimes used to strum a single chord before being skimmed into the crowd), and he brought out a few gems from his famous guitar collection, including various Hamer Standards, a few Gibson Les Pauls, and his legendary 5-necked beast which, in the true spirit of rock excess, he used for only about a minute or so during ‘Goodbye Now.’

Cheap Trick played the songs I expected: ‘Surrender,’ ‘Dream Police,’ ‘I Want You To Want Me.’ But the big surprise for me was their 80s hit ‘The Flame.’ I’d read that the band were particularly unhappy with this power ballad, and I just assumed they wouldn’t play it. But they did, and it was one of the highlights for me, not because it’s a lighter-waving anthem or, like, so beautiful, man, but because they played it with a sense of irony and pisstake-ism, with loud lead guitars and Neilson’s exaggerated backing vocals. Zander missed one particular high note each time it came up, but that was the only real sign of his vocal woes. Nielsen’s playing was sloppy and edgy, sometimes suffering from his constant pick-flinging, but it contributed to the party vibe of the set. The crowd was a little restrained for the most part and you could pretty much hear about 50% of the audience saying “Oh, Cheap Trick is THAT band” whenever one of the big hits was played

Def Leppard burst out to the techno-tribal drum thump of ‘Rocket,’ one of the songs I taped off the TV way back when. The set leaned heavily on the ‘Hysteria’ album as well as a few tracks from ‘Pyromania’ and ‘Adrenalize’: ‘Animal,’ ‘Love Bites,’ ‘Hysteria,’ ‘Armageddon It,’ ‘Pour Some Sugar On Me,’ ‘Rock Of Ages,’ ‘Photograph,’ ‘Make Love Like A Man’ and ‘Let’s Get Rocked.’ From ‘High ‘n’ Dry’ they played ‘Bringin’ On The Heartbreak,’ and the instrumental ‘Switch 625’ also got a showing – an interesting choice since neither Phil Collen nor Vivian Campbell were in the band when this guitar showcase was written.

They also played ‘Two Steps Behind’ and ‘When Love And Hate Collide,’ and there were two tracks off the latest album, ‘Songs From The Sparkle Lounge,’ which were well received by the crowd even though most of the audience looked like they hadn’t bought a new album since about 1991.

It was surprising to hear those highly-overdubbed songs reorganised in the context of two guitars and five vocalists (even five voices can sound minimal when the original songs featured such heavy layering). The band sounded slick and they weren’t afraid to throw in some improvisation here and there. Singer Joe Elliott stuck largely to the recorded vocal melodies, which was actually kinda refreshing, since so many singers seem to get bored live, and start shifting around notes and rhythms.

I was especially impressed by the guitar playing of Phil Collen (one of my very early guitar heroes, I must admit). He punctuated melodies with wild squeals and sustained notes from his signature Jackson guitars, and wasn’t afraid to bring out the shred licks when necessary. Vivian Campbell, too, had his fair share of pyrotechnic moments, playing a sparkly Gibson Les Paul for most of the set and taking a few respectful liberties with original guitarist Steve Clark’s solos.

While I found myself enjoying the looser rock vibe of Cheap Trick more than the slick showmanship of Def Leppard, I still enjoyed the hell out of both bands, and while I don’t listen do Def Leppard much any more these days (a dude tends to move on once he discovers Frank Zappa and Mike Keneally), I’m glad I finally got to see them, 20 years (!!!) after unwrapping that Jason Donovan tape.

CLICK HERE to buy the Japanese version of Cheap Trick’s At Budokan: The Complete Concert [with bonus DVD]