The Cole Clark Guardian is something of an Aussie guitar classic. Obvious nods to 50-something years of guitar history notwithstanding, it’s the little details that have made this guitar stand out from others in the field. Now Cole Clark is releasing the Hollow Baby, a variant of the Guardian which features, yes, an internally carved hollow body with a classy bass-side f-hole. I was lucky enough to get my hands on two Hollow Baby models.

Components include CTS pots, Switchcraft jacks, OAK switches, Dunlop frets, Graphtech nut, Grover vintage tuners and Elixir strings. The tremolo is a two point system (more stable than a vintage six-screw version) with push-fit arm, featuring a machined solid steel sustain block rather than a sintered steel sustain block. Wood options are Bunya or Queensland Maple for the body, maple or blackwood for the neck, and maple or rosewood for the fretboard. The finish is nitrocellulose lacquer, allowing the wood to breathe and opening up the tone that little bit more. There are three pickup types on offer: Seymour Duncan USA Vintage Flat SSL-2; Kinman Zero Hum ‘Blues’ Set; and Cole Clark ‘Ultrasound’ (w reverse bridge pickup). The latter, which I was unable to test at the time of review, has a reverse-oriented bridge pickup to pick up more treble from the bass strings while reigning in the high end of the treble strings. But whichever model you choose, each has its own character and is suited to a slightly different vibe. It’s also interesting to note that Cole Clark has chosen pickups with a flat pole piece stagger to suit the flatter 12” neck radii.

And what a neck. This flatter shape is ideal for extended playing sessions and chording, and is also great for faster styles. A more rounded radius may allow you to grip the notes a little more firmly but many players prefer the extra finesse that can be added with flatter designs. You also have far less chance of fretting out a note when you bend it. In all honesty, as someone who’s collected 80s-style shred guitars for half my life, I was very comfortable with this neck, and personally I’d love to see it on a two-pickup Guardian with a bridge humbucker, neck single coil, no scratchplate and a Floyd Rose – y’know, a stripped back screamer. The neck is topped off with Cole Clark’s iconic ‘Curlicue’ scroll-topped headstock shape, which recalls – without actually copying – the 1940s and 50s work of guitar pioneer Paul Bigsby. Fretwork is perfect, with no rough edges or file marks to offend the eye or hand.

The first thing you may think when you pick up one of these Hollow Babies is ‘Well, I’m pretty sure I can guess how this is gonna sound.’ After all, while there are many key differences, it shares some common traits with a pretty well-known axe. But, as they say in David Lee Roth videos, ‘Fugeddaboutit.’ Any preconceived notions you may have about the tone of these instruments will be immediately dispelled upon picking the first note. Even unplugged you’ll notice that you simply can’t judge the Hollow Baby on what you know about other guitars that look somewhat like it. The acoustic tone is lively and midrange-heavy, with restrained treble and round bass – pretty much the opposite of the tone you’d expect from a solidbody version of this design.

Plugged in, the difference is even more pronounced. We were loaned two Hollow Babies to review: one in two-tone sunburst with Seymour Duncan Vintage Flat SSL-2 pickups and one in black with the Kinman Zero Hum ‘Blues’ Set. 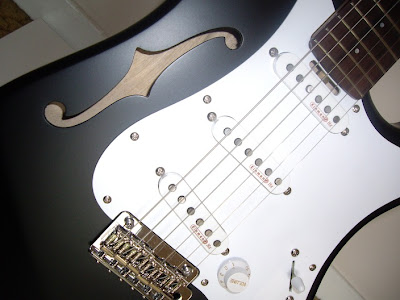 The black Hollow Baby, equipped with Aussie-made Kinman pickups, actually sounds a lot brighter than the unplugged tone may indicate, and there’s not much bass – at least, not of the booming, overbearing variety. This clears the lower frequency range to make complex close-voiced chords ring clearly and without extraneous dissonance. My favourite pickup setting was the neck/middle combination, which had a steely treble and reduced midrange, but with all the sonic benefits of the hollow construction: extended dynamic range and a certain liveliness to the note.
Regardless of the pickup setting you select, the attack is very immediate and the sustain is quite pronounced, with a nice natural tail.

One of my favourite tones was achieved by turning the bridge/middle tone control all the way down. While this would muddy up the sound on most guitars, on this one it simply reigns in some of the strident treble, fattening up the pickup for big lead sounds. A lot of players tend to ignore the tone control altogether but here it’s so carefully and complementarily voiced that it would be a crime against music to not explore its usability.

My favourite settings all seemed to be achieved with sparkly clean and slightly dirty – but not overdriven or distorted – tones. There comes a point where the very things that make the Hollow Baby work so well – evolving midrange, lively dynamic response and delicate interactivity – start to work against it when you pile on the distortion. That’s in no way a criticism of the guitar. It’s just that it’s presented in its best light when you can actually hear what’s going on. 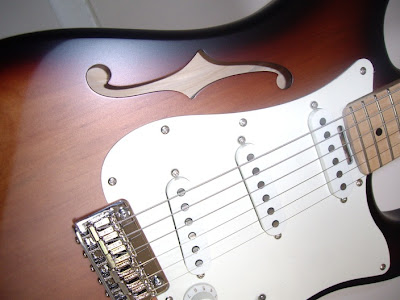 The first thing that struck me about these pickups was that they are very quiet. At high gain levels you’ll hear a kind of ‘ksssh’ off in the background in positions 1, 3 and 5, but only in extreme cases. In normal playing conditions you’re not likely to hear any noise at all. Amazing. Like the Kinman-equipped Hollow Baby, the Seymour Duncan version has a very bright and stabby tone, but this time the tone control doesn’t cool down the bridge pickup in quite the same way. The tone overall is a bit more gutsy, with powerful but not harsh treble. My favourite setting was the neck pickup by itself. This pickup is very midrange-heavy, making it great for bluesy solos and ringing indie melodies. It’s especially happy when you combine fretted notes with open string drones. I was also continually drawn to the middle pickup, which was home to a lot of fat lead tones. In fact, the middle pickup on this guitar reminds me of a fat bridge pickup on some others. I also found a great overdriven tone with the middle/bridge tone control down about 3/4 of the way while using those two pickups in combination.

This Hollow Baby responds especially well to soft playing, either with a pick or the fingers. Notes have an immediate impact but then fade out gradually and musically. You can also get some great textures by picking with the edge of your thumbnail around the 12th fret while holding down chords around the 7th-9th frets. On some guitars this technique sounds a little ‘meh,’ while others really take the sound and run with it. This one bolts.

Surprisingly, I found myself drawn to this particular Hollow Baby for John McLaughlin and Allan Holdsworth style fusion. There’s something about the way the notes sustain which lends itself to that kind of ‘fast/slow, soft/loud, up/down’ phrasing you often find in fusion, and the tone itself sits very nicely as a solo instrument.

Both of these guitars are very well made, with lots of clever little design details – the fretboard radius, the wiring of the tone controls, the pickup selection, the neatness of the f-hole. The different pickup choices are a great way of demonstrating how adaptable this basis design is to different types of music. The Kinman-loaded model would be my choice for country and cleaner styles that require lots of spank and twang, while the Seymour Duncan model would be my pick for edgy blues and dirty classic rock. I wish I had the chance to try the Cole Clark-loaded version too, but whichever way you shake it, Cole Clark’s come up with a very unique take on what at first seems to be a traditional design. Strip away the preconceptions though and you end up with something altogether unprecedented.