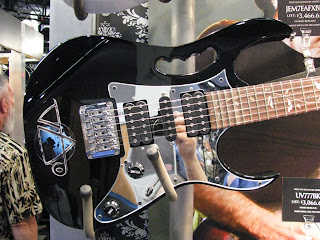 So it seems there’s more to the now infamous VAI/Earth graphic that adorns the new Ibanez JEM7EAFXBK than originally thought.

The display accompanying the guitar at NAMM reads:

The newest member of the JEM family of Steve Vai signature guitars is the first JEM to feature a fixed bridge, which alone makes it a modern guitar milestone. But as Steve Vai’s own global graphic design on the body indicates, the JEM7EAFXBK is the first of Ibanez’s World Wood Program dedicated to increased utilisation of sustainable hardwoods in guitar making. Basswood is used in the body not only because of its tone, light weight and ability to work well with effects, but also because basswood has long been recognised by progressive guitar makers as a sustainable hardwood with a fast growing cycle. The maple used in making the neck is verified as a sustainable wood by the United States Forestry Service and the Indiana DNR Division of forestry.

Ibanez and its artists and designers believe that the use of renewable resources in musical instruments is a necessary and important contribution to the livable world.

As Steve Vai himself says, “This guitar will give you wood forever.”

2008 is truly the year of Paul Gilbert and Ibanez. At his clinic in Geelong last year, Paul mentioned that he had been using a modified ADA Flanger for years, and that he’d suggested to Ibanez that they reissue one of their vintage flanger designs, which he said had a very similar circuit to the ADA. It seems they listened to him: they’re now releasing the Paul Gilbert AF2 Airplane Flanger.

Paul’s ADA flanger had a modified feedback control to get that wild, whammy-like sweeping sound, and this pedal has the same feature incorporated.

The Paul Gilbert Signature AF2 Airplane Flanger is two fantastic pedals in one rugged package. One section is a traditional chorus flange; the other is the “Taxi Take Off” flange (hence the “Airplane” moniker), which provides virtuoso guitarist Paul Gilbert’s own “crazy flange” sound, which includes shifting the pitch up and down. Time to buckle up.

You can read more about the pedal over at the Random Chatter Music blog. 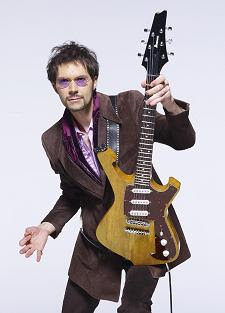 The venerable Rich Harris from Ibanez Rules has confirmed in a posting on Jemsite that the much-rumoured Ibanez Fireman (reverse Iceman, geddit?) Paul Gilbert model will be released in extremely limited quantities, and it ain’t going to be cheap at $9,333.33.

Rich said: “There will be 50 Fireman’s total. 45 SSS for World distribution, 18 to HUSA, and 5 in HH for Japan distribution only, probably by lottery the way they usually do.

Free plug for Rich: I’ve bought a bunch of parts from Ibanez Rules over the years, and while I’ve never bought a guitar from him, his setups are legendary.

This one has been floating around the net for a few weeks, but I didn’t really want to post about it because unlike those guitars published on the Thomann website last month, the image of the new Jem was obtained by somewhat shady means (someone snooped around and found an Ibanez website photo directory with photos that were to be put on the 2009 website).

But now it’s official and here it is: the JEM77EAFX. What do you think? Personally I love it – except for that decal. And I’m assuming it’s under the clearcoat so you’re stuck with it. It kinda defeats Vai’s original intention of keeping his name off Jems so they wouldn’t just be associated with him. The decal instantly turns this into a guitar for Steve Vai and people who wish to say loud and clear “I’m totally a Steve Vai fan,” which is cool but I’d much rather have a guitar that doesn’t scream VAI in big letters. I think this one’s a bit of a missed opportunity.

The specs are pretty similar to the JEM77VBK, and I dare say that if you really want a fixed bridge Jem, you might as well just buy one of the other models and install a Tremol-No.

It’s been a long, long time since Ibanez released a 7-string with a maple fretboard. The only one I can think of is the UV777GR, a green Universe model made in small quantities in the early 90s.

I’d love to get one of these and swap out the pickups for a Blaze set, but otherwise it’s perfect. Want!

Ibanez has confirmed the re-release of the Paul Gilbert PGM100, and has launched a mini site celebrating Paul’s 20 years with the company.

The mini site has very informative comments from Paul about each of the PGM models over the years, including the less often-seen models based on the Iceman (PGM600) and Talman (PGM900), and of course his violin-shaped model, the PGM700.

Give or take a few months, it is the 20th anniversary of the Ibanez PGM100 guitar. Whenever I think of this guitar I think of Mr. Big. That was the band that I was in when I first started playing the guitar. I always remember my first Japan tour, taking this guitar on stage, and arguably doing some of the best guitar playing I’ve done in my life. A lesser known record that I did with the guitar is “A Tribute to Jimi Hendrix”, which was kind of an accidental gig that I did in Germany. I wasn’t supposed to play any Hendrix songs. I was just supposed to do a jam, and the main artist got sick. So I was saddled with doing the whole night. I did all those Hendrix songs with this guitar, and it’s some of my most fiery and shreddiest playing that I’ve ever done. The PGM100 accompanied me on that amazing gig as well. So, to me, it’s a very important guitar from some of my best musical times.

Over the years, I’ve continued to play the guitar. I used it for a lot of the later Racer X albums, because the sound was so good, so easy to play. It’s great for playing fast and getting good sustained notes. I’m looking forward to the reissue, because I want to get back into some whammy licks. I know it’s got a great locking tremolo on it. For the kind of 80s Racer X style, that’s a great addition to my sonic palette to have that whammy bar available. So that’s gonna be a lot of fun. It’s an amazing color, the combination of the blue and the pink f-holes. It’s instantly recognizable. Enjoy it! It’s back! The PGM100 by Ibanez. Rock and roll. I will, too. 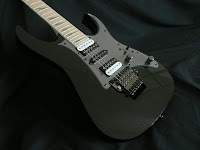 Wow, that didn’t take long. These guitars aren’t even officially launched until NAMM but Home For Tone is already selling one on eBay.

Moderator Jay from the Ibanez forum has posting this very interesting little tidbit about NAMM 2009:

As many of you have figured out by now, we will be releasing the new PGM401 as Paul Gilbert’s Signature Model for 2009. It’s a beautiful Ash body with black F holes (graphic) and a fixed bridge. You’ve seen the pictures from our sister distributors around the world. A great addition to Paul’s rich history of Signature PGM’s for sure!

For 2009, we will be celebrating a milestone in our relationship with one of the greatest guitarists of all time. 20 years of PGM goodness. And in keeping with Ibanez tradition, the 20-year mark earns this great musician a 20th Anniversary model.

Ok, I’ll give you some hints…

– It has the letters “RE” in the model number.
– It has two distinct, vibrant colors.
– Does not have a reverse headstock.

See if you can guess the model…

Jay later added that it’s not the rumoured Fireman models – besides, those don’t have vibrant colours and it’s unlikely that the hint about the two letters was a reference to the RE in Fireman. He later went on to say ‘think reissue’ – so is Ibanez going to reissue the original PGM100 or PGM200?