I’ve picked up a bunch of new I Heart Guitar readers over the last few weeks, especially thanks to some links on kickass sites like Guitar Noize, Melodicrock.com, Truth In Shredding, Random Chatter Music Blog, Premier Guitar and Guitarsite.com, so I thought it might be a good time to point to some previous articles, reviews, interviews and lessons. So here ya go!

A guide to using pedals 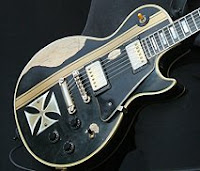 Word on the street (okay, the UK guitar magazine Total Guitar) is that ESP is working on a new signature model for Metallica’s James Hetfield, based on his customised 1973 ‘Iron Cross’ Gibson Les Paul. It will be officially unveiled at Winter NAMM 2009 in ESP and LTD versions.
No doubt this guitar will be based on ESP’s Eclipse model, because if it was a straight copy of the Les Paul, Gibson’s lawyers would be out for blood.
Earlier this year, there were rumours Hetfield was about to leave ESP in favour of Gibson, which would have been good news for anybody who wanted an authentic late 80s-early 90s-style Hetfield Explorer signature model. I’m not sure if that was all just talk – fans online have speculated that Gibson was unwilling to make a signature model for Hetfield, but that doesn’t really sound right to me. If they can make a Kiefer Sutherland model, I’m sure they would appreciate the dollar-spinning potential of an EMG-loaded, white Helftield Explorer.

CLICK THE IMAGE to buy the ESP LTD James Hetfield Truckster from Music123.