Seymour Duncan had some really cool new stuff on show at NAMM, though you won’t find them on the SD website or social media pages yet –  the formal, official announcements will take place a little closer to the products’ respective release dates. But how’s this for cool: SD is releasing a Jason Becker signature humbucker, the Perpetual Burn. It’s a bridge humbucker with a relative moderate output, and it’s based on pickups that Jason was developing with Seymour Duncan back in the David Lee Roth A Little Aint Enough era before ALS took his ability to play. But Jason was very involved in the prototyping process of the new pickup, with Michael Lee Firkins playing the pickups and Jason giving feedback. It’s a 12k Alnico V pickup which fits in there somewhere between the ’59 and JB. END_OF_DOCUMENT_TOKEN_TO_BE_REPLACED

Joe Holmes has set up a YouTube channel for his new band, Farmikos, and they’ve posted a teaser for the song “Exit Stencils” which you can watch below. The video features Joe cutting lead guitar for the song at Mouse House in Pasadena, California. A student of Randy Rhoads (literally, not just in a ‘he studies his playing’ way), Joe has held a few pretty damn high profile gigs over the years, including playing in Ozzy Osbourne’s band between 1995 and 2001, and playing for David Lee Roth on the tour for the A Little Ain’t Enough album in place of an ailing Jason Becker. The dude can play, as you’ll hear in the video. Check out the Farmikos website, Facebook, Twitter and YouTube. END_OF_DOCUMENT_TOKEN_TO_BE_REPLACED 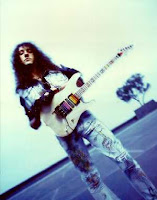 Who else reads Metal Sludge? Although it’s not updated as often as it used to be, when its notorious 20 Questions were a weekly occurrence, it’s still hilarious, still poking 80s rock in the ribs, and still a site I check pretty much every day just in case.

Tell us about your latest CD Jason Becker “Collection”. How did you go about choos-ing what tracks to include. What kind of time, etc.. goes into something like this for you?

I had wanted to do a “best of” album for a while. I wanted one “perfect” CD for new people who are interested in hearing me, but who want to get my whole scene without having to buy all of my albums. As you know, my music can be diverse, so if you buy one album, you don’t get the whole picture. I also wanted my old fans to have new stuff. Mike Varney and I talked about waiting for me to write and record new songs. I was nervous about that because I hadn’t written music ever since I couldn’t move my hands or head. It would be a completely new process which might not work. I had to try it though because I owed it to myself and my fans. The California Department of Rehabilitation had just gotten me a new computer, music software and some great studio tools. My girlfriend and I had just broken up, so sex wasn’t a distraction anymore. It was time to see if I was still good or did I lose it all and suck? It was an incredible feeling to be creating again.

I picked my older songs that move me the most, which coincidentally are the pieces my fans write me the most about. These songs apparently speak to “normal” people as well as guitarists. Even when I shred, I am trying to make music. I am happy that people hear my emotion and feelings in my music and playing.

I also added some bonus material that is available when you stick the CD in your computer. I have eleven minutes of me noodling on the guitar back in ’89 for a couple of my students. Also, there are my guitar demos for my guitar concerto “End of the Beginning.” Michael Lee Firkins played on the final version. I thought it would be fun for people to see how the piece started out, with me playing.

It took quite a while, only because of the new songs. I also had to work around my co-producer, Dan Alvarez’s schedule. He did so much work; he is such a genius.

While you’re at it, check out his classic album, Perpetual Burn 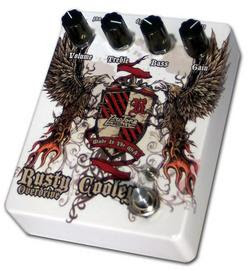 ProTone Pedals have expanded their relationship with Dean endorser and unstoppable shredding machine Rusty Cooley to include a new signature overdrive pedal.

Rusty recently helped the company out during the prototype phase of their Jason Becker Perpetual Burn distortion pedal. I haven’t played one yet but I hear from those who have that it’s freaking amazing.

Rusty is a frequent columnist in all of the major guitar magazines and is consistently named one of the top shredders of all time. Rusty continues to build a rabid following of tomorrow’s shredders with his wildly successful instructional DVDs, his progressive metal band Outworld, and instrumental solo CD. The all analog design offers a smooth overdrive and huge volume boost along with treble and bass controls to add brawn and flexibility to your tone shaping possibilities.

Rusty will be demoing his signature pedal at the Pro Tone Pedals booth at this years NAMM show. For a schedule of appearance times visit ProTone Pedals online or http://www.rustycooley.com/.

For more information, visit their web site at http://www.protonepedals.com/ 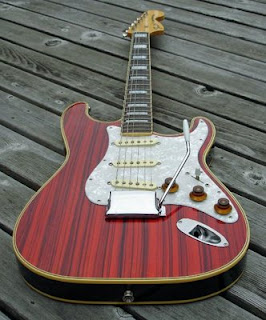 I recently stumbled upon the excellent Strat-o-blogster blog which features lots of great Stratty goodness. Site owner JP has a very easy-to-read style, is very knowledgable and has a great sense of humour – some of these posts have me spraying coffee out my nose. I’m slowly working my way through backposts, in between practicing my Jason Becker arpeggios and trying to nail the marimba solo from St Alphonzo’s Pancake Breakfast

And what better way to while away the hours when I’m supposed to be working than looking at unusual and awesome Strats like the Japanese-made 68 Zebrawood Stratocaster reissue pictured here?

I’ve picked up a bunch of new I Heart Guitar readers over the last few weeks, especially thanks to some links on kickass sites like Guitar Noize, Melodicrock.com, Truth In Shredding, Random Chatter Music Blog, Premier Guitar and Guitarsite.com, so I thought it might be a good time to point to some previous articles, reviews, interviews and lessons. So here ya go!

A guide to using pedals

ABC affiliate KGO-TV in San Francisco visited Jason Becker recently for a news story. You can watch the video here. It’s so cool to see Jason still composing (and giving cheeky answers to the interviewer).

During the story they show a few shots of the Paradise Guitars USA Jason Becker signature model.

When I was about 14 I bought the second Cacophony album on cassette, but there was something wrong with the tape and on side 2 the left side of the mix was completely silent. It took years before I found a copy on CD so I could hear what i was missing on that other side of the stereo spectrum! I took my tape to a guitar lesson and played ‘Go Off’ for my teacher and said “I wanna play like that!” He was a great teacher but Jason’s style was a million times removed from his, so I never did learn that song. Maybe it’s time I did.

Discussion time! What are your favourite Jason Becker songs or solos?