It’s a very sad day for guitarists. Dr Jim Marshall OBE, founder of Marshall Amplification, has died. I’ll always remember how proud I felt bringing home my Marshall amplifier. And Jim’s introductions to Marshall manuals always felt like you were being welcomed into a special club. One that I’ll always be proud to be a part of. Rest in peace, Dr Marshall, and thank you.

Marshall Amplification has posted the following:

Jim Marshall. While mourning the Guv’nor though, we also salute a legendary man who led a full and truly remarkable life.

Jim’s ascent into the history books as ‘the Father of Loud’ and the man responsible for ‘the Sound of Rock’ is a true rags-to-riches tale. Cruelly robbed of his youth by tubercular bones, Jim rose to become one of the four forefathers responsible for creating the tools that allowed rock guitar as we know and love it today to be born. The ground breaking quartet also included the late, great trio of Leo Fender, Les Paul and Seth Lover – together with Jim, they truly are the cornerstones of all things rock.

END_OF_DOCUMENT_TOKEN_TO_BE_REPLACED 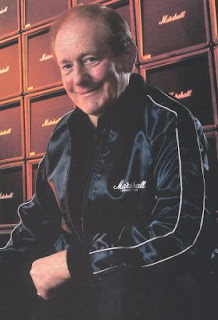 In a rare and candid interview from 2001, the man behind the legendary amplifier talks to Joe Matera about the Marshall legacy.

“I really like my old Marshall tube amps, because when they’re working properly i.e. when the volume is turned up all the way, there’s nothing can beat them, nothing in the whole world. It looks like two refrigerators hooked together……..”
James Marshall Hendrix – Los Angeles, 1967

Joe Matera: So how did a drummer end up developing a classic guitar amplifier?

Jim Marshall: Well, I’d started in show business as a singer. I’ve been in show business for 64 years, singing for 64 years but drumming for about 58 years. I started drumming afterwards you see. It’s just something that progressed over the years from showbusiness to teaching. I taught many of the top drummers like Mitch Mitchell with Hendrix, Micky Waller with Rod Stewart…many of the top drummers, I’ve taught during the 50’s and then decided to open a drum shop. But that went wrong because Pete Townsend and Ritchie Blackmore and one or two others got onto me and said “why don’t you stock amplifiers and guitars?”. I said “well, I know a lot about drums but not much about guitars”. They told me if I would stock them, they’ll buy them from me instead of going to the West End of London because they were treated there in London like idiots. The rock and rollers used to use the Fender Bassman. That was the nearest thing to the sort of sound they wanted. Later on in 1961 they said to me “well, the amplifier’s (Fender Bassman) not built to give us the correct sound”. So I got together with a young electronics engineer, he was only 18, but he was brilliant and after 6 proto-types we produced the first rock and roll amplifier and its been that sound ever since. That’s how I got into it and I actually only wanted to do it for my own shop and my own customers but it grew and grew and grew until it’s where we are now. We put roughly 4,500 units a week, amplifiers and cabinets, into the world market.

JM: In many magazines over the years, Pete Townsend has always been credited with developing the idea for the Marshall “stack”. Is this true?

Jim Marshall: No! Unfortunately, a lot of magazines write what they think readers want to read. What really happened was this. Pete came to me and said, “the 50 Watt amp I’m using is not loud enough for me, I want a 100 Watt”. He added, “but instead of a 4X12 cabinet, I want an 8X12 cabinet”. I said “well what sort of cabinet do you want?”. He said ‘a great big square one!” and I replied “that’s going to look stupid with a little amplifier on top, but leave it with me”. I said “what I think you need is the first 4X12 I designed, which was a straight fronted one and the second one to make the amp and cabinet look as if it was designed like that, cause that’s why I put the angle on. We’ll make that a stack”. Pete replied “No, I don’t want two cabinets…put them all in one cabinet!” I thought alright it’ll still be the image of the stack, but it’ll be in one cabinet. Well, I was very strong in those days and I had an athlete working for me on the cabinet side and we carried these cabinets out of the factory in Hayes, Middlesex and they were so heavy it was unbelievable and I said to Pete, “your roadies going to kick my ass!” and he said “they get paid!”. Well, two weeks later he came back and said “your right Jim. I tried to help one of the roadies top put one of these cabinets into the truck and IT was heavy!. Have them back and cut them in half”. I said well if I cut them in half they’ll fall to pieces. So leave it to me to go back to what I suggested in the first place to make it a stack”. And that’s the way it came about. It was him that wanted 8X12’s because of the 100 Watt heads, they were the first three 100 Watt heads we ever made…and he had them. Of course the 100Watt was no good in those days with one 4X12, because the speakers in those days were only capable of taking 25 Watts, unlike speakers today that can take 300, 400 Watts. Thats the way the stack really came about.

JM: You had so many of the early classic British bands actually form in your shop. Every one from Hendrix’s band to Deep Purple.

Jim Marshall: Mitch Mitchell, who was a child actor actually, came to me in the first place to ask me if he could have the job in the shop as the Saturday boy. Then he wanted me to teach him drums. Then Ritchie Blackmore was playing with one of my other pupils in a school group and they all came together in my shop. You see, all the guitarists that came in to see me were those playing with my pupils. I was the first drum teacher over here (England) to teach them rock and roll. And Micky Waller was the first one to get me to teach them, because he said to me “can you teach me to play this new stuff called rock and roll?” And I said “its only even quavers, basically its Latin American, so its quite easy and I’ll teach you”. Because the accents are in different places that’s all it is to it, and because I taught the drummers, the guitarists came in and it was like a labour exchange and thats where a lot of the early groups were formed, in my shop in London.

Jim Marshall: There’s another story to go with that too, the true story! I’d just finished a 15 year contract with a company called Rose-Morris and unfortunately being a pro musician, I thought to sign a 15 year contract with regular money coming in was the next best thing since sliced bread….and I was wrong! After about 3 or 4 months I realized I could outsell this company any day of the week and during that 15 year contract they never ever reached a million pounds turnover in a year!. So in 1981 I’d already done re-designing the appearance of some of the things and I was stuck to know what to call it and for weeks I was thinking how can I put this over. Then one day, I walked out to the car park, and looked at my number plate: JCM 800. That was perfect for the 80’s wasn’t it, so that’s how it (the series name) came about. I had bought that number plate way back in 1972, so it was very lucky I’d bought that number plate then.

JM: You were also contracted to do the VoxAC30 re-issues?

Jim Marshall: Yes, because that had gone through 7 different companies earlier who tried to make the AC30’s and 15’s and none of them established the real sound. And although I did not want to do the Vox AC30 and 15, it was a challenge to me because I knew if anybody could do it, we could re-create the original Vox sound which we’ve done. Everybody else gradually before us got worse until Rose-Morris did it and that was a disaster!

JM: What’s the secret to the enduring success of Marshall amps?

Jim Marshall: Well it’s having a good design team as I have now, probably the best in the world and sticking to the original sound. The original sound MUST be in the unit somewhere. Although with the Marshall amps these days, you know, you can choose what sound you like out of it, it can be country and western, jazz, rock and roll etc.

JM: What is the company’s direction for the next few years?

Jim Marshall: Exactly what we’re always tried to do, you know, it’s to produce the best in the world and keep the established Marshall sound going through because that’s what all the rock and rollers and heavy metal youngsters want. But to try and please all musicians too, that’s all we want to do and to keep the quality as it is now…the best.

JM: What has been the highlight of your career?

Jim Marshall: Well I suppose it was the first time I saw Marshall on television.

JM: You would have many stories to tell. Which one in particular is your favorite?

Jim Marshall: I suppose the best one is of course, in regards to my greatest ambassador and that was Jimi Hendrix. He was playing at Ronnie Scott’s in London and Mitch (Mitchell) was on drums with him, but the group that was playing there at the time were all using Marshall and he said “I’ve got to meet this Jim Marshall because my name is James Marshall as well”. So Mitch brought him into my shop and Jimi said to me, “I’ve got to have Marshall amplification”. And I thought, “Christ!, another American wanting something for nothing!”. But fortunately he said ” I don’t want anything given to me. I want to pay the full retail price but what I do want is service wherever I am in the world”. I thought, “Christ, that’s going to be a tough one” because we were only dealing with France, Germany and Canada at the time. They were the only places I had distribution, but his roadie at the time, came and spent two weeks in the factory learning how to change the bias and change the tubes or valves if they went down and do simple soldering. And we were never called out once by Jimi Hendrix. He actually purchased 4 complete stage set-ups to have in different places in the world so he would not have to transport any too far. And that’s one of the best stories of the company.