When I was in my teens, I had journalistic heroes in much the same way that I had guitar heroes, or how other kids had sports or film heroes. Guys like Jas Obrecht, Tom Mulhern, Joe Gore, Tom Wheeler and more (Alan Paul James Rotondi, Jeff Kitts, Jeff Gilbert, Pete Prown, Joe Bosso, Lisa Sharken, Charles Shaar Murray, Gary Graff… I could ramble on and on about these writers). Those first four names I mentioned, though, were very influential and they all played important roles in Guitar Player magazine. Now Jas Obrecht (along with Ryan Rhea and Christian Magee as JRC Media, LLC) have launched Pure Guitar, a new breed of guitar magazine with an aim of blending literate, in-depth journalism with the technology available to internet and mobile app users. Writers include Wheeler, Mulhern, Gore, Obrecht and fellow Guitar Player alum Jon Sievert, along with Wayne Goins (Director of Jazz Studies at Kansas State University), first-call studio guitarist Tim Pierce, and London-based Alissa Ordabai. 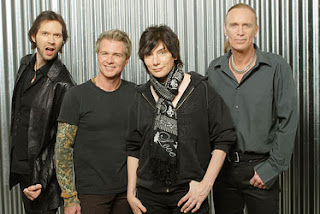 Joe Bosso (one of my guitar journalism heroes) from MusicRadar recently spoke with Billy Sheehan about the Mr. Big reunion.

Here are some excerpts.

“We got together last fall” says Sheehan. “It was just one of those things, the timing was right. We played a gig at the House Of Blues in LA and we smoked the joint. Afterwards, we all kind of looked at one another and were like, ‘OK, that was cool…Now what?”

“The way I look at it is, it’s like getting back with an old girlfriend,” says Sheehan. “But because you want to, not because you have to. All of us are doing fine in our solo careers. This is something that felt right, and after that one gig we were like, ‘We should do more of these. This was fun!'”

As for the animosity that tore the original lineup apart, Sheehan laughs and says, “You know what? I can’t honestly remember who was mad at who. That’s the great thing about getting older: you forget the bad times and remember the good times. And hopefully, this band will have a lot more of the latter.” 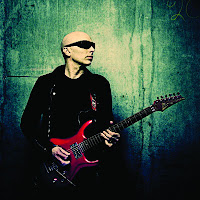 Satch has broken his silence about his decision to go after Coldplay for allegedly ripping off his song, ‘If I Could Fly,’ in an interview with the very excellent MusicRadar website (which everyone should bookmark).

Speaking exclusively to MusicRadar’s Joe Bosso (one of my journalistic heroes, by the way), Joe said “The second I heard, I knew… I felt like a dagger went right through my heart. It hurt so much. The second I heard it, I knew it was [my own] If I Could Fly.”

The article goes on to say:

As it turned out, Satriani wasn’t the only one who noticed the similarity between If I Could Fly and Viva La Vida. “Almost immediately, from the minute their song came out, my e-mail box flooded with people going, ‘Have you heard this song by Coldplay? They ripped you off man.’ I mean, I couldn’t tell you how many e-mails I received.

“Everybody noticed the similarities between the songs. It’s pretty obvious. It’s as simple as that – when you listen to a song and you say, ‘Wow, that’s a real rip-off.'” What makes the situation especially painful for Satriani is that If I Could Fly isn’t just any song. It’s a composition he’d been laboring over for well over 10 years before he recorded it. “I started writing it on the Flying In A Blue Dream tour back in 1988. But because of the way I write, sometimes songs take a while, as this one did. In 2003 I started demoing it in earnest. I played it on the acoustic guitar on a demo so I could sing the melody, then I demoed it on electric to get the sound. And the performance turned out to be so spontaneous, so right and so emotional, that it wound up being a keeper.”

Since If I Could Fly came out in 2004, Satriani has been gratified by the reaction it’s received from his fans, many of whom have called it one of his most captivating songs. “That was the intent all along,” he says. “It was a love letter to my wife, Rubina – a simple, direct expression of feeling. That’s what really hurts about this whole thing. That I spent so long writing the song, thinking about it, loving it, nursing it, and then finally recording it and standing on stages the world over playing it – and then somebody comes along and plays the exact same song and calls it their own.”

Since it was announced on 4 December 2008 that Satriani is suing Coldplay for alleged plagiarism, seeking a jury trial and “any and all profits” connected to Viva La Vida, his life has been turned upside down. “This has been the weirdest thing I’ve ever been involved in,” he says. “The media attention has been bizarre and surreal. I really can’t explain how I’ve felt over the past day or two.” “I did everything I could to avoid a court case”

Satriani stresses that his motives are ruled by artistic purity and an overriding sense of right and wrong. “Everybody’s assumes I’m trying to go after these guys in Coldplay, as if I’m doing this with malice,” he says “That’s the furthest thing from my mind. I’m just doing what I need to do as an artist, to protect what’s mine, to protect those feelings I put down in song. “I did everything I could to avoid a court case with this situation. But Coldplay didn’t want to talk about it. They just wanted this whole thing to go away. Maybe they figured this little guitar player guy will leave them alone after a while, I don’t know. “But we’re talking about a piece of art that I created, and that’s something I feel is important. I think everybody should feel that way.”

And now, Satriani’s team will ask a jury to decide. 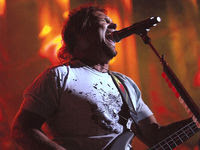 Check out this cool audio interview at Music Radar with bass player Michael Anthony about Van Halen and Chickenfoot his new band with Sammy Hagar, Joe Satriani and Chad Smith. Normally kinda reserved in interviews, Mike’s not shy about his opinions on this one.

The interview is conducted by former Guitar World editor Joe Bosso, one of my little journalistic heroes.
Here’s the intro from Music Radar. CLICK HERE to download the interview.

“But that doesn’t mean a ‘sideman’ isn’t vital,” he stresses. “I’m the kind of guy who has your back. When you want to go off and solo for ten minutes, I keep that groove going. It’s an important job.”

Since he first came to the public’s attention in 1978 on Van Halen’s revolutionary debut album, Michael Anthony has done his job better than anyone. Throughout the ’70s, ’80s and into the ’90s, he helped lay the foundation for the Van Halen sound, providing massive yet nimble bass parts over which Eddie Van Halen could fly. “Incredible times,” Anthony remembers. “Despite all the bullshit that went down in that band, I’m proud of the music we made, and always will be.”

Changing lead singers – David Lee Roth, Sammy Hagar and, for a minute or two, Gary Cherone – made the Van Halen experience “something of a mind game from time to time,” says Anthony. “As soon as we had a strong identity, we had to change.” And Eddie Van Halen’s substance abuse problems didn’t help matters. “I don’t want to talk smack on anyone,” says Anthony, “but there were times that were, uh, difficult.”

After a bittersweet ‘Van Hagar’ reunion in 2004, Anthony assumed the band was finished for good. So he was more than a little surprised when Van Halen announced they were hitting the road early last year with original lead singer David Lee Roth – and Eddie’s son Wolfgang on bass.

“It was a blow,” says Anthony. “I would have loved to have been a part of it. But at my age, you learn to roll with the punches. And you find that better things lay ahead.”

Such as Chickenfoot, the supergroup he’s formed with fellow Van Halen survivor Hagar, guitarist Joe Satriani and Red Hot Chili Peppers drummer Chad Smith. (If you don’t know about this band yet, check out Related Links and catch up.)

“Chickenfoot is phenomenal,” the bassist enthuses. “I can’t believe the music we’re making. And wait till you hear the blazing lead guitar Joe Satriani is playing. The guy’s a monster.”

In the podcast, Anthony talks candidly about his Van Halen years, times both good and crushingly bad. “A lot of these things I’ve never said before,” he reveals. “I’m kind of a ‘let it go’ kind of guy.” Plus, he raves about his new band, who aim to have an album out next spring. “We’re gonna rock people’s worlds,” he says. “Just when everybody says nobody makes music like this anymore, here we come.”