PRESS RELEASE: During the summer of 2013, guitar legend John McLaughlin and his trailblazing band The 4th Dimension – Gary Husband on keyboards and drums, Etienne Mbappe on bass, and Ranjit Barot on drums and vocals – a rare tour across America. On June 22nd they performed at the Berklee College of Music in Boston. This extraordinary concert was recorded and is now being released as McLaughlin’s latest work, The Boston Record. When asked to describe The Boston Record, McLaughlin said, “From time to time, a live record is made that has everything: great collective playing, a terrific audience, fantastic recorded sound, and a wonderful atmosphere. In the new recording of our concert you’ll find all of the above. I’m really happy about this recording.” END_OF_DOCUMENT_TOKEN_TO_BE_REPLACED

There’s a handful of guitar players who changed the way the instrument is played, and with it the course of music itself. Jimi Hendrix and Eddie Van Halen spring rapidly to mind. But for those who seek a deeper path, there’s John McLaughlin. The soft-spoken English jazz fusion pioneer has worked with Miles Davis, Carlos Santana, Jaco Pastorius, Tony Williams and Al Di Meola, just to name a handful. After decades of friendship and musical collaboration with pianist Chick Corea, McLaughlin and Corea have formed the Five Peace Band, a jazz rock fusion supergroup who are heading to Australia for a series of shows groundbreaking shows in February.

Scoring this interview was a touch of serendipity: A few months ago I marched into a CD store and marched out with a stack of jazz fusion CDs, and the most played of those since then has been Mahavishnu Orchestra’s ‘Birds of Fire,’ a landmark of the genre released in 1973. I confess my newness to McLaughlin. “Oh you’re a guitar player?” Yeah! “Great! Well Birds of Fire, that was about 35 years ago I think, wasn’t it? Well why not! You have to start somewhere! So you were involved in another kind of music or another style of playing?” I tell him I’ve been into the blues since I was really young, and then I discovered heavy metal, and now I’ve hit 30 and I kinda feel like I need to look elsewhere, expand my horizons beyond pointy guitars, demons, and all that other cool stuff that comes with metal. “Well you’ll never go wrong with the blues, that’s for sure. I started off with piano until the age of 11, but the guitar came into my hands simultaneously being exposed to the Mississippi Delta blues, which itself was a revelation. It marked me for life. Are you into playing jazz now, or jazz fusion?” I’m getting into fusion, yeah. “Well you’ll find that the blues is very much part of that also. You take the blues out of jazz and you don’t have much jazz left, you know what I mean?”

After some mutual geeking-out about the virtues of the blues, I figure I’d better ask about the Five Peace Band coming down to Australia. “Are you aware of Chick Corea’s music? Coming up in January Chick and I will be celebrating our 40th anniversary of friendship and musical collaboration. We actually met on the recording ‘In A Silent Way,’ which is a Miles Davis recording. Chick was in Miles’s group and I’d just arrived in New York, and Miles had me on the date, and that’s where we met. Although I knew Chick’s music already by 1967 when I heard a recording of him with Montego Joe. I was already a fan of Chick. He’s just one of the greatest musicians of our era. Anyway, we’ve collaborated on a lot of different things over the years. It’s a lifetime! We’ve been friends longer than you’ve been alive! But this is the first time we’ve had a group together.”

But far from being ‘McLaughlin, Corea and friends,’ the Five Peace Band is filled out by some quite respected named. “In the group we have another Miles Davis musician, Kenny Garrett, alto sax,” McLaighlin enthuses. “Great player, wonderful player. Christian McBride, who has gotta be number one or number two on bass today, he’s just outstanding. And we had Vinnie Colaiuta for the first five weeks – we just finished a five week tour of Europe – but I think we’ll be in Australia with Brian Blade, who’s one of the new, great young drummers of our era, so this is going to be very exciting, because Brian and I have never played together. But I’m really looking forward to it. He’s already got a reputation as an amazing player. And Chick and I, of course, we’ve got this connection going back so many years, and so many memories. And not only that, we were both very much, in a way, at the forefront of this fusion movement that happened in the early 70s, because in 1971 I formed Mahavishnu Orchestra, and I think it was just six or seven months later, Chick formed Return To Forever, and these two groups were pivotal in a way, in the fusion movement that began in the early 70s. They were probably the most well-known groups at that time. So we have a lot of music, a lot of history – mutual history, combined history. But strangely enough this is the first time we’ve had a band together. What we’ve done over the years is played many times in duo together, piano and guitar. And this is something that we really love to do, and we will certainly do it at some point during the concert that you’ll see in Australia. We do it every night at some point, we’ll just get together, just the two of us on stage. It’s very special, it’s really something. We have a very strong complicity, in a way. It’s just such a joy with this band. They’re such great musicians and great human beings too.”

I’m very curious about is McLaughlin’s personal approach to improvisation, obviously a huge part of jazz rock fusion. “In improvisation, if you’re thinking, you’re not playing. And if you’re playing, you’re not thinking. In true improvisation you have to learn a lot of things. You have to learn rhythm, melody, harmony, phrases. It’s like learning a language. You learn some words, then you put a couple together and you make a little phrase, then you learn some more words, and then you start improvising, you change the phrase, you add this word. And it’s the same in music. You need to start developing a vocabulary of phrases that correspond to the way you feel. And the other thing that happens in music is that every day is different. We’re changing constantly, and I’m different today than I was yesterday, and I hear a little bit differently. Now, one day to another’s not much, but over six months, you’ll really notice it. This is why I continue to work, because my phrasing that I hear in my imagination, which is behind my musical playing, is also evolving. So I have to work just to keep up to date with my own imagination, if you know what I mean.”

The conversation shifts to amplification. “I’ve been using (IK Multimedia’s) Amplitube 2, but not in the last year,” John says. “I went on tour last year with a new band, an electric band, and I was using a Roland Cube 60, which is a nice little amp, but at the end of last year I started using one of these Mesa Boogie tube preamps – very nice, very nice. I’ve known Mesa Boogie amplifiers since around 1973. They’re great amps, and he made these tube preamps that are really good. With Shakti I was using a laptop, because I was using synth guitar also, and with a laptop it’s great, to have something like Amplitube as a virtual amp that I can use simultaneously with some software synths. But with the electric band I’m not playing any synths, I’m just playing electric guitar, and it’s the same with the Five Peace Band, I’m just playing electric guitar.

The synth input to the laptop was achieved via a Godin guitar. “It’s a really great guitar,” John says. “One of the reasons I went with Godin guitars in the first place is it has a great MIDI pickup. Once you see ‘This Is The Way I Do It,’ you’re going to see a score that moves in sync to all the audio. To do this was quite a tricky problem, and what I found was that the Godin guitar had the best MIDI output pickup available, and it has a great audio sound too. So I recorded MIDI and audio simultaneously, and I was able to construct a score which was then exported, cleaned up and then reimported into the mainframe for video rendering. It had never been done before, so we had no reference. It was a tricky problem, but it actually came out very well.” 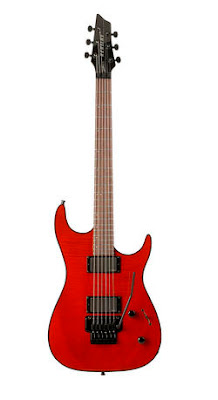 For quite a while I’ve felt that Godin guitars are one of the best kept secrets in the guitar world. It seems they’ve always been in music stores, but with the exception of John McLaughlin and Steve Stevens, you never really see them in the hands of too many players.

I think that might change in 2009 with the expansion of the company’s Redline range. Previously only available as a fixed bridge model with a single EMG 81 humbucker in the form of the Redline 1, the line will be beefed up with three new models, the Redline 2, 3 and HB.

The Redline 3 is also loaded with active EMG humbuckers and is available with a maple or rosewood 22-fret fingerboard and a Floyd Rose tremolo bridge.

All of these models will be available in various colours and flame tops.

Visually, the Redline series kinda reminds me of ESP’s Jon Donais (Shadows Fall) models, and that’s good news for players who like the general vibe of Donais’ ESPs, but don’t want to play a signature guitar, and might want the option of a Floyd Rose.

I just found out that tomorrow afternoon I’m off to interview John McLaughlin for Mixdown magazine. Got any questions you’d like me to ask him? Leave them here as a comment or email iheartguitarblog@gmail.com and I’ll do my best!