Wow, this is surprising. For years pretty much everyone has wanted a Matt Bellamy guitar but the cost of an authentic Manson like he uses it pretty dang high. So Matt and Manson have teamed up with Cort to launch the official Manson Matthew Bellamy Signature Guitar, based on the official MB1-S series and featuring a bunch of key specs such as pickups designed by the Manson Guitar Works team, discrete kill button, and that killer not-quite-Tele-like shape. Here’s the official press release:

END_OF_DOCUMENT_TOKEN_TO_BE_REPLACED 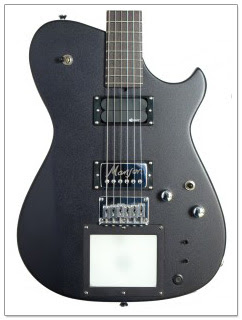 Finally! Manson Guitars is producing an official signature model for Matt Bellamy of Muse, and in terms of tricked-outedness this one is giving the Parker Adrian Belew model a run for its money.

The Manson MB-1 Standard is made in the UK. It includes a Manson-designed bridge humbucker, a Fernandes Sustainer in the neck, and a fixed bridge. Most interesting of all though is the optional MIDI control screen. Map it to your effects, your computer, whatever you like. Use it to activate whammy pitch effects, change the speed of modulation effects, whack it for rhythmic stutters, whatever you like. Awesome. Delivery is expected to start from summer 2009 and orders will be fulfilled on a first come, first served basis. There’s a minimum holding deposit of (gulp) £1000. Base price is £3299

Check out Guitar Noize’s post about this guitar too.

This is another in my series of ‘How To Sound Like…’ columns from Mixdown Magazine. These columns are fairly general, to give tips on how to get a particular sound without necessarily buying the same gear as a particular player or band.

Muse’s Matt Bellamy is a renowned gadget tweaker, and his custom Manson guitars are filled with all sorts of goodies, including Z Vex Fuzz Factory pedals, MIDI controllers for Digitech Whammy Pedals, Ibanez Edge Pro floating bridges, and all sorts of other mischievous machines of mayhem. Yet despite all the exclusive gadgetry, there are ways of copping the essence of Bellamy’s tone without buying up a whole guitar store effects department and shoehorning it into a boutique custom made axe.

One way of getting Matt’s sound is to use several cascading medium gain stages, rather than one ultra-distorted sound from just an amp or just a pedal. Try plugging an overdrive or distortion pedal into a valve amp, and set the gain or drive controls on each to around halfway. If your pedal has a single tone control, see what happens when you sweep it from minimum to maximum setting. You may hear a sound which is almost like a phaser, as the pedal’s tone clashes with that of the amp, especially towards the higher end of the tone control’s travel. Sometimes this can yield some really cool new sounds, but they may be a bit too grating for a full song, and are best used for effect. Back down around 9 o’clock or so on the pedal’s tone control, there often lurks a sweep spot which enhances midrange while taming treble ever so slightly, and makes the overall sound more complex, thick and reactive. You might even like to try adding a compressor or using several distortion or overdrive pedals at once, all at lower gain settings.

Bellamy is not shy about cranking the midrange to emphasise a solo or melodic section, such as that snaking melody in “Plug In Baby.” One way of doing this is to use a graphic or parametric equalizer. Another, far cheaper way is to simply turn your guitar’s tone knob all the way down. With a clean sound, this will usually just muffle the tone. With a distorted one, you’ll get a round ‘honk’ which almost sounds like a wah wah pedal left in a stationary position. The effect is even more powerful if you’re using a Strat-style guitar with a separate tone control for the middle pickup. Combining the wide open bridge pickup with a tone-tweaked middle pickup retains the high end and pick attack while still giving you that bold, vocal midrange quality, and can make it sound like the guitar is feeding back, but completely controllable.

As for the whammy pedal freakouts, you can either fork out for a Whammy pedal, or you can simulate the effect by wearing a ring or one of those tiny half-sized slides on one of your picking hand fingers, and whizzing it up and down the strings. With a little patience you’ll be able to play melodies and accurately drop down on pitches which would be otherwise out of the range of a regular guitar.