Guitarist Mike Stone has quit Queensryche, a few weeks after it was revealed Michael Wilton played all the guitar parts on the band’s forthcoming album, ‘American Soldier.’

Mike Stone has decided he will not be touring with Queensryche this spring. We will miss him. He is a wonderful player and has contributed to our lives musically and spiritually. We wish him the best and hope to see him succeed in everything he chooses to participate in. He adds this statement:

“After much consideration, I will not be joining Queensryche on the 2009 American Soldier Tour. I feel now is the time to focus on other musical endeavors, including my new band Speed X with Nick Catanese of Black Label Society. I would like to thank all of the Queensryche fans around the world for being nothing less than amazing to me during my time with the band. You have treated me like gold, and I will never forget it. It has been an honor to be a part of the Queensryche family, and I wish Geoff, Michael, Scott and Eddie nothing but the very best.” – Mike Stone

I saw Stone with Queensryche a few years ago (on my birthday) and he brought a really powerful energy to the band’s live sound. Having said that, I’d like to reiterate my offer of taking his place in Queensryche. Hehe. 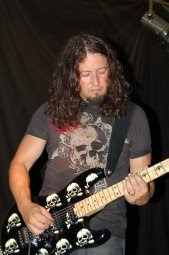 Queensryche guitarist Michael Wilton has revealed on his official website that he is the sole guitarist on the band’s forthcoming album, American Soldier.

Under the username Hellboy, Wilton said: “Hello you all. Sorry I have not logged in for awhile but I have been slammed with making the deadline for the new Queensryche opus. I recorded all the guitars this time so it should sound more like the original Ryche.”

This puts a big question mark over the head of co-guitarist Mike Stone, who has played with the band since the tour for their ‘Tribe’ album, and was on the last two, Operation Mindcrime II and Take Cover. Is Stone still playing with Queensryche? He was never an official member of the band, but he was their regular second guitarist for many years on stage and in the studio.

So with this in mind, I’d like to advise Wilton that as long as I can take Mrs I Heart Guitar and our adorable 2-year-old on the road with us and we can live out our own Zippy The Pinhead strip as we visit roadside attractions between towns, I would be happy to step in as Queensryche’s second guitarist. Email me, dude.

And CLICK HERE to get a 25-song, 100% free trial subscription to eMusic, where I bought the killer album by Wilton’s other band, Soulbender, last week. I’ve been looking for this album forever and it totally crushes – just check out the evil Sabbath-ish riff in the first song.