PRESS RELEASE: Mascot Label Group and Flying Colors have announced a September 29 release date in Australia for the band’s SECOND NATURE album via the Music Theories label, part of the Mascot Label Group. The critics were united in acknowledging the eponymously titled debut album from Flying Colors as among the most fascinating releases of 2012. The UK’s Classic Rock magazine hailed the band’s debut as “fearless”, praising its “Journey- sized choruses” and referencing artists as diverse as The Beatles, the Red Hot Chili Peppers, The Doors, Muse and even Frank Sinatra. END_OF_DOCUMENT_TOKEN_TO_BE_REPLACED

, a box of dog treats fortified with these essential vitamins: END_OF_DOCUMENT_TOKEN_TO_BE_REPLACED

The latest in the Metal Masters clinic series has been announced, with a huge line-up of legends from some of the biggest names in thrash and prog metal. And although it occurs during NAMM Week (and NAMM is industry-only which presents certain challenges), Metal Masters is open to everyone. It’s at the House Of Blues in Anaheim, California, in Downtown Disney and right near the Anaheim Convention Centre where NAMM is held. So if you’re heading there for NAMM anyway, this seems like a great way to kick off the week. And if you’re not NAMMing but you’re in California, go go go go go! And if you’re not gonna be there, it’ll be streamed online! Here’s the press release.  END_OF_DOCUMENT_TOKEN_TO_BE_REPLACED

Check out the video below for Elevate, the first single by The Winery Dogs. That’s the new band featuring Richie Kotzen, Mike Portnoy and Billy Sheehan. The lads are planning a few shows in Japan in July, with more dates to be announced shortly. Here’s hoping they make it down here to Australia to make up for the cancelled Extreme/Richie Kotzen tour which was to have taken place right now.

Their self-titled debut album is out on May 15 in Japan via Victor Entertainment, which means an international release can’t be far off. END_OF_DOCUMENT_TOKEN_TO_BE_REPLACED

When Mike Portnoy quit Dream Theater a year ago, it could have been a disaster for the band. Instead they went into audition mode, recruiting former Extreme/Steve Vai drummer Mike Mangini to record A Dramatic Turn Of Events. The new album is classic Dream Theater, with odd time signatures, clever arrangements, genre-hopping, long instrumental sections and plenty of shred. Mangini proves he’s the perfect man for the job, and the entire band sounds energised and inspired by the new, more democratic approach to composition. It’s their most varied and creative work since 1999’s Scenes From A Memory.

The first impression I had of this album was “This reminds me of something. What is it? Oh! Dream Theater!” It really brings back the things I really loved about the Images & Words era.

Cool! We were definitely conscious to look at our goals for the new album and really talk to each other beforehand. I had a lot of conversations with Jordan (Rudess, keys) about the compositional direction, and trying to hone in on the elements that make the band special in our eyes. We had a conversation with James (LaBrie) about where we wanted to take the vocals melodically, and conversations with John Myung (bass) not only about the album but each song. We had a very focused general outlook of the entire writing process. And not only that but as a producer what it was going to sound like when it was all said and done. So that probably helped keep it in that direction.

END_OF_DOCUMENT_TOKEN_TO_BE_REPLACED 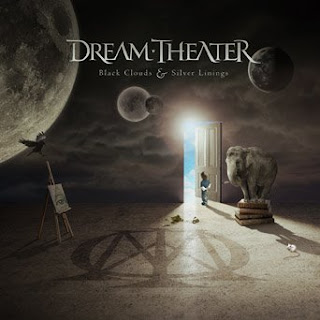 Fellow prog geeks rejoice! The new Dream Theater album is called ‘Black Clouds & Silver Linings’ and it will be released on June 23 on Roadrunner Records.

In addition to the standard-version CD, there will also be a vinyl LP and a three-disc, special-edition CD that will include the full album, a CD of instrumental mixes of the album and a CD of six cover songs, the titles of which will be revealed at a later date.

Six weeks prior to the June 23 street date, Roadrunner will release one cover song per week through digital retailers. A video for the first single, ‘A Rite of Passage,’ will be shot in late March.

‘Black Clouds & Silver Linings’ was produced by drummer Mike Portnoy and guitarist John Petrucci, and it was mixed by Paul Northfield.

The track listing is:

Here’s a 1-minute teaser from the Eddie Trunk show. 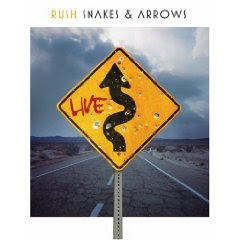 Rush has just released their Snakes & Arrows DVD, and fans are speculating that clues given by singer/bass player Geddy Lee in an interview with Billboard magazine (read about it here on the Rush Is A Band blog) are a hint that the band may be reaching the end of its life as a touring entity.

According to the interview,

… Lee says “Snakes & Arrows Live” will have to hold Rush fans over for a while. The trio is currently “on a break” and “a little burnt out right now,” though he has every confidence there will be another Rush album in the future.
“I think we’re gonna stay quiet for awhile and then start writing — when we’re going to start writing I can’t say just yet,” Lee notes. “It may be in the fall, maybe the spring, maybe the following spring. But eventually we’ll start writing some songs and recording them, and hopefully that will be followed up by another tour down the road a couple years from now.”

Dream Theater drummer Mike Portnoy has seemingly backed up reports Rush may play one final tour in 2011. Portnoy mentions on his forum that he was at a taping of Eddie Trunk’s ‘The Metal Show’ on VH1 Classic. Mike writes:

I was called once again to bless the audience with my presence at a taping of this new show that will be on VH-1 Classic in Nov/Dec.

Today they shot two shows and the guests on the first show were Geddy and Alex. It was pretty cool, as we were waiting outside a limo pulled up and they both walked out. I think I may have said, “Holy Shit it Geddy!” and some guy behind me thought Alex was Mr. Peart which caused a series of frantic texts and calls to friends.

They were very reserved on the show although they did mention that there would be “one more tour”. Alex made a funny quip about how “there’s drugs backstage… like aspirin, cholesterol medicine, etc.” Geddy mentioned how between sets he “checks on baseball scores”.
It was pretty cool, so I thought I’d share.