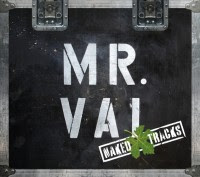 Arguably the most amazing guitarist to walk the face of the earth, Steve Vai is set to release his groundbreaking new DVD IN September but until then check out this innovative piece of Vai! Get ready to get naked! ‘Naked Tracks’ is housed in a special limited edition digipak box set. This series of play-along CDs is designed to help create an atmosphere of focus so you can shred yourself into a personally-induced inspirational nirvana.

Previously only sold on www.vai.com and iTunes. Steve Vai is one of the most influential guitarists of our time. An excellent practice tool for any guitarist. A must have for the Steve Vai collector. World tour late 2009-2010.

Great news huh? I bought them from an online store a while ago and I …hey wait a minute… you catch that last bit?

Let’s look at that again:

Anyway, back to the Naked Tracks: Here’s Jon from Guitar Noize rocking his cover of Answers.

Those who have been waiting patiently for the physical release of Steve Vai’s ‘Naked Tracks’ can now head on over to the Vai.com store. The CDs will be available from February 2.

These recordings are Steve Vai’s actual studio tracks, with the lead guitar removed so you can play along in your own little Vai fantasy world. I couldn’t wait for the physical release so I bought a few of them from eMusic (Fire Garden/Ultra Zone and Passion & Warfare) but the actual CD set looks very cool, and the completist in me kinda wants that too.