Vox’s Night Train series is hugely popular and rather modern-looking, with an exterior that looks like something that liquid metal Terminator guy would play through if he was into little lunchbox amps and mini combos. It’s a very distinctive look but some players feel that Vox already has a distinctive look, and wouldn’t it be nice to have a Night Train that looks like a Vox? If this point of view describes you, read on, my friend, read on. END_OF_DOCUMENT_TOKEN_TO_BE_REPLACED 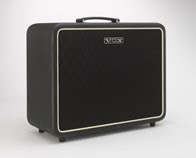 Back when the Vox Night Train amp head was released, I wrote a little news story about it and even though it was just a press release, it was one of I Heart Guitar’s most popular articles, which goes to show how much interest there is in this cool little amp. Now Vox has released the Night Train V112NT cabinet to maintain the visual vibe of the head. Available from September with an RRP of just $249.99.

Featuring an open back and a single 12″ authentic “Greenback” Celestion 16 Ohm speaker, the V112NT is distinguished by its rounded corners, unique black-on-black fret cloth, and elegant white trim. The look was designed to complement the Night Train’s mirrored chrome finish. As with the Night Train NT15 head, the V112NT is meant for musicians on the go, weighing less than 25 lbs and equipped with a sturdy carrying handle.

For more information, visit their web site at http://www.voxamps.co.uk/.