Did you manage to see Nine Inch Nails on their final victory lap before they were retired as a live band (at least in the current form – I’m pretty sure we’ll see them again some day, eventually, and when that day comes everyone will be all like, ‘pfft, what a rip. I paid to see their last tour because it was their last tour, and now they’re touring again? WTF, NIN, WTF? But I digress). Well NIN may be no more but thanks to Trent Reznor’s decision to bail out of the touring game for the time being, there are a hell of a lot of cool NIN-owned/used guitars being sold on eBay at the moment by the band. Check out this ESP Eclipse with artwork from The Fragile. 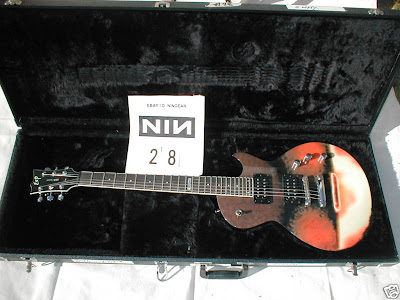 And what about this killer 1980 Gibson E-2 Explorer, complete with chunky-ass fine tuner tailpiece? 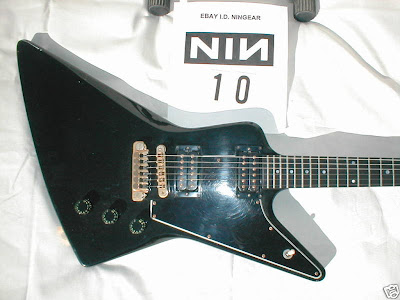 Maybe you need a cool NIN-owned Jackson Soloist in your life? After all, Trent used Jacksons pretty extensively in the early 90s. 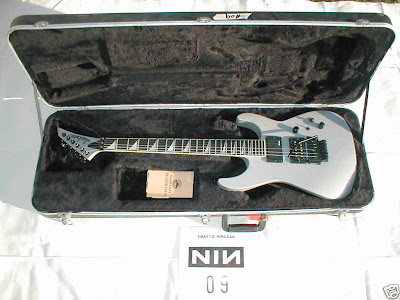 Speaking of Jacksons, Rhoads, anyone? 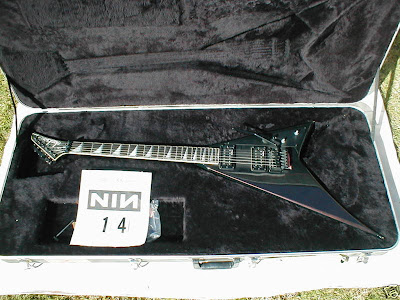 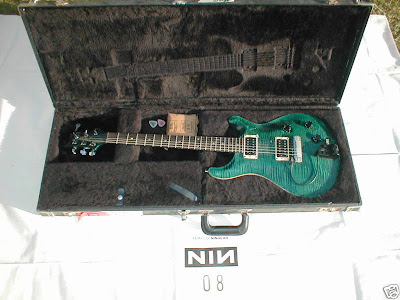 Or perhaps you’re more into the Les Pauls the band played and destroyed.

CLICK HERE to see these items and other NIN instruments being auctioned on eBay.

NIN Access, the highly-anticipated Apple iPhone application, has gone live, although it seems to be crashing my phone so far… not sure what’s going on there. Some other users on Twitter are reporting the same thing but it’s working fine for others.

UPDATE: I was able to get around the crashing problem by changing my time zone to Los Angeles. Weird! There will be an update of the app next week so I’m sure they’ll address this problem soon. I guess it confused the app that Australia is 16 hours or so ahead, and they haven’t quite developed the technology to beam software into the future.
There’s an interesting article about the app at Wired and you can download the app by going to access.nin.com/download.
CLICK HERE to see Apple iPhones on eBay. 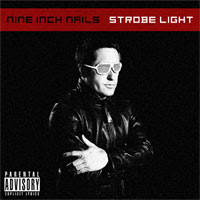 To download NIN’s new full-length album Strobe Light, PRODUCED BY TIMBALAND, enter a valid email address in the fields below. A download link will be sent to you immediately. Your credit card will be charged $18.98 plus a $10 digital delivery convenience fee. Your files will arrive as windows media files playable on quite a few players with your name embedded all over them just in case you lose them. You will also receive an exclusive photo and a free email account with our partner Google’s Gmail service.

Your email will be kept confidential and will not be used for spam, unless we can make some money selling it.

In anticipation of the NIN/JA (Nine Inch Nails/Jane’s Addiction, geddit?) tour, the three bands have each contributed two tracks to a free downloadable EP. Along with two rather live-sounding NIN songs (‘Not So Pretty Now’ and ‘Non-Entity’), there are re-recorded, Trent Reznor-produced versions of early Jane’s tracks ‘Whores’ and ‘Chip Away.’ Street Sweeper is Tom Morello’s new band, combining rap and rock in a more straightforward way than Rage Against The Machine.

Bedroom Philosopher: Songs from the 86 Tram.

While not necessarily the kind of high octane guitar geekery I Heart Guitar readers are used to seeing covered in these pages, I encourage everyone in Melbourne to check out The Bedroom Philosopher – Songs From The 86 Tram, part of this year’s Melbourne International Comedy Festival. I used to go to the same uni as this dude and we lived over the road from each other in Canberra for a while. If you can’t make it to Melbourne, look for his new album, Brown & Orange on iTunes.

First of all, thanks to I Heart Guitar reader richaod for his comment on THIS STORY about Jane’s Addiction and Trent Reznor working together. Trent has updated the NIN website with the following:

“Towards the beginning of my career in NINE INCH NAILS, our biggest break came in the form of an invitation to perform a series of shows with JANE’S ADDICTION. These performances essentially created and defined the term ‘alternative’ rock in the U.S., created an ongoing festival franchise that is still thriving (Lollapalooza), set the stage for NIRVANA to shift popular taste a few months later, and were really fucking FUN to play and attend — truly the best times I’ve had. The shows were epic. So epic, they propelled NIN to the ‘next level’ (whatever that means), but caused JANE’S to implode. The band broke up at the end of that tour.

“Fast forward to the present. Corporate rock STILL sucks. A friend tells me they saw the original JANE’S lineup play a tiny show in L.A. that was unbelievable. I break out my JANE’S records and am amazed by how vital they sound. These guys were the real deal and in this current climate mostly dominated by poseurs and pussies, it was refreshing to hear something that sounded dangerous, volatile, beautiful and SINCERE.

“E-mails were sent, phone calls were made, dinner was arranged, ideas were discussed and the next thing I know we’re in the studio experimenting. We laugh, we get to know each other, we cry, we yell, we almost quit, we record LOTS of guitar solos, we discuss, we actually begin to all communicate, we yell some more, we become FRIENDS, we laugh again and we do some great things. I get to see first-hand why they broke up all those years ago but I also get the chance to see four distinct personalities that become an INCREDIBLE band when they’re in the same room.

“In NIN world, 2009 marks the 20th anniversary of our first releases. I’ve been thinking for some time now it’s time to make NIN disappear for a while. Last year’s ‘Lights in the Sky’ tour was something I’m quite proud of and seems like the culmination of what I could pull off in terms of an elaborate production. It was also quite difficult to pull off technically and physically night after night and left us all a bit dazed. After some thought, we decided to book a last run of shows across the globe this year. The approach to these shows is quite different from last year — much more raw, spontaneous and less scripted. Fun for us and a different way for you to see us and wave goodbye. I reached out to JANE’S to see if they’d want to join us across the U.S. and we all felt it could be a great thing. Will it work? Will it resonate in the marketplace? Who knows. Is there big record label marketing dollars to convince you to attend? Nope. Does it feel right to us and does it seem like it will be fun for us and you? Yes it does.

“Look for tour dates soon and I hope to see you out there.”

Wow. So, NIN to take a break after a possible joint tour with Jane’s Addiction? Very interesting. I’ve seen both bands live (and unfortunately I don’t think I’ll get a chance to see NIN when they play in Melbourne next week) but I’d love to see them together. Hopefully they’ll bring the tour to Australia, or hopefully I’ll suddenly get rich and be able to fly to the US to catch it. Hehe.

The first week of December is typically sparse on new releases but is a big one for reissues ahead of Christmas, so this week there are re-releases of the entire back catalogues of Bon Jovi, Guns N’ Roses

Here’s a Christmas present for the headbanger in your life. Specially packaged gift set of solo albums by Nevermore’s Warrel Dane and Jeff Loomis (who is a very Jason Becker-inspired guitarist with his own signature Schecter 7-string). Check out that skull-and-Flying-V ribbon on the packaging. There are various other 2-CD sets in this Century Media series, including Strapping Young Lad’s City and Heavy As A Real Heavy thing

One of the surprise hits of the year (at least to me: when I saw them live there was only a small crowd, then five years later, BOOM!), this special UK-only two disc (CD + PAL/Region 0 DVD) tour edition of their 2008 album includes a bonus five track live DVD that features Use Somebody, On Call, Sex On Fire, Crawl and Manhattan. The version also includes the original UK only artwork.

Best Of Chess: Original Versions Of Songs in Cadillac Records

The 2008 movie ‘Cadillac Records’ is the story of Chess Records. The soundtrack album

Blu-Ray version of this classic live concert film, complete with freaky fantasy sequences, Jimmy Page’s heroic double-neck Gibson-wrangling, and the understated genius of John Paul Jones. The playing and cinematography are notoriously flawed, and Zep sure could go on and on in concert, but this is an important concert film if only because it’s the only full show the mighty Zep ever released.

This 6 disc set covers KISS’s simultaneous solo albums, several full concerts including a 1980 show from Sydney, Australia, a 1990 show from Detroit, Michigan, the Vinnie Vincent years, the abandonment of make-up, and, oh my god, the made-for-TV movie ‘Kiss Meets The Phantom Of The Park’ in its entirety. Check out the other volumes in the series too.

This brilliant documentary by a metal-loving anthropologist will be of immense interest to metal fans but is also entertaining enough for non-headbangers, as it traces the development of metal as a parallel to social, geographic and economic factors.

Q*Ball is an eclectic artist who combines electronica, rock, and pop melodies with a sense of sonic experimentation and musical colour evocative of Berlin era Bowie. His third album, This Is Serious Business, adds live drums, acoustic guitars and grand pianos, and welcomes back the guitar and co-production talents of Bumblefoot, guitarist for Guns N Roses but also an extraordinarily talented solo artist in his own right.
Unlike some electronica, the songwriting of This Is Serious Business is strong enough to stand up to any treatment – these are songs that would sound great strummed around the proverbial campfire or raging out of a rock band. The instrumentation adds a sophistication and groove that make the album feel high-tech yet timeless, and the clean, strong vocals show a calm sense of restraint which keeps the delivery from pinning the album to a specific time in musical history – this doesn’t sound like a naughties or nineties or eighties album.
My favourite track is ‘She Drives Me Crazy,’ a power pop track with powerful drums and an almost Lloyd Cole vocal delivery. It’s the closest thing on the album to an arena anthem yet would also sound great being blasted out in an indie club.
‘Pez Dispenser’ has an almost Nine Inch Nails feel, and ‘Baked On The Freeway’ reminds me of Butthole Surfers meets Earthling-era-Bowie.
This Is Serious Business is a very engaging album and the Bumblefoot contributions will be of special interest to us guitar geeks.