The Crimson ProjeKCt is a King Crimson offshoot featuring three current members of that historic, nay, iconic band – Adrian Belew, Tony Levin and Pat Mastelotto – along with Julie Slick, Tobias Ralph and Markus Reuter. And a typical Crimson ProjeCKt concert is a marathon of musical might which shifts through many moods and configurations. Belew explains: “What happens is this: Stick Men (Levin, Mastelotto and Reuter) play a set of their music (which includes a Crimson track or two), then the Power Trio (Belew, Slick, Ralph) plays a set of my music (which also includes a Crimson track), then Tony and Pat and I play a Crimson song (as yet another trio), and then comes the big finale: both trios play more than an hours-worth of Crimson music as a double trio! It’s a helluva show!” And the group is coming to Australia and New Zealand to spread their particular brand of musical majesty in June and July, with shows in Auckland, Melbourne, Sydney, Brisbane and Fremantle. END_OF_DOCUMENT_TOKEN_TO_BE_REPLACED

Few guitarists are as endlessly creative as Living Colour’s Vernon Reid. One of those rare individuals who seems to be able to summon inspiration and individuality to them on request, Vernon’s playing ranges from the subtle and traditional to the sublimely outrageous. Living Colour are in Australia for the Soundwave festival and a few of their own side shows with Alter Bridge. I Heart Guitar caught up with Vernon recently to talk about it.

Correct me if I’m wrong but did you guys book this through Twitter? It kinda looks like that’s how it happened! I saw the Living Colour Twitter account tweeting to Soundwave that you’d like to do the festival, and a few weeks later it was announced.

I guess that’s the power of social media!  END_OF_DOCUMENT_TOKEN_TO_BE_REPLACED

For a while there it looked like Aerosmith were done. Steven Tyler had fallen off the wagon (and subsequently the stage), and at some point he was in consideration for a proposed Led Zeppelin tour in the absence of an unenthusiastic Robert Plant. Along the way bass player Tom Hamilton was diagnosed with throat and tongue cancer (he recovered but the cancer returned last year, and after treatment he’s recovering well). And of course Tyler went off and took a job as a judge on American Idol too. When the band finally reconvened and hit the studio, the question was “Which Aerosmith will be making an album? The 70s bluesy rockers? The 80s/90s hard rock superstars? The FM smash balladeers?” It turns out the answer was “All of them.” Music From Another Dimension! manages to have something to appeal to fans of all three of the band’s main eras, and with 15 tracks on the standard edition it’s pretty much a case of “If you don’t like the ballads, there’s plenty of the other stuff.” Whether intentional or not, Aerosmith seems to have found a way to please everyone.

Hi! Have you had a chance to listen to the record?

Yeah! I like that there’s three Aerosmiths here – the 70s feel, the 80s/90s stuff and the ballads. Something for everyone who likes something about Aerosmith.

Yeah, I noticed that’s how it came out. Every era of our career is represented. I don’t think it was a conscious decision. We’ve learned that it’s so much about songs, and we’ve dipped into different styles throughout our career. What always comes back is it’s all about songs. We want to have really kickin’ drums and blasting guitars, and Steven singing amazing vocals. And I’m a musician so sometimes I’ll listen to music just for the bass player, but not that often. I really believe that the song is the thing.

END_OF_DOCUMENT_TOKEN_TO_BE_REPLACED

Finally, the Parker 7-string that I always thought should exist, does exist. Parker unveiled this beauty at NAMM, and in person it looked like a pretty well-hewn axe. The particular natural tone and attack of the Parker Fly is something I’ve always thought would translate particularly well to seven strings. Of course, at RRP $5,999 USD it won’t be cheap…

It has a mahogany body reinforced with carbon fiber glass epoxy with a Parker 7 string bridge, a Seymour-Duncan Distortion SH6N pickup in the neck position and a Seymour-Duncan Distortion TB6 in the bridge position. Oh and there are Ghost piezo saddles with a MIDI preamp. Available in dusty black, galaxy grey, and metallic red, all in gloss finish.

Here’s the fretless version from the NAMM floor. Scroll to the end to see a press shot of the fretted version.

The new Maxx Fly Bass represents the culmination of Parker’s finest work in a bass. Sacrificing nothing in terms of design and aesthetics, this bass is the ultimate in its class and is a powerhouse of features. It is a bass that a professional musician will turn to time and time again. It will be debuted at Winter NAMM 2012 and be available for $5999.99.

END_OF_DOCUMENT_TOKEN_TO_BE_REPLACED

It’s a big year for Living Colour fans, with the release of the new album The Chair In The Door on September 15 (more info here, or keep reading to see video of one of the tracks performed live) and the new Parker DF824VR Dragon Fly. Can’t wait to try this one out!

Here are excerpts from the press release:

The DF824VR is constructed of a poplar body, top and neck with a Parker Finger Joint set neck, and carbon composite fretboard. The DF824VR has a Floyd Rose original bridge, Grover tuners, EMG SAX neck and middle pickup and an EMG 81X bridge pickup. Available now in a violet pearl and black cherry finish with black hardware.

For more info, visit parkerguitars.com and Premier Guitar, and thanks to Guitar Noize for once again retweeting awesome news! Man, you’re on it today!

If you’re following Living Colour’s Vernon Reid on Twitter you have probably already seen this. If not, here’s prototype #1 of the Parker Vernon Reid Dragon Fly. 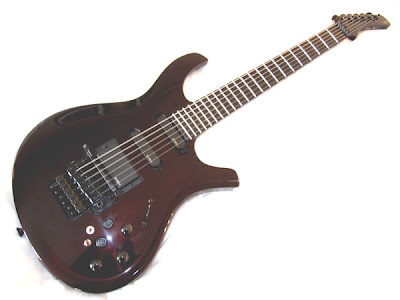 A few points of particular interest:

Looks like it’s shaping up to be a very versatile and innovative guitar. Can’t wait for further updates!

New Placebo album
Placebo will self-release a new album on June 6. According to undercover.com.au, the album was recorded with Tool producer David Bottril, and was mixed by Alan Moulder (Nine Inch Nails, Smashing Pumpkins). I went through a big Placebo phase back in the day, and they make great use of the awesome Fender Bass VI.
Source: Undercover.com.au.