Woo! Excuse me while I do the happydance over this extremely exciting news:

Australian audiences will be privileged to be in a position to be able to witness one of the most acclaimed artists in its genre when Queensrÿche graces our shores for only their second time. Conducting a world tour on the back of their latest blockbusting release, “American Soldier”, Queensrÿche has included Australia on its itinerary and will come down under to perform, what will be known as; Extended Suites: Rage For Order/American Soldier/Empire.

Which former Queensryche guitarist was involved in the production of American Soldier?
The answer, of course, is Kelly Gray. Max wins a copy of the album and a promotional patch.
There were 8 entries and everyone who entered provided the correct answer. The winner was selected at random via Random.org. There is a screengrab of the draw available if anybody would like to see it (I’ve blurred parts of some names for your privacy). Email me at iheartguitarblog@gmail.com if you would like me to send you the screengrab.
Thanks to everyone who entered. :)
CLICK HERE to read my review of American Soldier.
CLICK HERE to buy American Soldier from Amazon.com

CLICK HERE to read my review of American Soldier.

Don’t forget!!! I Heart Guitar is giving away one copy of Queensryche’s American Soldier album plus a Queensryche patch with similar artwork to the If I Were King single. To win, email iheartguitarblog@gmail.com with the answer to this question:

Which former Queensryche guitarist was involved in the production of American Soldier?
There’s been a great response so far but the more the merrier! The winner will be selected at random (provided you’ve given the correct answer!) on Friday April 10 via Random.org. Don’t worry, your email address won’t be used for any marketing purposes or mailing lists or anything like that.
CLICK HERE to read my review of American Soldier.
CLICK HERE to buy American Soldier from Amazon.com

I Heart Guitar is giving away one copy of Queensryche’s American Soldier album plus a Queensryche patch with similar artwork to the If I Were King single. To win, email iheartguitarblog@gmail.com with the answer to this question: which former Queensryche guitarist was involved in the production of American Soldier?

The winner will be selected at random (provided you’ve given the correct answer!) on Friday April 10. Don’t worry, your email address won’t be used for any marketing purposes or mailing lists or anything like that.
CLICK HERE to read my review of American Soldier.
CLICK HERE to buy American Soldier from Amazon.com 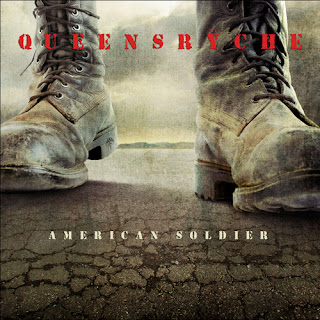 Every time a new Queensryche album is released, the wider rock/metal community asks “Is it as good as Operation: Mindcrime or Empire?” To me this is kind of a futile question: Queensryche have never made the same album twice, and even when they try, as with the recent Operation: Mindcrime II, the results still stand on their own. So there are a lot of things American Soldier is not. It’s not Empire, their 1990 hard rock classic. It’s not Operation: Mindcrime, their 1988 metallic concept masterpiece. It’s not Hear In The Now Frontier, which upon its release in the mid 90s was criticised as being a cynical attempt at appropriating a grunge sound (today it holds up quite well, I might add). But surprisingly, what American Soldier is, is an album which would slip in quite nicely between Empire’s heavier moments and the moody, dark vibe of Promised Land, which happens to be my favourite Queensryche album.

Inspired by a conversation with his father, singer Geoff Tate researched the album by interviewing veterans of various wars the US has been involved in, from World War II up to the current skirmish in Iraq and Afghanistan. The result is a thoroughly researched, painfully up-close look at the experience of war, spoken through Tate’s interpretations and through snippets of the actual interview recordings. Writing about war is certainly not new to hard rock or metal, but while we’re used to bands writing something Slayeresque about battle after maybe watching Saving Private Ryan, the music and delivery of American Soldier is much more personal: you’re hearing these stories from people who actually did it, from the soldiers who actually survived it. And that’s a pretty powerful thing, even for Queensryche who are used to making strong statements. 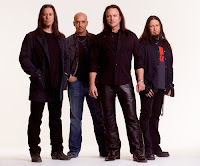 The Jason Slater-produced (with Kelly Gray) CD opens with ‘Sliver,’ which brings to mind elements of Promised Land. A snaking unison bass/guitar riff and a huge harmonised chorus appear quite early into the song, throwing the listener deep into the thick of the album’s overall vibe almost from the very beginning. It’s no doubt designed to introduce the listener to the album musically as well as thematically, and to reassure the listener that the medium (kickass rock) won’t be overshadowed by the message. In fact there’s a great push-pull between riff-based and chord-based songs on the album.

Track two, ‘Unafraid,’ is one of the album highlights for me, and a continuation of some of the musical concepts the band attempted on its Tribe album. There are a few riffs which may remind some listeners of Dream Theater, while sole guitarist Michael Wilton lets rip with one of his best solos since the Empire days. ‘Hundred Mile Stare’ is more chordal than riffy, and again sounds kinda like something from Tribe. It’s indicative of about half the music on the album, where the music hangs back a bit to serve the telling of the story.

Perhaps my favourite song on the album from a musical perspective is the crushing ‘A Dead Man’s Words,’ which really plays up the Promised Land comparisons. The seductive middle-eastern riffs and scales play in the background while Tate layers his vocals and even throws in a saxophone solo. Parts of this song may also remind some listeners of the band’s Seattle neighbours Alice In Chains.

By the way, check out the cool harmonized solo in ‘The Killer,’ a track which is not too far removed from ‘Flood,’ the opening track of Tate’s self-titled solo album. Wilton does a great job of shifting the emphasis between the high and low harmonies in this solo, recalling Queensryche’s earlier sound and providing a moment of satisfaction for those who just wish the band would stick with its Mindcrime sound.

The single ‘If I Were King’ has thrown some listeners, but in the context and pacing of the album it works well. It may not have been my choice for first single but I can understand why it was selected: while it’s not overly indicative of the musical style of the album as a whole, it’s a good thematic introduction. And although this puts me at odds with some QR fans, I really liked their Q2K album and this track is a bit of a reminder of that sound (and it’s no coincidence, given that American Solider includes production and guitar contributions from Gray, who was with the band for Q2K). But once again, those who may be put off the album by the sound of this single needn’t worry: American Soldier is more riffy, dark and intense than this one track would indicate.

‘If I Were King’ is followed by the powerful and very very loud ‘Man Down!’ which has a huge drum sound and a bed of evolving, churning guitars. There’s also another harmonized Wilton solo which once again recalls the Mindcrime sound without directly copying it. 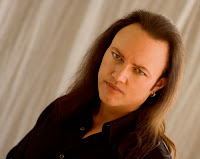 In ‘Home Again,’ Tate plays the role of a father who is overseas on duty, while his 10-year-old daughter Emily Tate voices the little girl at home, missing her dad. The song is played out as letters back and forth between father and daughter, both saying pretty much the same things to each other while thousands of miles apart. I’m sure that somewhere not too far below the surface the two Tates are drawing parallels between Geoff being off on tour, and a parent being away at war. Emily’s naïve voice expresses the song’s central sentiment in a realistic and naturalistic way which cuts through in a way that perhaps a more theatrical vocalist couldn’t. Finally, American Soldier is capped off with ‘The Voice,’ which includes recordings of Tate’s own father talking about his experiences at war. Musically it’s another strong song, but thematically it’s devastating: a wounded soldier is laying wounded, thinking what may be a dialog with a higher power, or their conscience, or perhaps the distant ghost of comforting memories.

American Soldier may very well be Queensryche’s best moment since Promised Land, and the way the band is handling the marketing of the album is very sensitive and true to the message. Those looking for another Empire may be disappointed, but those with an open mind who are looking to be moved and rocked will have their heart torn by the narrative, and their butts thoroughly kicked by the music.

The video for Queensryche’s new single is online at Miltary.com right now. Go check it out! I receieved an advance copy of the album yesterday and it’s pretty great, especially if you’re into some of Queensryche’s darker, more atmospheric works like I am.
American Soldier is released March 31 on Rhino.

Check out the sample of Devin Townsend’s forthcoming ‘Ki’ album on his Myspace. I’m pretty freaked out (in a good way) by this sampler, and I especially like the lighter-sounding stuff. I’ve always been a huge Devy fan and it’s great to see him exploring more melodic, clean-toned territory, which he’s dabbled in a little before but never enough to my greedy liking.