Schecter has plenty of great Robert Smith models (as you may have seen in this article) and they’ve just added another: the UltraCure-XII, a 12-string version of his signature guitar featuring a Diamond Adjustable-12 bridge, Schecter locking tuners, Seymour Duncan ’59 humbuckers with push-pull coil splits, mahogany body and mother-of-pearl block inlays. Head to this link for more info. END_OF_DOCUMENT_TOKEN_TO_BE_REPLACED

I encourage everyone to pop on a pair of headphones and listen to a few songs by The Cure – especially if you’ve never really paid close attention before. You’ll hear how a few simple melodic ideas can be blended together to form a much more complex whole. It’s really intriguing to listen to and learn from how each instrument works together, especially when the six-string bass is used: often Robert Smith might play a high melody while Simon Gallup plays a more traditional bassline, but sometimes these roles become cloudy: Gallup will play a more wandering melody while Robert plays something more anchored. The lines really become blurred between the roles of each instrument in service of the song. Robert Smith, Reeves Gabrels and Simon Gallup all have current signature model instruments to help them get their sound. Let’s have a look at them all.  END_OF_DOCUMENT_TOKEN_TO_BE_REPLACED

The Cure’s Robert Smith has long been known as one of the most visible proponents of the six string bass. Or the baritone guitar. Or whatever you want to call it. Of course, back in the day Smith used a Fender Bass VI to achieve the distinctive low end warmth of certain Cure tracks, but today he gets those sweet, sweet low sounds courtesy of a Schecter signature model. Smith has been playing his regular UltraCure guitar for years. But now there’s this:

END_OF_DOCUMENT_TOKEN_TO_BE_REPLACED

It seems that in the current musical climate, a lot of people are discovering (or rediscovering) the Cure. Their influence on bands like AFI and A Perfect Circle has turned a new generation onto the moody, atmospheric sounds of flanged chords and baritone guitars. 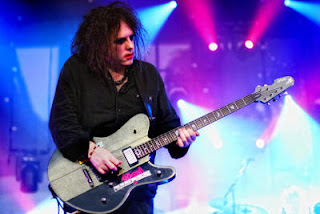 A key element of the Cure sound is the use of baritone guitars, and not of the ‘downtuned metal axe’ variety. The Cure sound is often built around a Fender Bass VI, the same instrument Nigel Tufnel declared too valuable to even look at in This Is Spinal Tap. This instrument looks a lot like a Fender Jaguar, but it’s tuned a full octave lower. It doesn’t quite sound like a bass, and you can still play chords on it without the sound turning to low-end mush, but it sounds especially great around the middle of the neck. You can approximate this sound by using a regular guitar in standard tuning and staying around the lower strings but you’ll notice that the tone sounds ‘looser’ than the real thing because the string tension is completely different even though you might be playing notes of the same pitch. To compensate for this a little, pick right up near the bridge. This will give you at least a hint of the characteristic treble bite of the Fender Bass VI, and will also reduce pitch drift. The rigidity of the note is a big part of why the Bass VI is so unique, and why it’s also used by Placebo to add solid rhythm behind Brian Molko’s more jangly edge.

Another important part of the Cure’s sound is their use of keyboards. This poses certain challenges to us guitarists, but you don’t need to spend thousands on a guitar synth. Many multi effect units include synth patches which manipulate your incoming guitar signal in a way which imitates the sound of analog synths. These are especially useful if you can blend in the original, unaffected guitar sound. Sometimes these settings don’t hold up so well on their own, but mixed at about 60-70% of the volume of the straight guitar sound, they can be very useful. You might also try using a reverb pedal with the original note turned all the way down, set for about a second of reverb with very fast reflection, then fed into a compressor and a delay. Tremolo-pick the hell out of the note, and you can get somewhere close to the keyboard sounds of The Cure’s classic ‘Fascination Street.’

CLICK HERE to try to luck out on a Fender Bass VI on eBay.