WOO! As a huge Faith No More fan this news has totally made my day/week/month/year/decade. Faith No More’s Billy Gould has confirmed to Rolling Stone that the band is making a new album for release in 2015. In fact, he says they’re pretty far into the process already, and it’ll be released on the band’s own label, Reclamation Records, which will be distributed via vocalist Mike Patton’s Ipecac Recordings. The first single from the album will be a studio version of the song “Motherfucker” (which they debuted at London’s Hyde Park in July), which will be released on a seven-inch and limited to 5,000 copies as part of Record Store Day’s Black Friday (November 28). END_OF_DOCUMENT_TOKEN_TO_BE_REPLACED 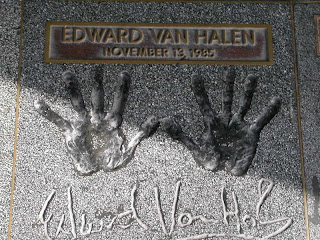 OUCH! Eddie Van Halen is recovering from hand surgery which has left him unable to play for months.

According to this story on RollingStone.com, Eddie said:

“During the last leg of our tour, I started developing pain in my thumb and my pinky. I didn’t think much of it at the time,” the guitarist says. “It got progressively worse to the point that about three months ago I wasn’t able to play at all. My pinky and my thumb were totally locked up and felt like there was something broken.”

Van Halen sought out specialists in Düsseldorf, Germany, who initially began treating the guitarist for arthritis, but soon discovered a bone spur, twisted tendon and a cyst in the joint of his left thumb.

“They said the only way to fix it was surgery, which of course scared the shit out of me, but I was told it was the only way to fix it,” Van Halen says. “Surgery was a success, now I just have to let it heal. I am totally jazzed that they found the problem, fixed it and in about four months my hand will feel like I am 18 again. Thank God.”

Now, I’m aware that EVH is most likely a very wealthy guy, and that he’s had a number of career missteps and personal demons over the years that have put a few fans off-side, but I think it’s every guitarist’s duty to donate some cash to pay for Eddie’s medical costs. The man wrote friggin’ ‘Eruption,’ for crying out loud. Send funds to me via PayPal to justkiddingimgoingtousethemoneytobuyanevhwolfgang@fakegmail.com

[/geo-out]
By the way, check out this excellent article on hand anatomy at the Classical Guitar Blog.