PRESS RELEASE: One of the most venerated guitarists ever to grace hard rock music, the late, great Randy Rhoads (heralded as the legendary lead guitarist for Ozzy Osbourne and Quiet Riot) will be celebrated in the truest of fashions with the release of Immortal Randy Rhoads – The Ultimate Tribute on March 3, 2015 via UDR Music.

I’m stopping by the Taylor booth at NAMM today but before that, lemmie post this here news item for ya. There’s lots more cool Taylor stuff to come though! 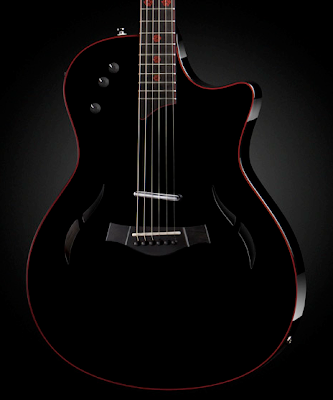 ANAHEIM, Calif. – January 16, 2010 – For the versatile rocker, no guitar can speak as loudly or as delicately as the award-winning Taylor T5, the industry’s best-selling electric/acoustic hybrid guitar. Just ask Serj Tankian, the accomplished, creative frontman and songwriter for the Grammy® award-winning rock band System of a Down. Tankian, who recently released his first solo album, Elect the Dead, has played Taylor acoustic guitars for several years, and has spent the past two years touring with a Taylor T5. Now, Tankian brings his creative input, coupled with the expertise of Taylor’s design team, to his own signature model, the STSM-T5.

The STSM-T5 is based on the popular T5-C and features a sleek, thinline opaque black body, crafted from sapele and paired with a maple top. Two stylized, unbound f-holes grace the top, and the fretboard and peghead feature a red “energy wheel” inlay design that was provided by Tankian. The same vibrant red binds the body, fretboard and peghead. Says Tankian of his T5: “The way the T5 is designed, especially when playing in an arena environment, sounds like a great acoustic and is by far superior to anything else in terms of sound, clarity, depth and tone. When I’m writing music or lyrics, I’m just pouring whatever comes out of me from the universe and channeling it and structuring it into a quality record.”

The versatility of this guitar lies in Taylor’s proprietary T5 electronics and five-way switching, which together yield a wide range of guitar tones, from delicate acoustic to full-on electric crunch. Three magnetic pickups – an under-fretboard neck humbucker, a visible bridge humbucker, and an acoustic body sensor mounted to the inside surface of the top – provide a complete integration of tonal output. “I try to make music in a way that I’d be interested in listening to it myself,” Tankian says. “Using the T5 gives me the versatility of a pure acoustic sound or electric. It’s light and thin too, so you can stand in front of the mic and just rock out. For a stage environment, the T5 works great.”

The STSM-T5 is offered at a suggested retail price of $3,198 and comes in a ready-to-rock hardshell case with a certificate of authenticity signed by Tankian. The STSM is available at authorized Taylor dealers worldwide.

To experience the company’s new guitars, artist performances, or to learn more about Taylor Guitars, please visit the Taylor Guitars booth on the second floor of the Anaheim Convention Center, Room 213.